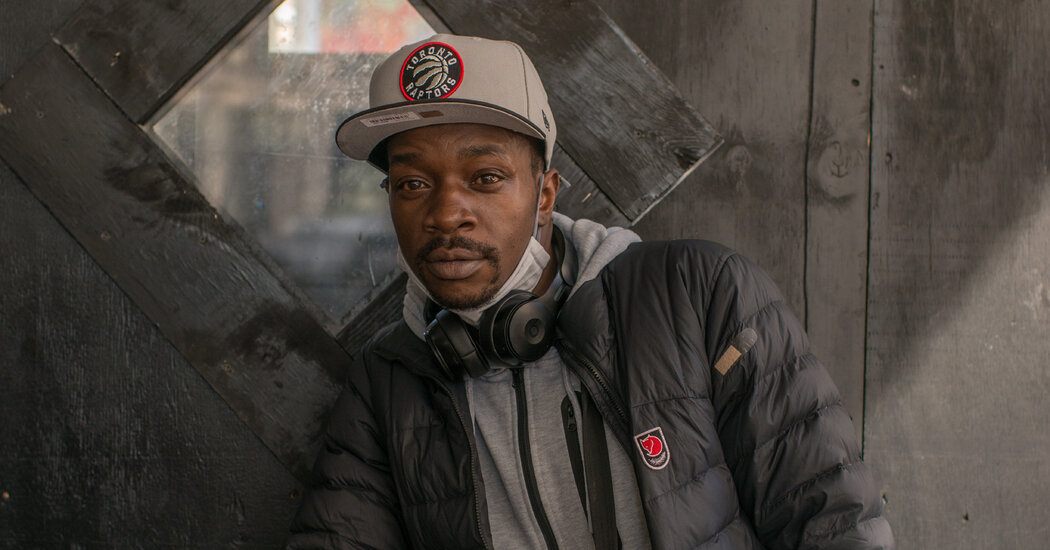 For most Americans, the third stimulus payment, like the first two, arrived as if by magic, landing unprompted in the bank or in the mail.

Charlie Velez, sitting on a milk crate outside the Grand Street subway station on the Lower East Side last month clinking 65 cents in a paper cup, is 0 for 3 on stimulus checks. “I didn’t know the process,” he said.

Mr. Velez, born in Brooklyn 58 years ago, appears to qualify and could still collect all three payments, totaling $3,200, if he filed a 2020 tax return.

But he has not filed taxes in years. The closest he comes to the banking system is when he sleeps in an A.T.M. vestibule on Delancey Street. Mr. Velez said that though outreach workers occasionally approached him to offer help, when it came to the stimulus, “No one has mentioned it to me.”

Just about anyone with a Social Security number who is not someone else’s dependent and who earns less than $75,000 is entitled to the stimulus. But some of the people who would benefit most from the money are having the hardest time getting their hands on it.

“There’s this great intention to lift people out of poverty more and give them support, and all of that’s wonderful,” said Beth Hofmeister, a lawyer for the Legal Aid Society’s Homeless Rights Project. “But the way people have to access it doesn’t really fit with how most really low-income people are interacting with the government.”

Interviews with homeless people in New York City over the last couple of weeks found that some mistakenly assumed they were ineligible for the stimulus. Others said that bureaucratic hurdles, complicated by limited phone or internet access, were insurmountable.

James Keyes, 50, sitting outside a Starbucks at Atlantic Terminal in Brooklyn one recent evening, did not think he qualified. “I don’t even have a phone,” he said. “I don’t have any identification at all.”

Paradoxically, the very poor are probably the most likely people to pump stimulus money right back into devastated local economies, rather than sock it away in the bank or use it to play the stock market.

“I’d find a permanent place to stay, some food, clothing, a nice shower, a nice bed,” said Richard Rodriguez, 43, waiting for lunch outside the Bowery Mission last month. “I haven’t had a nice bed for a year.”

Mr. Rodriguez said he had made several attempts to file taxes — a necessary step for those not yet in the system — but had given up.

“I went to H&R Block and I told them I was homeless,” he said. “They said they couldn’t help me.”

Near him in line was a man who gave his name only as Polo. Before the pandemic, Polo said, he worked at a warehouse in Maryland. He received the first stimulus payment last year. But after losing his job, he closed his bank account because he was being charged for having a low balance.

Polo said that according to the I.R.S. website, his second stimulus check, sent to most people in early January, was “still processing.” He has heard nothing about the third payment, which was $1,400. “When you call the toll-free I.R.S. number,” he said, “they put you on hold for an hour.”

The number of eligible people who have not claimed their stimulus money appears to be unknown, though the I.R.S. said it had reached out to nine million people who did not typically file tax returns to tell them about the stimulus.

The city Department of Social Services said its staff and contracted providers were working to help people register for and receive stimulus money. The city and the I.R.S. both list places that offer free tax help, including a few walk-in spots that don’t require appointments. But many people interviewed did not know about them.

Terrance Wells, 37, who was hanging out in front of Penn Station, said a friend had tried to help him access the stimulus payments.

“It never went through,” he said. “It never gave us the right form to fill out or anything.”

The free market has offered a rather harsh solution to those mystified by the system. Steven Todd, 53, who lives at the Mainchance shelter in Manhattan, said that “educated guys who work in finance” had approached homeless people and offered to get them their stimulus money — for a commission of several hundred dollars.

“People were happy to get anything,” he said. “It wasn’t fair.”

Outside the HELP Women’s Shelter in the East New York neighborhood of Brooklyn last month, Rebecca Robertson, 27, said she did not receive the first two checks because she was in jail. But a federal judge ruled last fall that incarcerated people were entitled to stimulus payments. Ms. Robertson said she filed her taxes online over the weekend.

“I’m just trying to get an apartment and a job so I can get my daughter out of foster care,” she said.

Some groups that assist the homeless offer stimulus help when they distribute meals and clothes, including the Coalition for the Homeless’s nightly food line on East 51st Street and New York City Relief’s morning pop-ups in Manhattan and the Bronx.

Mr. Haken of New York City Relief said some hurdles were easier to clear than others.

He described how he would help someone without identification cash a check: “What he’d have to do is get some kind of benefit card with his face on it — something like a soup kitchen ID,” Mr. Haken said. He would then need to sign over the check to someone with a bank account in front of a banker who was willing to say, “That’s good enough.”

Zac Martin, pastor of the Recovery House of Worship in Downtown Brooklyn, said his church has let homeless people store belongings there so that when they go to a government office to apply for the city-issued ID known as IDNYC, they can get through the metal detector.

“I saw him last week,” Mr. Martin said. “We do a grocery pantry on Saturdays. He slipped me a $50 bill and said, ‘I’m really grateful for your work — keep going.’”