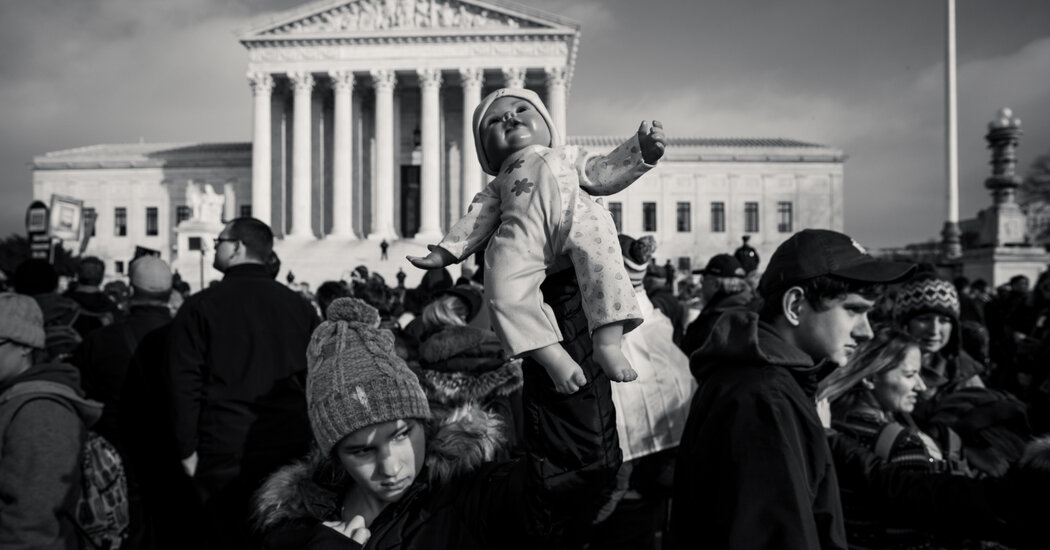 The anti-abortion movement was never going to stop with overturning Roe v. Wade.

For years, Republicans have argued that their goal was to return the issue of abortion to the states. At no point was this believable; since 1984, the Republican Party platform has called for a constitutional amendment banning abortion. Having spent decades denouncing abortion as a singular moral evil, the anti-abortion movement will not be content to return to a pre-Roe status quo, where abortion was legal in some places but not others.

So it’s not that surprising that, with the possible end of Roe in sight, some opponents of abortion are thinking about how to ban it nationally. Last week my colleague Ross Douthat wrote about a debate within the anti-abortion movement sparked by a highly abstruse article by the Notre Dame professor John Finnis in the Catholic journal First Things. Finnis argues that fetuses are persons under the 14th Amendment, and that the Supreme Court should thus rule abortion unconstitutional. The political implication, wrote Douthat, is that just jettisoning Roe is “woefully insufficient.”

Finnis’s contention is radical, but apparently resonant. Damon Linker, a former editor at First Things and author of a book about the Catholic right, writes, “That is where the pro-life movement is headed — and the rest of the country better be ready for it.”

The threat isn’t immediate; it’s highly unlikely that this Supreme Court is going to adopt constitutional personhood. The justices are “not interested in reading the Constitution to protect life from the moment of conception,” said Nancy Northup, president of the Center for Reproductive Rights, a legal group. “It would make so many things so incredibly difficult to give a fertilized egg all the rights and protections of a born human being.”

But the embrace, by some, of Finnis’s proposition is the latest sign of the right’s disenchantment with democracy, and its dream of imposing on the American people a regime that a majority of them will never consent to. Even Mississippi, after all, rejected fetal personhood in a 2011 referendum.

The anti-abortion movement has always had authoritarian underpinnings; forcing women to give birth against their will would require police-state surveillance and coercion. (It’s certainly more intrusive than being made to wear a mask, which some conservatives regard as tyranny.) But as long as abortion opponents were fighting for the ability of state legislatures to pass laws their voters wanted, they could claim to be upholding democracy, albeit a form that traduced individual rights.

The 14th Amendment strategy, by contrast, is a plan to ignore voters altogether. It’s not surprising that it would gain currency at a moment when the right is going all-in on minority rule.

The argument Finnis made isn’t new; the scholar Nathan Schlueter made a similar case in First Things in 2003. What is new is how seriously it’s being taken. The notion that the 14th Amendment applies to fetuses seems, on the surface, preposterous. The amendment’s first sentence defines citizens as “all persons born or naturalized in the United States.” Back in 2003, Robert Bork wrote a dismissal of Schlueter’s argument rooted in originalism, the idea, once prevalent on the right, that the Constitution should be interpreted as it would have been understood when written.

The Supreme Court justice Antonin Scalia similarly rejected the idea that the 14th Amendment applies to fetuses: “I think when the Constitution says that persons are entitled to equal protection of the laws, I think it clearly means walking-around persons,” he said in 2008.

But many on the right have grown weary of originalist doctrine. As the reactionary Harvard law professor Adrian Vermeule wrote in The Atlantic last year, originalism “has now outlived its utility.” In a legal world dominated by liberalism, he wrote, originalism was a “useful rhetorical and political expedient,” but the conservative takeover of the judiciary has proceeded far enough that it can be dispensed with.

Instead, he endorsed what he called “common-good constitutionalism,” an understanding of constitutional law that, among other things, “does not suffer from a horror of political domination and hierarchy, because it sees that law is parental, a wise teacher and an inculcator of good habits.”

Douthat is hesitant about the 14th Amendment strategy because he believes that ending abortion in America — his goal — requires winning over the American people. He knows that supporters of abortion rights insist that legal abortion is a precondition for women’s well-being and equality. The anti-abortion movement, Douthat wrote, “needs to prove the pro-choice premise wrong.”

But the anti-abortion movement can’t do that, because, as the experience of every country that has ever banned or severely restricted abortion shows, the pro-choice premise is correct. In this sense, the people pushing for a Supreme Court declaration of constitutional personhood have a point. If your aim is a near-total abortion ban in a rapidly secularizing country with a younger generation that largely despises the right, democracy isn’t your friend.

Finnis acknowledges that if the Supreme Court does what he wants, it would “meet unimaginable resistance,” but he doesn’t seem to find this relevant. After all, that’s the point: People shouldn’t have a choice.