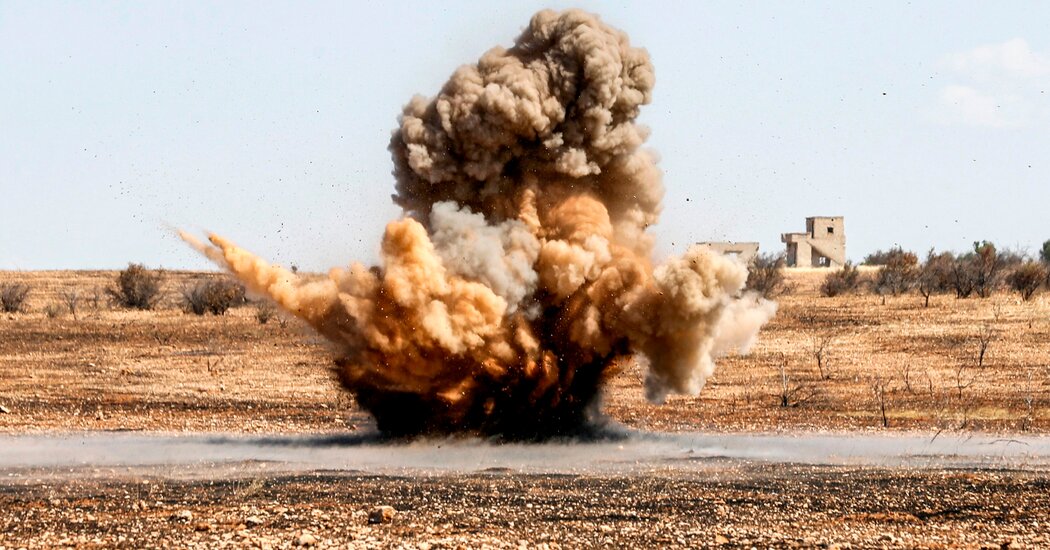 WASHINGTON — The Defense Department announced Tuesday that it would retain the Trump administration’s policy and keep antipersonnel land mines in its arsenal, reserving the right to use them in war.

In a statement, Mike Howard, a Pentagon spokesman, called such weapons “a vital tool in conventional warfare” that the military “cannot responsibly forgo, particularly when faced with substantial and potentially overwhelming enemy forces in the early stages of combat.”

The announcement drew swift condemnation from human rights groups. The Pentagon press secretary, John Kirby, subsequently addressed the issue with reporters, saying Mr. Howard’s words were “accurate and factual,” but he added that the land mine policy was under review.

The current policy dates to Jan. 31, 2020, when Mark T. Esper, the secretary of defense under President Donald J. Trump, announced a major change to the Pentagon’s policy on antipersonnel land mines, small explosive weapons that are buried underground or laid on the surface and meant to kill or maim people. Their use was permitted so long as the weapons had self-destruct features or could self-deactivate.

Mr. Esper’s decision followed Mr. Trump’s cancellation of a presidential directive signed by President Barack Obama in 2014 that limited the use of so-called persistent mines, which stay deadly indefinitely, to the Korean Peninsula

“We are analyzing Secretary Esper’s decision, his policy of January 2020,” Mr. Kirby told reporters on Tuesday. “When we complete that analysis of that decision, then we will be able to have a better idea of whether or not further review of our land mine policy is warranted.”

Older types of antipersonnel land mines can remain deadly for many decades and are banned by 164 countries. Their use has been condemned because of the indiscriminate manner in which they operate: Most will explode when stepped upon, no matter whether by an enemy fighter or a noncombatant.

Antitank land mines, which contain larger explosive charges and are devised to disable or destroy armored vehicles, are not banned under international law.

In 1997, a treaty to ban antipersonnel land mines was opened for signature in Ottawa, Canada, and went into effect in March 1999. Often referred to as the Ottawa Convention, it prevents party nations from using or developing land mines meant to harm people, and commits those countries to destroying their existing stockpiles. The United States has refused to sign the treaty, along with China, India, Russia, North Korea, South Korea, Pakistan and Iran, among others.

That President Biden might continue to support the use of antipersonnel land mines came as a disappointment to many human rights groups, which expected him to sign the treaty, based on comments he made on the campaign trail.

“This land mine policy starkly sets the U.S. apart from its allies,” said Adotei Akwei of Amnesty International. “It is in direct opposition with President Biden’s aspirations to be a global human rights leader — for the United States to truly be a leader, it must change its land mines policy as soon as possible.”

For decades, Democratic lawmakers like Senator Patrick J. Leahy of Vermont and Senator Dianne Feinstein of California have opposed the Pentagon’s support for the weapons.

“I have spoken to President Biden about this over many years, and I’m confident that his administration will do the right thing and renounce these indiscriminate weapons that have no place in the arsenal of civilized nations,” Mr. Leahy said.

At the United Nations, where the Mine Action Service plays an important role in clearing antipersonnel mines from former war zones, the Defense Department’s reiteration of the Trump-era policy seemed to come as a surprise.

Stéphane Dujarric, a spokesman for the United Nations, said he had no immediate comment. But his answer was emphatic when asked whether the United States and other countries that had not signed the treaty banning land mines should do so.

“The money that is spent clearing them, the damage that is left by land mines that are left behind, the children that are killed, the land that cannot be used because land mines continue to be there, our stance against land mines has been very clear and will remain so,” he said.