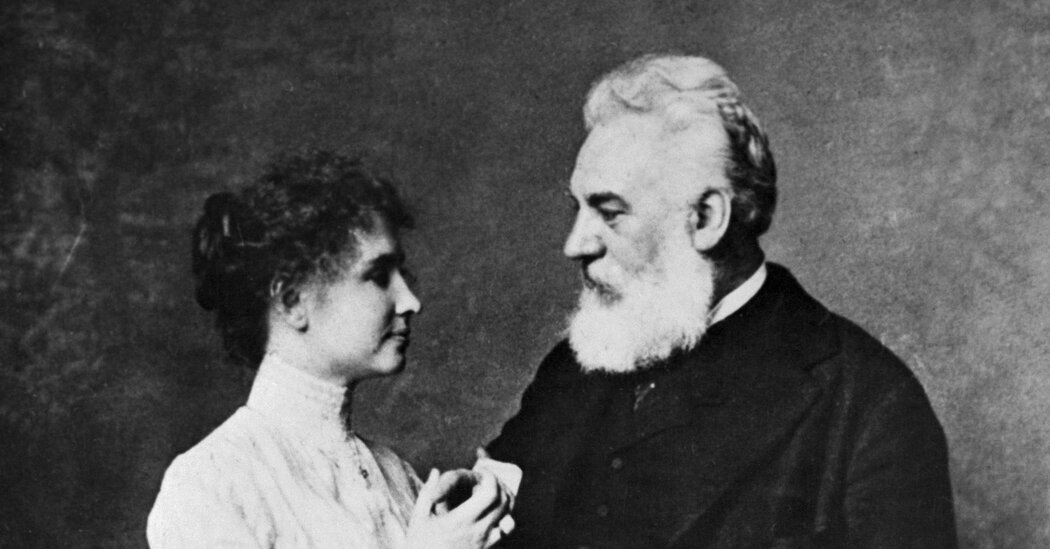 Born in Scotland in 1847, Bell was the son and grandson of elocutionists, and his driving passion was to understand how human beings create the sounds that make up speech. He produced a speaking machine that replicated a range of phonemes when properly aerated, and continued to tinker with ways of bringing forth spoken words where no such words had been heard before; he even tried to teach speech to his dog. His father had designed a universal alphabet to represent the mechanics of articulation, and Alexander Graham Bell lectured widely on its importance, certain that anyone would be able to verbalize any language transliterated into these symbols.

That anyone included deaf people. Bell believed that with the correct methods, they could learn to speak, and be integrated into the larger society. As he tried to understand hearing and sound, he stumbled into inventions. Though the telephone made him rich, he had relatively little emotional attachment to it, seeing it as a distraction from his wish to reform the education of deaf people. (Nevertheless, he devoted years to defending his patents, which some critics believe were granted unfairly; if Bell did invent the telephone, he stood on the shoulders of giants.)

Mabel had lost her hearing as a child, a consequence of scarlet fever, after learning some speech, and she was able to master verbal communication anew. Bell believed that others would share her aptitude if properly taught. But he did nothing to lift the stigma that even she associated with her condition; Mabel long refused to socialize with other deaf people because to do so “instantly brought the hardly concealed fact [of my own deafness] into evidence.”

Bell seems to have been disconnected from most human drama; the man Booth describes sounds as though he may have been on the mild end of the autism spectrum, as many great inventors are. She believes he was lonely in his later life, rather a sad man, but the evidence she presents suggests he was merely a loner in his intellectual adventures and, Mabel notwithstanding, not much drawn to intimacy. His mind was fixed on the human voice, and everything else came second, including his own family. That detachment perhaps explains the failures of empathy that poisoned his relationship with the very people he wished to serve. Mabel said: “Your deaf mute business is hardly human to you. You are very tender and gentle to the deaf children, but their interest to you lies in their being deaf, not in their humanity.”

Immune to the beauty of sign language, Bell never saw deafness as anything more than a deficit, though already in his day deaf people were organizing around the defense of their language and society. The oralism Bell championed was a disaster for the deaf. While examples abound of deaf people who have mastered speech, they do not represent the larger deaf community; an acuity at producing sounds is a splinter talent. Moreover, instructing deaf people on the mechanics of speech is terribly time-consuming, and those who aspire to this skill can do so only by ignoring all other domains of education. Deaf people in a signing environment are likely to learn mathematics and science and literature, while those raised orally learn pronunciation and little else. Finally, oralism implicitly teaches a kind of self-abnegation — that deaf people are of value only insofar as they can approximate another kind of person. Devoted oralists believed that sign language should be forbidden in oralist environments, which meant that language acquisition in oralist schools was painfully gradual. Without early language development, as Booth notes, the human mind cannot fully develop, and many children taught orally acquire little or no language during the crucial window of brain plasticity.