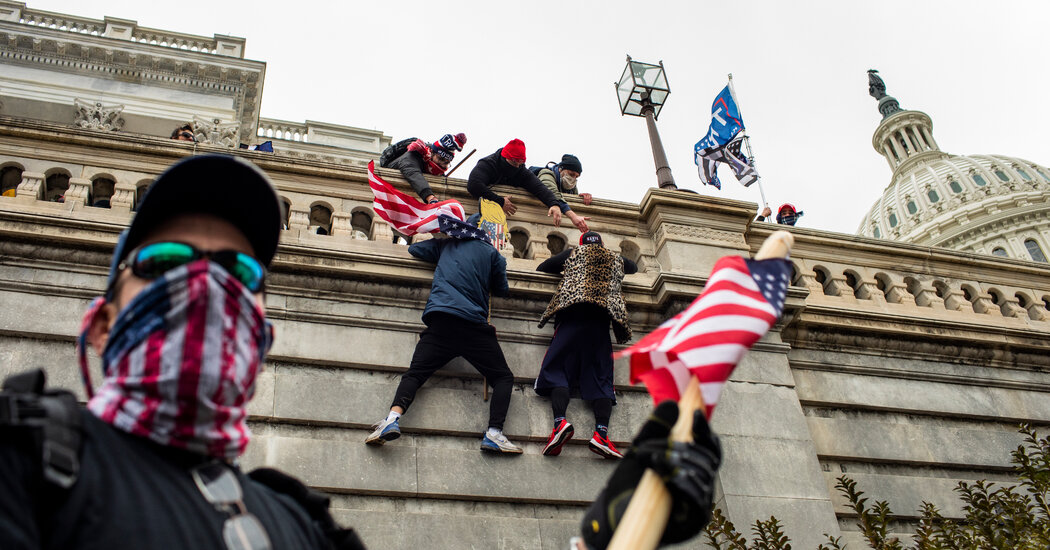 When the political scientist Robert Pape began studying the issues that motivated the 380 or so people arrested in connection with the attack against the Capitol on Jan. 6, he expected to find that the rioters were driven to violence by the lingering effects of the 2008 Great Recession.

But instead he found something very different: Most of the people who took part in the assault came from places, his polling and demographic data showed, that were awash in fears that the rights of minorities and immigrants were crowding out the rights of white people in American politics and culture.

If Mr. Pape’s initial conclusions — published on Tuesday in The Washington Post — hold true, they would suggest that the Capitol attack has historical echoes reaching back to before the Civil War, he said in an interview over the weekend. In the shorter term, he added, the study would appear to connect Jan. 6 not only to the once-fringe right-wing theory called the Great Replacement, which holds that minorities and immigrants are seeking to take over the country, but also to events like the far-right rally in Charlottesville, Va., in 2017 where crowds of white men marched with torches chanting, “Jews will not replace us!”

“If you look back in history, there has always been a series of far-right extremist movements responding to new waves of immigration to the United States or to movements for civil rights by minority groups,” Mr. Pape said. “You see a common pattern in the Capitol insurrectionists. They are mainly middle-class to upper-middle-class whites who are worried that, as social changes occur around them, they will see a decline in their status in the future.”

One fact stood out in Mr. Pape’s study, conducted with the help of researchers at the Chicago Project on Security and Threats, a think tank he runs at the University of Chicago. Counties with the most significant declines in the non-Hispanic white population are the most likely to produce insurrectionists. This finding held true, Mr. Pape determined, even when controlling for population size, distance to Washington, unemployment rate and urban or rural location.

Law enforcement officials have said 800 to 1,000 people entered the Capitol on Jan. 6, and prosecutors have spent the past three months tracking down many of them in what they have described as one of the largest criminal investigations in U.S. history. In recent court filings, the government has hinted that more than 400 people may ultimately face charges, including illegal entry, assault of police officers and the obstruction of the official business of Congress.

In his study, Mr. Pape determined that only about 10 percent of those charged were members of established far-right organizations like the Oath Keepers militia or the nationalist extremist group the Proud Boys. But unlike other analysts who have made similar findings, Mr. Pape has argued that the remaining 90 percent of the “ordinary” rioters are part of a still congealing mass movement on the right that has shown itself willing to put “violence at its core.”

Other mass movements have emerged, he said, in response to large-scale cultural change. In the 1840s and ’50s, for example, the Know Nothing Party, a group of nativist Protestants, was formed in response to huge waves of largely Irish Catholic immigration to the country. After World War I, he added, the Ku Klux Klan experienced a revival prompted in part by the arrival of Italians and the first stirrings of the so-called Great Migration of Black Americans from the rural South to the industrialized North.

In an effort to determine why the mob that formed on Jan. 6 turned violent, Mr. Pape compared events that day with two previous pro-Trump rallies in Washington, on Nov. 14 and Dec. 12. While police records show some indications of street fighting after the first two gatherings, Mr. Pape said, the number of arrests were fewer and the charges less serious than on Jan. 6. The records also show that those arrested in November and December largely lived within an hour of Washington while most of those arrested in January came from considerably farther away.

The difference at the rallies was former President Donald J. Trump, Mr. Pape said. Mr. Trump promoted the Jan. 6 rally in advance, saying it would be “wild” and driving up attendance, Mr. Pape said. He then encouraged the mob to march on the Capitol in an effort to “show strength.”

Mr. Pape said he worried that a similar mob could be summoned again by a leader like Mr. Trump. After all, he suggested, as the country continues moving toward becoming a majority-minority nation and right-wing media outlets continue to stoke fear about the Great Replacement, the racial and cultural anxieties that lay beneath the riot at the Capitol are not going away.

“If all of this is really rooted in the politics of social change, then we have to realize that it’s not going to be solved — or solved alone — by law enforcement agencies,” Mr. Pape said. “This is political violence, not just ordinary criminal violence, and it is going to require both additional information and a strategic approach.”

Mr. Pape, whose career had mostly been focused on international terrorism, used that approach after the Sept. 11 attacks when he created a database of suicide bombers from around the world. His research led to a remarkable discovery: Most of the bombers were secular, not religious, and had killed themselves not out of zealotry, but rather in response to military occupations.

American officials eventually used the findings to persuade some Sunnis in Iraq to break with their religious allies and join the United States in a nationalist movement known as the Anbar Awakening.

Recalling his early work with suicide bombers, Mr. Pape suggested that the country’s understanding of what happened on Jan. 6 was only starting to take shape, much like its understanding of international terrorism slowly grew after Sept. 11.

“We really still are at the beginning stages,” he said.