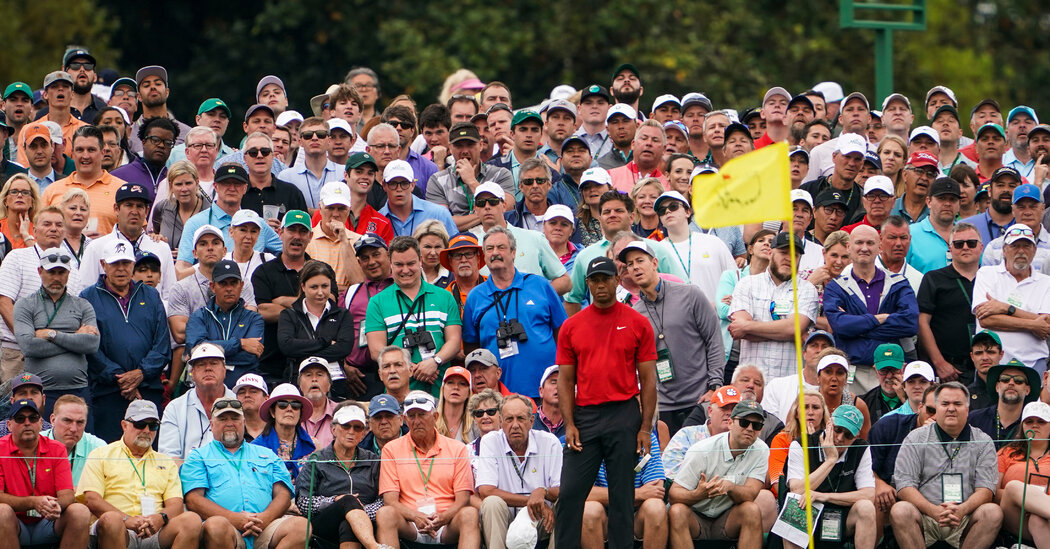 AUGUSTA, Ga. — The Masters Tournament, after an aberrant autumn appearance five months ago, returns this week to its customary place as a ritual of spring, and golf fans will find familiar the sight of vibrant azalea bushes and blooming magnolia trees. But beyond aesthetics at the Augusta National Golf Club, this year’s Masters may be at a crossroads, when golf’s most tradition-bound event turns a new page.

Slightly more than a year ago, the energy driving the golf world was a fervent zeal to watch Tiger Woods defend his seismic 2019 Masters victory. Now, the next chapter of the Tiger era at the Masters remains wholly undefined. Because of the serious leg injuries he sustained in a February car crash, Woods will not compete at the Masters, something that has happened three times since 2014.

This absence, however, is altogether different.

Woods’s future as a competitive golfer is unclear, and the Masters marches on without the person at the cynosure of the tournament’s dominant narrative for nearly 25 years.

“You can’t go to Augusta and not think about the guy,” Curtis Strange, a two-time United States Open champion who is now a broadcaster for ESPN, said last week of Woods. “He changed the game as we knew it right in front of our very eyes at Augusta.”

But the void that Woods’s absence creates at the Masters could serve to underscore the most dramatic transformation in men’s professional golf: a changing of the guard at the top of the weekly leaderboard. New, younger personalities have stormed into the spotlight vacated by Woods, 45, and some of his contemporaries, like Phil Mickelson, who will turn 51 in June. The game has seen an infusion of not just youth, but players with back stories alluring enough to ease the transition.

For example, a year ago, Bryson DeChambeau was still an eccentric curio on the PGA Tour, known more for his quirks than his accomplishments. In 2020 and continuing into this year, DeChambeau, 29, has been the dominant force in golf even when he is not on the course. With an intense fitness regimen and hard-swinging power game that launched prodigious drives, DeChambeau forced his rivals to reconsider everything, including their course strategies and their diets. Moreover, he captivated golf fans as a new breed of golfer in an age-old sport — daring, showy and charismatic.

DeChambeau also backed up his boasts of reinventing golf by bludgeoning the 2020 United States Open field, and a venerable golf course, to claim a runaway victory that verified his status as a phenomenon. DeChambeau has not gone away, with one PGA Tour victory and a tie for third place at the Players Championship last month. It’s true that DeChambeau conspicuously failed to overpower Augusta National in November, but the golf course in the firm conditions of spring — as opposed to the soft fairways that greeted competitors in November — will give him another opportunity to prove that his brawny style can prevail.

“He’s certainly got the talent, and maybe learning from the November experience will be very beneficial for him,” Nick Faldo, a three-time Masters champion and now a CBS broadcaster, said of DeChambeau last week.

DeChambeau, who has never putted well on Augusta National’s slick greens in four previous Masters appearances, is not backing down.

“I’m definitely hitting it a lot further than I was in November of last year,” he said in March, looking ahead to the Masters. “So there are some places that I will look at taking a line that’s going to be a little different than last time.”

DeChambeau, the world No. 5, is not the only golfer under 30 years old among the top contenders this week. Thirteen of the top 25 ranked golfers, including four of the top five, are in their 20s. Many come with pedigrees, like world No. 2 Justin Thomas, 27, who last month added a Players Championship victory to go with the P.G.A. Championship he won in 2017. Ranked fourth worldwide, Collin Morikawa, 24, already has a tour victory this season and won last year’s P.G.A. Championship. Jon Rahm, 26, is the world’s third-ranked golfer and has had five top-10 finishes in his seven events this year. Xander Schauffele, 27, is No. 6 in the world rankings and tied for second in the 2019 Masters.

There are factors working against a new generation of players leaping to the forefront of golf’s most-watched event this week, notably the accepted canon that a Masters champion must have acquired a wealth of practiced knowledge about the Augusta National layout to win. But the current crop of young players may be fast-tracking the learning curve.

Or as Zach Johnson, the 2007 Masters champion, said last month in a telephone interview: “You can have plenty of experience at 27 years old. There could be four Masters champions in a six-year span that are under 30. That would not surprise me in the least.”

Jordan Spieth, who won the 2015 Masters when he was 21, is another young golfer whose recent form makes him a candidate to be slipping on a green jacket after the final round on Sunday. Spieth has won three major golf championships, but had gone nearly four years without a tour victory until he won the Valero Texas Open on Sunday. Spieth’s revival has put him back in the mix, and he insists that his age group is positioned to make a run at several Masters championships. He did not rule out crowning a champion who was playing in his first Masters, something that has not happened since Fuzzy Zoeller won the tournament in 1979.

“I wouldn’t be surprised going forward if you end up getting a first-time winner at some point or a number of young guys that are able to do it,” Spieth said last week.

Spieth said Augusta National’s extremely hilly terrain, a feature that is hard to grasp from watching the event on television, might especially benefit younger players.

“Honestly, it’s a tough walk, it’s one of the toughest walks on tour,” Spieth said of Augusta National. “Physically, it can take a toll. So you would think that guys that are in their mid-20s would be in the best position physically.”

Other less-than-household names within golf’s youth movement may have escaped the attention of casual golf fans but are nonetheless worthy contenders this week. Foremost in that group is Sungjae Im, 23, of South Korea, who was the PGA Tour rookie of the year in 2019 and tied for second in his Masters debut last year. No Asian has won the Masters, although that has not stopped Im from dreaming of a Korean-style menu that will be served at the annual champions-only dinner the year after he wins the tournament.

“Marinated ribs, of course,” he said in November with a grin.

There are few players of color in this year’s Masters field, although Tony Finau, who is of Tongan and Samoan descent finished tied for fifth in 2019 and is the world’s 13th ranked golfer. Vijay Singh, who is from Fiji and was the Masters champion in 2000, is also competing.

Change, like the passing of a torch from generation to generation, is in the air at the Masters despite the tournament’s reputation for time-honored traditions. And golf fans may already be warming up to the makeover taking place at the top of the leaderboards.

With the television viewership declining for other sports lately, the ratings for PGA Tour events this year have increased by 10 to 20 percent, and some in golf credit the surge to the increasing prominence of what Jim Nantz, the longtime CBS broadcaster, called “the new brigade.”

“We’ve arrived at a point now where we don’t have to rely on just Tiger,” Nantz said last week. “We all know how enormous his presence is — maybe he comes back one day, that’s not what we’re addressing here. But how does the sport transition to a time when he is not at the top of the game?”

Nantz continued: “There are so many interesting figures now that are competing at the highest level of our sport and them being certified as great players, people are going to watch more often.”