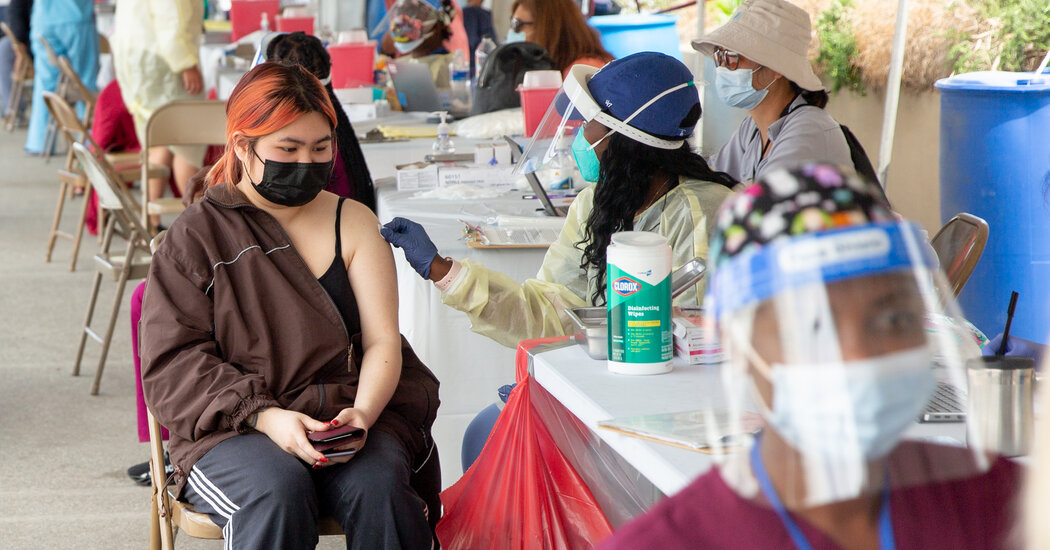 (This article is part of the California Today newsletter. Sign up to get it delivered to your inbox.)

Today, we’re starting with some big news: There will be no green tier after all. In fact, very soon, we’re set to say goodbye to the purple, red, orange and yellow tiers that have for months dictated so much about our lives.

California plans to lift all its coronavirus restrictions on June 15, provided there are enough Covid-19 vaccines available for anyone age 16 or older and hospitalizations remain low and stable, state officials announced on Tuesday.

The move will allow Californians — regardless of which county they live in — to return to restaurants, bars, movie theaters, houses of worship and concerts without strict capacity limits for the first time in more than a year. President Biden has said there will be enough vaccines available for all adults in the country by the end of May.

[If you missed it, read about how experts graded California’s vaccine rollout so far.]

Other states have already eased health restrictions at a time when the Biden administration is pleading with them not to make those changes just yet.

The country is facing a possible fourth surge of the virus, and there are concerns about the spread of virus variants. Coronavirus case counts have been climbing in many states.

But in California, cases have been declining since hitting a peak early this year, with an average of around 2,700 new cases a day now, the lowest figure since June.

And according to data from the Centers for Disease Control and Prevention, as of Monday, 34 percent of the state’s total population has received at least one vaccine shot, and 18 percent are fully vaccinated.

“With more than 20 million vaccines administered across the state, it is time to turn the page on our tier system and begin looking to fully reopen California’s economy,” Gov. Gavin Newsom said in a statement. “We can now begin planning for our lives post-pandemic.”

The state will, however, keep in place a mask mandate for the foreseeable future, and there will be some limits on large indoor events or conventions of more than 5,000 people at least until fall.

Over the past year, California has become a high-profile case study of the ways in which reopening a vast economy can be more complex, unequal and politically fraught than shutting one down.

California was the first state to implement a stay-at-home order last year, on March 19, plunging the state’s 40 million residents into the nation’s largest experiment in preventing transmission of the virus.

Since then, California has toggled among various levels of restriction as cases have surged, receded and then surged again, overwhelming hospitals in the winter, even as other states have allowed full reopenings.

The Newsom administration’s reopening strategies changed frequently and have been implemented piecemeal across the state’s 58 counties. They’ve been both widely criticized as confusing and credited with saving uncounted lives.

The latest announcement will lift what state leaders have referred to as California’s “Blueprint for a Safer Economy,” which laid out a system of color-coded tiers of restrictions. As individual counties reached certain case thresholds, they were allowed to move through the tiers, a system introduced in August when the state was grappling with an alarming rise in new cases.

Mr. Newsom and other state leaders emphasized that the state needed to have the ability to quickly reimpose emergency measures if hospitals started to fill up.

[See scenes from the depths of Los Angeles’s surge.]

Around Thanksgiving, there were signs that public health officials’ worst fears would be realized. By December, hospitals — especially in hard-hit areas, like Los Angeles — were overwhelmed with patients, and the state ordered Californians to stay at home again.

Now, as the focus has turned to the state’s vaccine rollout, Californians have been frustrated with what they’ve seen as a confusing and chaotic effort.

[Track coronavirus cases, hospitalizations and the vaccine rollout across California.]

Experts have also criticized the process for allowing poorer and harder-hit communities to be bypassed, even while state officials have repeatedly said equity is a “North Star.”

Advocates have said that in California — where leaders are painfully aware of the divides between the state’s wealthiest, often whitest, communities and its poorest communities, often home to predominantly Latino essential workers — both speed and precision should be priorities in the distribution of vaccines.

“Equity and scale are possible for the wealthiest states in the nation,” Jacqueline Martinez Garcel, chief executive of the Latino Community Foundation, said recently.

State officials said on Tuesday that they were confident in the state’s ability to inoculate millions more Californians, including particularly vulnerable workers, in the next couple of months.

“We’ve been very thoughtful and measured with who’s eligible to be vaccinated,” Dr. Mark Ghaly, the state’s secretary of health and human services, said on Tuesday in a briefing with reporters.

How did you find your vaccine?

Help us understand the vaccine rollout in California by telling us about how you found your shot, or an appointment for a loved one.

Did you use the state’s My Turn system? Did your health care provider let you know you were eligible? Did you go to a clinic? Did you spend hours refreshing a county appointment site for a parent or grandparent? Did you wait at a mass vaccination site in hopes of scoring an unused dose?

Email us your story at CAtoday@nytimes.com. (And thank you in advance for sharing!)

Here’s what else to know today

With the end of California’s pandemic lockdowns at last in sight, we’ve been able to start to ponder how the past year has changed us.

My colleagues put together thoughts from readers on what may be different about our lives from before. Included are meditations on grief and depression, but also resilience, personal transformation and love.

And if you aren’t feeling much at all but fatigue, you’re certainly not alone. It may not fix the problem, but you might find some comfort in reading about how we have all hit a wall.

California Today goes live at 6:30 a.m. Pacific time weekdays. Tell us what you want to see: CAtoday@nytimes.com. Were you forwarded this email? Sign up for California Today here and read every edition online here.

Jill Cowan grew up in Orange County, graduated from U.C. Berkeley and has reported all over the state, including the Bay Area, Bakersfield and Los Angeles — but she always wants to see more. Follow along here or on Twitter.

California Today is edited by Julie Bloom, who grew up in Los Angeles and graduated from U.C. Berkeley.