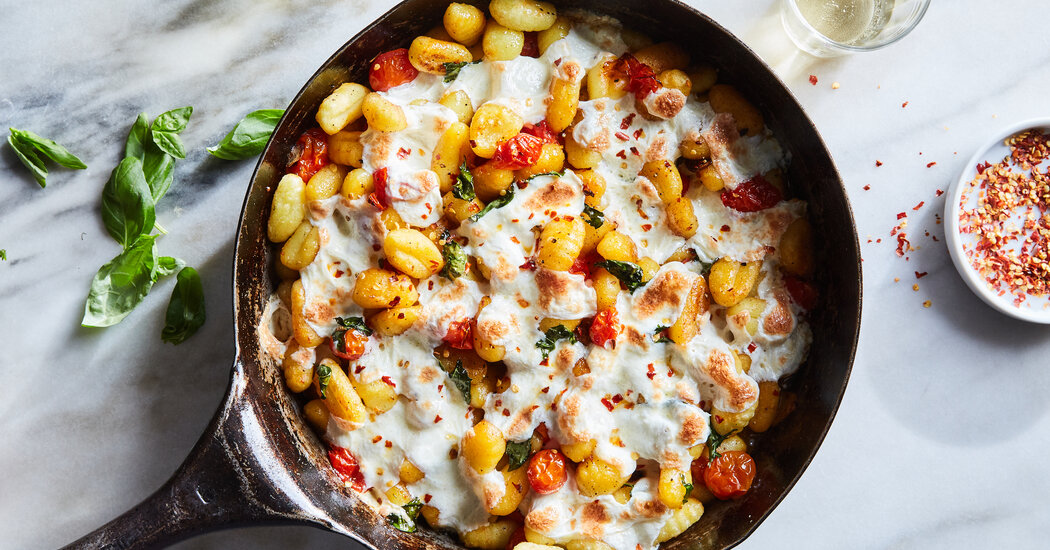 On Monday, I finally decided to try a trick that has appeared on New York Times Cooking a few times in the past year or two: searing or roasting store-bought gnocchi, rather than boiling it. Ali Slagle even wrote a whole story about this approach, which works with both shelf-stable or refrigerated gnocchi.

I will admit to initially having a block when it came to this idea. It seemed like each little gnocchi would be irredeemably dry and unpleasantly chewy. This turned out to be totally wrong. They were chewy, yes, but almost fudgy in texture, and above all difficult to stop eating. One of Ali’s genius gnocchi recipes is below, along with four other recipes, each with its own superb idea.

[Sign up here to receive the Five Weeknight Dishes newsletter in your inbox every Friday.]

On another note, Ramadan is about to begin, and we have a number of joyous recipes for iftar here. Write to me anytime: I’m dearemily@nytimes.com, and I love to hear from you.

You could toss any relatively short pasta shape with this bright burst tomato sauce, and it would be delicious. But Ali Slagle’s decision to use store-bought gnocchi is inspired, and I recommend you try it. The mozzarella is not necessary, but it is really good.

Kay Chun is full of brilliant ideas, like using oyster sauce as a base for barbecue sauce, which she brushes on salmon. The fish goes on a sheet pan with broccoli, scallions and ginger, then into the oven for an excellent meal with rice.

The other night I realized I had the makings of a Dinner Salad kicking around: leftover boiled potatoes and eggs, asparagus, anchovies, smoked salmon and avocado. This never happens, and it was great. I offer this Alison Roman recipe in that spirit, a take on crab Louie that combines fresh shrimp, green beans, eggs and avocado for a delightful spring supper.