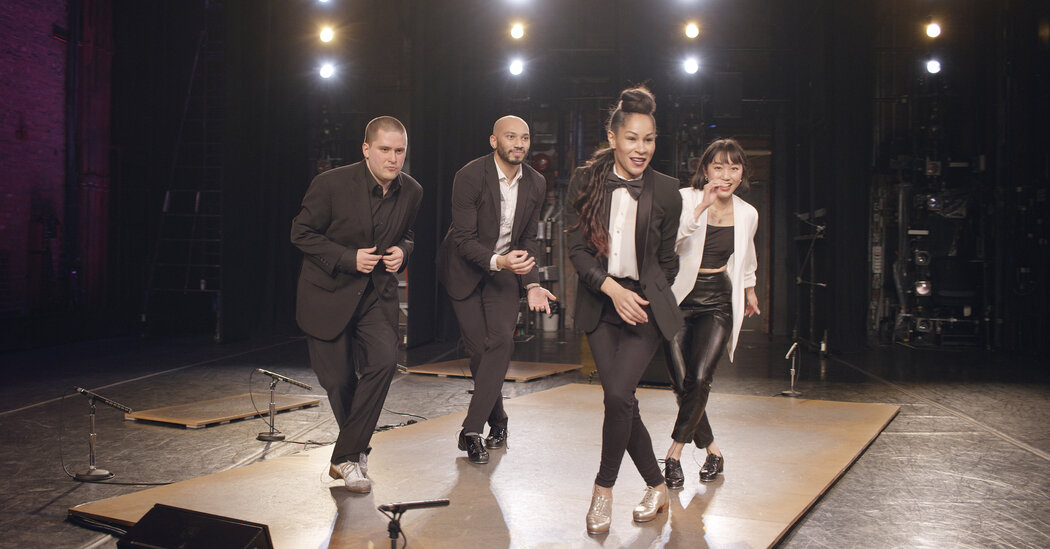 Generosity is an overlooked virtue in a dancer, but shouldn’t it be just as valuable as raw talent? It energizes a stage when a performer dances, not just for those in the audience but for those sharing it, too. I’ve always known that Ayodele Casel, a tap dancer and choreographer of extraordinary depth, was that kind of artist, but it took a pandemic to drive it home. Who can make the stage come to life like Casel? And who can make a virtual work feel just as alive as if you were there in person? She’s astonishing.

“Ayodele Casel: Chasing Magic” is a celebratory display of artistic encounters: How, after a lost year, they remain right where you left them.

Polished in look and spontaneous in feel, this virtual production, presented by the Joyce Theater, focuses on Casel as she surrounds herself with a rich assortment of collaborators, including the modern choreographer Ronald K. Brown, the jazz musician Arturo O’Farrill and the percussionist Senfu Stoney. It’s a journey — of music and of dance — in which Casel brings musicality and nimble feet to each stop along the way.

Directed by Torya Beard, who keeps the show moving beautifully while also sensing the right places to slow down and take a pause, “Chasing Magic” was filmed at the Joyce by Kurt Csolak, a tap dancer and filmmaker. There’s none of the mournful sentimentality that has colored other virtual presentations here and elsewhere; the theater has never looked so fresh, so full of promise.

The program unfolds in chapters, starting with “Gratitude.” Here, Casel unveils a premiere, “Ain’t Nothin’ Like It,” with Annastasia Victory on piano. At first we see Casel’s upper body and hear only gentle taps and brushes on the wood board; but soon the camera pans to show her full body — small yet strong, sharp yet fluid.

Casel is more than a container of sounds, as articulate as her emphatic feet are; as the music gains more dynamism and sweep, she uses her entire self — a self full of vibrations — to soften and deepen in pitch and tone.

As we enter into the landscapes of “Friendship” and “Joy,” there are older works, including two collaborations with the tap dancer Anthony Morigerato set to recordings of “Fly Me to the Moon” and “Cheek to Cheek.” Watching the dancers together is to see two highly sensitive instruments at play. Morigerato, with burly grace, lightly springs above the floor in footwork that braids and unbraids his feet; in “Fly Me,” he culminates a solo with a devilish spin. Throughout Casel fixates on his feet in delight. She can’t stop smiling, but then again, she never stops smiling. That’s just how she is. And it’s contagious.

Two more dancers, Naomi Funaki and John Manzari, join Casel and Morigerato in an effervescent quartet set to O’Farrill’s arrangement of “Caravan”: It’s like watching the most incredible band — tight enough to play loose. But the connection between O’Farrill’s music and Casel’s dancing, as witnessed in her 2019 Joyce debut, is next level. In “Chasing Magic,” they pair up again, first for a brief conversation, in which they talk about what it’s like when they perform together.

“When I think of magical moments,” Casel tells him, “it’s like that complete faith and trust that whatever is going to be will be.”

In “The Sandbox,” with O’Farrill on piano and Casel dancing before him, the balance between groove and lightness becomes almost feverish as the pace of both quickens and Casel’s dancing takes on a blistering intensity. All the while, the camera moves around them, showing different angles and perspectives of the theater itself — revealing it and revering it as a container of magic, too.

As the program progresses, Casel opens the stage to more guests, including Brown, a choreographer known for his poetic melding of contemporary dance movement rooted in African traditions, including West African and Afro-Cuban dance. In “Meeting Place: Draft 1,” Brown, in head-to-toe white including his sneakers, and Casel — later joined by Funaki and Manzari — seem to absorb and energize parts of each other as they dance, his body swaying and billowing like waves of silk. It’s ancestry and rhythm, the past and the present coming together in what one hopes will be the beginning of a larger collaboration.

In “The Magic,” the singer-songwriter Crystal Monee Hall belts out the title song, while the camera flashes on all of the performers, and finally the dancers, including Amanda Castro, spread across the stage for a rousing, joyful finale that peppers the floor with taps in brisk unison.

When it’s all over, you don’t know quite what’s happened: Casel’s brand of theater, even from afar, feels real. She leaves a parting note paying homage “to all the artists who have been dancing in basements, corners of a room, garages, on rooftops, 2 x 4, and 4 x 4 pieces of wood. We are superheroes. Pa’lante! Tap is magic.”

And so is Casel. Did you know that her image will be on a postage stamp this summer? Get to know her. She doesn’t need to chase magic. It chases her.