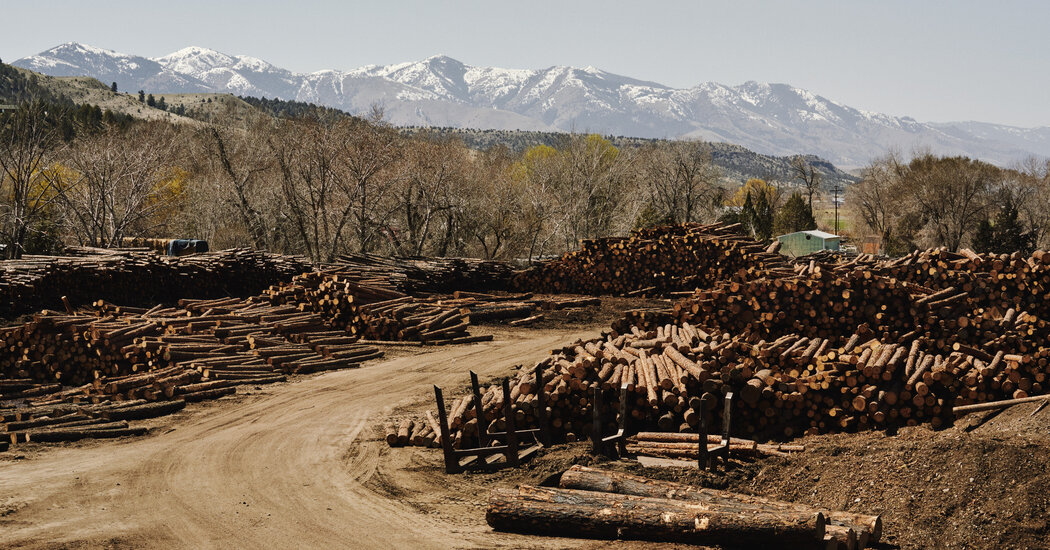 JOHN DAY, Ore. — One of the most venomous battles in our polarized nation is the one that has unfolded between loggers and environmentalists in timber towns like this one in the snow-capped Blue Mountains of Eastern Oregon.

Yet, astonishingly, peace has broken out here. Loggers and tree-huggers who once loathed and feared each other have learned to hold their noses and cooperate — and this may have saved the town. It may also offer lessons for a divided country.

The timber industry, by far the biggest employer in John Day, survives here only because environmentalists led by Susan Jane Brown, a Portland lawyer, fought to save these workers’ jobs by keeping chain saws active. John Shelk, who owns the town’s sawmill, and might be expected to eat environmental lawyers for breakfast, says simply, “Susan Jane is my hero.”

This collaboration between environmentalists and loggers is often grumpy, incomplete and precarious, but it’s also inspiring. It offers America a model of a process to sit down with antagonists, seek common ground, register progress (punctuated with eye rolls and moans) and knit this country back together.

The timber peace process began in 2003 at a bitter meeting over forest policy. Loggers were furious at Brown for having halted logging in local national forests by suing to protect species like woodpeckers and redband trout and by tying the U.S. Forest Service in procedural knots — but they were also desperate to save their livelihoods. A delegation of burly woodsmen approached Brown, who is 5-foot-2, and invited her to go out into the forest with them.

“My life flashed before my eyes,” Brown told me. But she took a deep breath, overcame her fears and eventually spent three days with the loggers (she brought a very large friend as a bodyguard), visiting forests and arguing about whether trees should be cut.

“It was very tense,” she remembered. But while the two sides didn’t agree, each was surprised to find the other not entirely diabolical.

“We thought, ‘Well, we haven’t killed each other, so maybe we should keep talking and let’s see what happens,’” she said. In 2006 they formalized the dialogue by naming it Blue Mountains Forest Partners.

The word “partners,” though, was mostly aspirational. The timber industry was collapsing, with a 90 percent plunge in the harvest from national forests in Oregon between the 1980s and the 2000s. Workers were losing well-paying jobs and in some places the human toll was catastrophic. I wrote recently about an Oregon friend of mine, Mike Stepp, whose life disintegrated into homelessness and early death when he couldn’t follow his dad into a good sawmill or factory job. Brown says that back when she started to talk with the loggers she didn’t really think of the human cost.

John Day reciprocated the hostility. The area was already deeply conservative — it had voted overwhelmingly to withdraw from the United Nations — and the closure of two of its three sawmills left people fearful and furious.

Then, with almost no new logs coming in, Shelk announced that he would have to close the last sawmill, just as he had already closed his two other sawmills in Eastern Oregon. The entire town was teetering.

Yet this was also a crisis for environmentalists. In their meetings with the foresters, Brown and her colleagues had gradually been persuaded that some logging was necessary to make the forests healthy again.

That’s because nearby forests were dangerously overgrown. For thousands of years, fires had burned the forests every decade or so, clearing out the underbrush but not harming large trees. Decades of fire suppression had ended that natural balance, leaving the forests full of tinder just when climate change was also making them drier and hotter.

“This is not natural,” Pam Hardy, who works with Brown at the Western Environmental Law Center, told me as we walked through a national forest full of saplings and brush west of John Day. If a fire broke out in a place like this, she explained, there was so much fuel that the fire would burn hot and incinerate everything — destroying forests, rather than keeping them healthy.

The best hope to revive the forests, Hardy and Brown concluded, was to hire loggers to clear out small trees — and that meant there had to be a sawmill to take the logs. “I need the mill,” Brown explained.

So the environmentalists and loggers joined forces. With the help of Senator Ron Wyden, an Oregon Democrat, they won a 10-year stewardship contract to subsidize forest thinning and restoration of the traditional landscape, and this saved the mill and kept the town alive.

“Without her, we wouldn’t be,” said Mark Webb, a county commissioner. “It’s as simple as that.”

Yet this kind of cooperation is brutally difficult. Small logs are less profitable for the sawmill than large ones, and many people on all sides see those participating in the dialogue as sellouts.

Webb, who has a Ph.D in philosophy but was drawn to rural spaces, joined the forestry collaborative, as the process is called, but instead of being rewarded for saving the mill, he was defeated in his re-election bid. Hardy was nudged out of another environmental organization for her openness to logging to reduce fire danger. And Shelk, the owner of the mill and an active member of the collaborative, says, “I’m kind of an outcast in the timber industry.”

There are other forest collaboratives around Oregon that are also trying to sustain dialogue between loggers and environmentalists, with varying degrees of success and frustration. In John Day, the group is tussling over how much salvage logging to allow after forest fires, and how many roads should be allowed in the national forests. But members are making progress, and Brown has built a weekend home in John Day.

What advice do they offer for bridging hostilities and creating a peace process? A starting point is finding people from each side who are equipped with humility and empathy. Then when disputes arise, both sides need to agree to defer to science — and if the science doesn’t exist, then to conduct experiments to gather evidence. They say it doesn’t hurt if after meetings everyone relaxes over dinner together.

I normally cover people who are exchanging insults, occasionally gunfire. So there’s something exhilarating about being in Brown’s home in John Day, with loggers and environmental lawyers arguing amiably around a dinner table, antagonists who have also become friends.

They roll their eyes in fond exasperation at things the others say, and across town, because of them, the sawmill is still spitting out boards and keeping John Day humming. Maybe there’s something the rest of the country can learn from this handful of sellouts who saved a town.