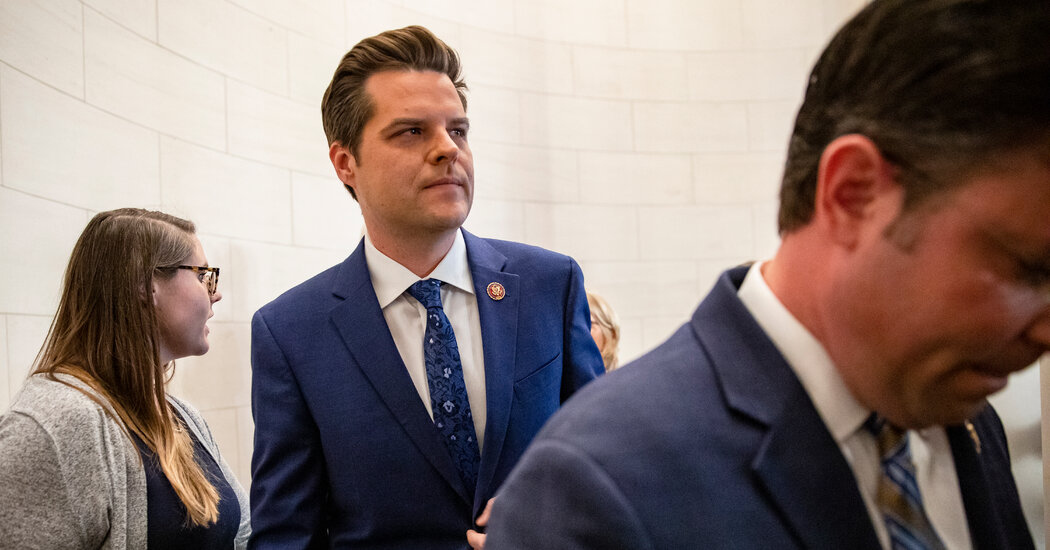 Gail Collins: Bret, it’s a little embarrassing that one of my opinion-writing specialties is sex scandals. When I started off back in the day, I sort of imagined it’d be … state and local government. A more elevated subject, anyway.

Bret Stephens: Something tells me that the ennui of state government lends itself quite easily to sex scandals. Like pandemic lockdowns to day drinking or lengthy religious services to … impure thoughts.

Gail: My contribution today is that a man named John Merrill, the Alabama secretary of state, who was angling for a Senate run in 2022, recently made the mistake of going on talk radio to deny a story alleging that he had an affair. The problem, he said, was a legal assistant who was stalking him.

Bret: This cannot have ended well.

Gail: You can guess the rest. And the helpful moral to the story is never to speak deprecatingly about a rumored lover when said lover has a recording of a very steamy 17-minute phone call.

Gail: So much for the secretary of state. But what if he’d been, say, a governor? Or senator.

Gail: Ah, memories. But in America, my theory is that voters balance this kind of bad behavior with other factors, from the importance of the sinner’s job to whether they agree with his politics.

If a little-known state official or a low-achieving congressman like Matt Gaetz gets caught up in a scandal, it’s easy enough to toss him out of office. But what about … Joe Biden?

Bret: Well, Tara Reade’s allegations against Joe Biden never got far. Partly, I think, it’s because he had already sewn up the nomination by the time she came forward. But partly it was also because there was a dearth of corroboration to her charges and because she backed out at the last minute from an interview with Chris Wallace.

Gail: And then the country moved on.

Bret: With Gaetz, by contrast, all the allegations against him seem entirely in character. Same with Eliot Spitzer or Andrew Cuomo: When the claims against both New York governors emerged, you kinda thought, “It figures.”

Gail: Yeah, and in some cases — I’m thinking of the very early sex scandals with Rudy Giuliani — people yawn and say “Everybody already knew that.”

Bret: I do think there’s an ideological, if not exactly partisan, element. With the distinguished exception of The Wall Street Journal’s Dorothy Rabinowitz, the press showed almost zero interest in Juanita Broaddrick’s rape charges against Bill Clinton, at least until he was long out of office. Ted Kennedy is still remembered worshipfully by liberals as the “Lion of the Senate,” even though he was almost certainly guilty of what most of us would consider an appalling sexual assault in the company of Chris Dodd, his Democratic Senate pal, who also retired honorably. Cuomo, obviously, is a Democrat, but he also has a lot of enemies on his left.

By contrast, Bob Packwood, the Oregon Republican, got thrown out, deservedly, on his ear. And then of course there’s Brett Kavanaugh.

Gail: Now a member of the Supreme Court. Which is not exactly a terrible punishment.

Bret: Haunted by an accusation that was never corroborated by other witnesses but will almost surely be in the first paragraph of his obituary.

Speaking of the court, what do you think of Biden’s plan to examine expanding it, and maybe term-limiting judgeships?

Gail: Two thoughts about court packing: One is that it’s a righteous response to the behavior of the Republicans during the Obama administration. Mitch McConnell ignored judicial nominations the president sent him. Just let them stack up in a closet somewhere. Until Donald Trump entered the White House.

As a result, the judiciary is top-heavy with conservative judges, many of whom will be around a heck of a long time, a drag on any Democratic administration for ages. Total injustice.

Bret: You’re right that McConnell shamelessly abused his power, above all with Merrick Garland’s nomination. But court packing was a bad idea in F.D.R.’s time, and it’s a bad idea today. Sorry, go on.

Gail: Second thought is that it’ll never happen — we can barely get this Senate to agree the sun rises in the east.

Bret: The east is a social construct.

Gail: On the second question, term-limiting judges seems like a very sensible idea to me. If you’d like to start a movement, I’m game.

Bret: On the contrary, I’ve always thought the idea of life tenure for judges was a pretty good way of protecting the independence of the judiciary. We’re living in a world where the idea of retiring at 65 makes less and less sense, at least for people who can continue to do great professional work well into their 70s and 80s. It would be pretty rich if the Senate — where, at least as of the last Congress, the average age hovers around 63 — were to agree with the president, who is the oldest in our history, to impose either term limits or an age cap.

All of which is to say: Rock on, Justice Breyer.

Gail: Good grief, of course these guys can’t impose age caps. No reason you can’t appoint a justice to a 20-year term at 55 or 60.

Bret: I foresee future presidents appointing 30-year-old judges to get around that kind of cap. The baby judges will then wind up appointing retired justices as their law clerks, just so they can understand the law.

Gail: Want to ponder that vision. Meanwhile, let’s talk about Biden. Last week was gun safety week, and the only disturbing part of his plan to cut gun violence was realizing how little he can really do with a Senate that will never pass any sensible legislation.

Bret: I definitely won’t be holding my breath. One of my kids asked me the other day to explain the phrase “Only Nixon can go to China.” Maybe I should have said that it meant, “Only a Republican president is going to be able to achieve meaningful gun control.” Whenever that happens. The issue is so polarizing that I think it’s going to take generational change before a critical mass of conservative-leaning voters realize that what we have now is nuts.

Gail: Always remember the Trump rallies where he’d rail against abortion — and the threat to “your Second Amendment rights”? Very weird the way they merge those thoughts.

Bret: Oh, right: The principle that life must be held sacred and inviolable until it can be shot to death.

Gail, something completely different: Besides Prince Philip, the other notable death last week was of former attorney general turned all-purpose radical Ramsey Clark. Any thoughts on his legacy?

Gail: Hope he’s remembered as a stalwart defender of civil rights who campaigned for the cause when it wasn’t popular. I suspect you’ve got some different thoughts?

Bret: I used to despise him. He made a career of defending not the wrongly accused, but the rightly accused. That included some of the worst human-rights abusers of all time, notably Saddam Hussein of Iraq, Slobodan Milosevic of Serbia, Muammar Qaddafi of Libya and various other rogues. To all outward appearances, his standard seemed to be, if you were an enemy of America, you were a friend of his.

But then I found myself reading his obituary in The Times, and felt a kind of grudging admiration. His views were the opposite of mine, but he never hesitated to express, and act, on them. He wasn’t at all cowed by the fact that he was widely reviled. And he didn’t seem to feel encumbered by his position as a former senior U.S. official and son of a Supreme Court justice. In this age in which people are terrified of expressing a “bad opinion” or of being canceled by the people who hold “correct” views, there’s something to be said for that.

Gail: True, and one could say the same thing for anyone who agrees to become a conservative columnist for The Times. Without whom this part of my life would be much duller.