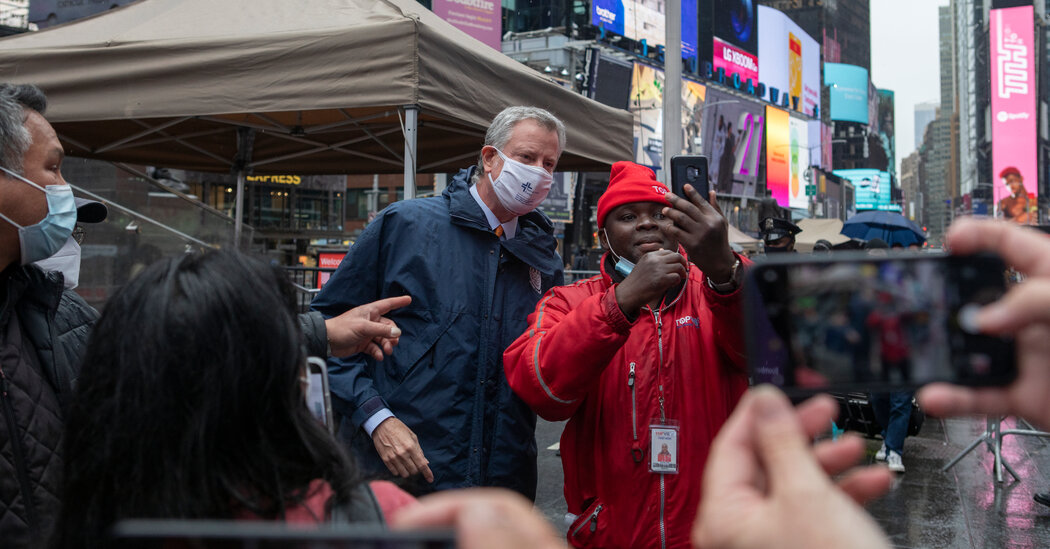 He braved the 85-foot plunge on the Cyclone roller coaster to celebrate the reopening of Coney Island. He stood with the actor Lin-Manuel Miranda in the middle of Times Square to announce that Broadway was coming back. He savored a Krispy Kreme doughnut — free for people who get vaccinated — on camera as if it were a fresh croissant from Paris, or at least his favored patisserie in Brooklyn.

It only took seven years and change, but it appears that Bill de Blasio is finally having fun as mayor.

His spirits have been buoyed by a confluence of events: a feeling of hope as millions of New Yorkers get vaccinated after a devastating year; an influx of federal funding to shore up the city’s finances.

But the biggest factor may well be the diminution of influence and interference from the mayor’s longtime nemesis, Gov. Andrew M. Cuomo, who has largely been sidelined by a series of scandals.

“This is New York City coming back before your very eyes,” Mr. de Blasio said in Times Square this week after bopping his head to a performance of “New York, New York” and touring a new vaccination site for Broadway workers with Mr. Miranda.

During his two terms as mayor, Mr. de Blasio has often appeared dour at public events, as though the job was more of a responsibility than a joy, and he has been indignant at times over harsh media coverage, especially after his failed presidential bid two years ago.

He is still not particularly popular: His approval rating in the city was only 38 percent in January, and the Democratic candidates running to succeed him in the June 22 primary are almost uniformly critical of him.

That was before “The Spring of Bill,” as the mayor’s press secretary, Bill Neidhardt, is calling it — a reference to a “Seinfeld” episode, “The Summer of George,” in which the character played by Jason Alexander receives a windfall and decides to live life to the fullest.

But it is less of a windfall, and more of a downfall — of Mr. Cuomo’s political fortunes — that is driving Mr. de Blasio’s refreshed outlook.

“Now that Cuomo’s fully occupied with avoiding questions about multiple credible sexual assault allegations, he’s been interfering with the city less,” Mr. Neidhardt said, adding that there were “fewer strange ego trips,” like when Mr. Cuomo refused to welcome the hospital ship U.S.N.S. Comfort alongside Mr. de Blasio and did it on his own.

The mayor’s contentious relationship with the governor reached a turning point in 2015, when Mr. de Blasio publicly raised concerns about Mr. Cuomo’s bullying style. The feud worsened, with the governor embracing any opportunity to upstage the mayor.

But now facing multiple investigations into allegations of sexual harassment and his administration’s handling of virus-related nursing home deaths, Mr. Cuomo has given the mayor an opportunity to reassert himself.

Mr. Cuomo’s daily televised virus briefings are no more; he now holds the briefings intermittently, and sometimes only by phone. But Mr. de Blasio has continued his own daily briefings, and has seemed more at ease with the attention.

He has also shown a renewed eagerness to publicly criticize or question the governor’s behavior, saying that reports of the governor’s bullying tactics were “classic Andrew Cuomo.”

“He doesn’t say, how do we work together to solve the issues of homelessness?” the mayor said last month of the governor. “That’s never the conversation. It’s always something about what he needs.”

The city still faces enormous challenges as it recovers from the pandemic, but the mayor has received praise for reopening public schools safely before other big cities, and says that the city is on target to reach his goal of vaccinating five million New Yorkers by June.

Some New Yorkers are pleased to see Mr. de Blasio’s newfound enthusiasm for his job — however late it might be.

“It is utterly refreshing to see the mayor actually being a cheerleader for our city,” said Olivia Lapeyrolerie, a political strategist and former aide to Mr. de Blasio.

Even his critics have noticed a change in the mayor’s demeanor.

Joseph Borelli, a Republican city councilman from Staten Island, said when he visited City Hall in recent months, he always saw the mayor “pacing like a madman” in front of the building on the phone.

Mr. de Blasio has been known to shun some of the rituals of the job that his predecessors embraced with varying degrees of humor and equanimity.

He has not appeared at an introductory event for a Fourth of July hot dog eating contest in several years. He has not made frequent visits to the city’s cultural institutions like past mayors. And, of course, he has not gone to the Staten Island Zoo for Groundhog Day since 2015, a year after the zoo’s groundhog died after the mayor dropped it.

The mayor has also received criticism for arriving late to events, and for his adherence to his gym routine in Brooklyn, far from the mayoral residence in Manhattan, Gracie Mansion.

A Red Sox fan who grew up in the Boston area, Mr. de Blasio did not fit in as a sports fan in New York, either. But in a sign of his commitment to the city’s comeback, Mr. de Blasio wore a Yankees hat in February as he visited a new vaccination site at Yankee Stadium.

“For one day only, I will declare myself a Yankees fan,” he said.

“Bill de Blasio riding the Cyclone doesn’t just say Coney Island is back — it says to people who are thinking about where to build a business that New York deserves a look,” he said.

In an interview in Times Square, Mr. de Blasio said that the city’s current situation reminded him of the World War II era, and he recalled how his mother, Maria de Blasio, who worked as an editor at the Office of War Information in New York during the war, described the camaraderie she felt during that time.

“I feel like this is our moment, our generation’s moment, where everyone has got a very deep desire to work together, find some common ground and get something done and bring the city back,” Mr. de Blasio said. “That’s inspiring. That’s energizing.”

The mayor’s office said that Mr. de Blasio was also engaged behind the scenes. Since February, he has held a “recovery war room” meeting every Friday afternoon that can last more than two hours. More than 20 staffers discuss each facet of the city’s recovery effort.

And there are other problems to confront. Mr. Borelli, even while complimenting the mayor, called on him to bring on “more policing” to address a rise in violent crime — an issue that Fox News has seized on, suggesting that it was inappropriate for Mr. de Blasio to be having fun while the city was still in crisis.

Last year was the city’s bloodiest in nearly a decade with more than 460 homicides. There have been 92 murders this year — a 19 percent increase from the same period last year. At the same time, violence on the subway and a brutal attack on a Filipino-American woman, among other assaults, have raised concerns about safety and the rise in reported anti-Asian hate crimes.

Mr. de Blasio responded to Fox News — his favorite right-wing foil now that President Donald J. Trump is no longer in office — by arguing that the city would overcome its problems.

“I want to say to everyone at Fox News, I’m not going to apologize for celebrating New York City,” he said.