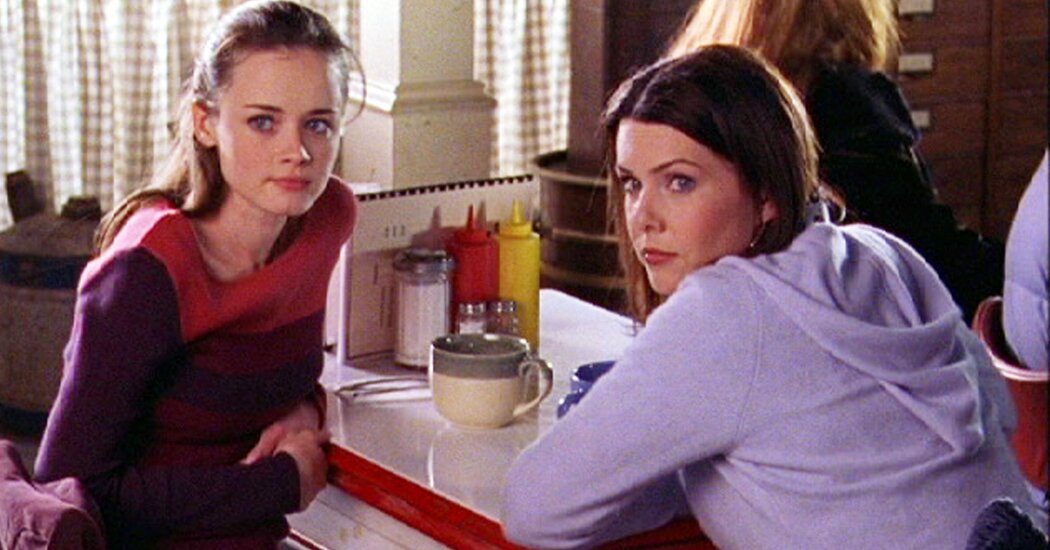 The central tension of the show is Lorelai’s continuing frustration with her cartoonishly wealthy, cocktail-swilling parents, who are endlessly disappointed in her, despite what looks like really quite decent success — including a large home with a great porch, work she enjoys, enough disposable income to eat out for every meal and a town full of people who care enormously about her family. (The supporting cast includes an effervescent Melissa McCarthy and cameos from Carole King, whose “Where You Lead” is the show’s sing-along-with-me theme song.)

The depth of community alone seemed otherworldly to us, marooned as we were, away from extended family, synagogue and most friends. We are coolly cognizant of our immediate neighbors — wave-hello friendly — but no one knows whether Orli is at home or at the hospital. And in truth, most of the time I’m not unhappy to be able to avoid the scrutiny of small-town life.

The story lines work because of the fierceness with which the two main characters love each other. The Seinfeldeian relative nothingness of their days feels like what life might have been like if no one was sick and everything, more or less, always worked out. Ms. Sherman-Palladino’s famously smart-alecky, double-time, vocabulary-rich dialogue kept the sweet Gilmore girls plenty tart.

The show is predicated on the idea that the past haunts the Gilmores (Lorelai’s teenage pregnancy) and the future rests on Rory. But the present is, blissfully, a given — there is work, there is school, there are loves, there are breakups — no one worries much that the next day won’t dawn as crisp and bright and caffeinated as the last.

There was a reassurance in that for us. We don’t dwell on the past because its very normalcy complicates our very abnormal current life. We cannot plan even a few weeks into the future, as we await news of Orli’s next treatment plans. We are “being present,” as so many yoga classes have urged me to do, because there is no other place to rest.

So we stayed with the Gilmores, the girls layered on each side of me on the couch, securely tucked in like weighted blankets, until the show threatened to lose us. In Season 6, the writers’ room divided Rory and Lorelai for several episodes; mother and daughter had stopped speaking over Rory’s decision to temporarily drop out of Yale. It bothered us how terribly out of character this was for both blue-ribbon Rory, who had always been too driven to be so rash, and Lorelai, because it seemed impossible that she could be happy without her girl. Their rift broke the spell.

Meanwhile, at the hospital, during a weekend in the I.C.U. and then, a few weeks later, after a surgery to remove a malignant lung lesion, Orli and I binged on “Ginny and Georgia,” a different, darker, once-upon-a teenage-mom story with less-white cast and a queer secondary story line. At home, Hana and I watched a series about a girl and a horse. The four of us, Ian included, took refuge in the classics — “The Princess Bride,” “The Wizard of Oz.”