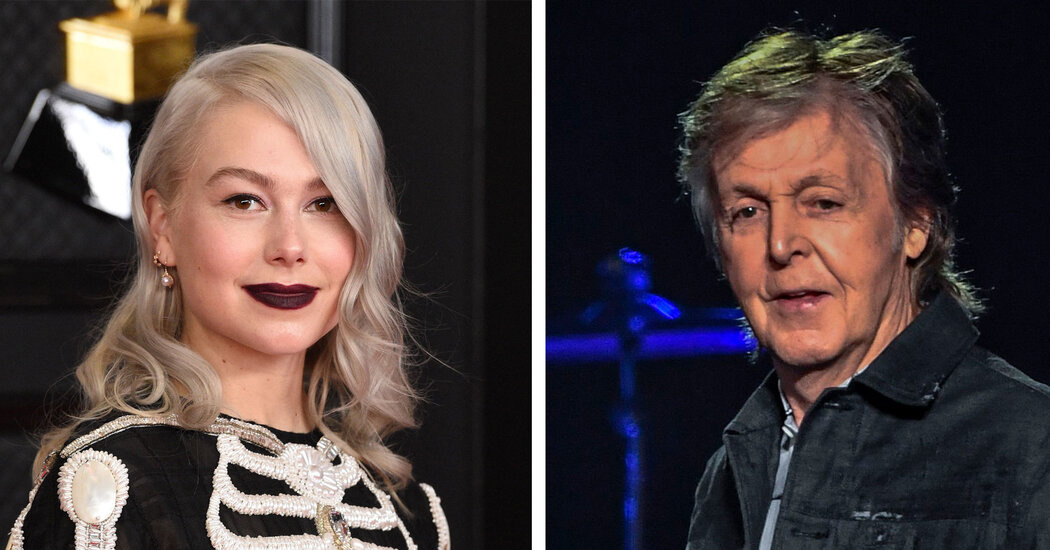 Don’t take Paul McCartney’s enduring gifts — natural melody, succinctly surprising lyrics, sly chord progressions, tidy arrangements — for granted. Other songwriters don’t. Lest anyone has, the 78-year-old Sir Paul enlisted younger admirers (Beck, St. Vincent, Blood Orange, Anderson .Paak, Josh Homme, Dominic Fike) to rework the songs from his 2020 solo-in-the-studio album, “McCartney III,” as the new “McCartney III Imagined.” Phoebe Bridgers took on “Seize the Day,” a manifesto of unironic good intentions: “I’m OK with a sunny day when the world deserves to be bright.” She brings her own spirit of hushed discovery to the song, keeping McCartney’s march tempo but toning down his electric guitars. She ends her version with church bells, like a blessing. JON PARELES

Since joining forces as boygenius, two-thirds of the band, Phoebe Bridgers and Julien Baker, have released searing solo albums that took their already strong songwriting to the next level. Now, it appears to be Lucy Dacus’s turn. “Hot & Heavy” begins in a synthesized glow, for a moment seeming like it might be a continuation of the stark sound she conjured on the recently released “Thumbs.” But it doesn’t take long for “Hot & Heavy” to kick into a gallop, coming alive with chiming guitars and gleaming pop-rock flourishes that recall “Full Moon Fever”-era Tom Petty. “You used to be so sweet,” Dacus sings on this tale of stinging nostalgia, “Now you’re a firecracker on a crowded street.” LINDSAY ZOLADZ

Ten years ago, Sharon Van Etten released her first great album, “Epic,” an enduringly wrenching account of a troubled relationship’s dissolution. To commemorate its anniversary, an impressive and eclectic array of artists — Lucinda Williams, Courtney Barnett, Shamir — contributed to a covers collection called “Epic Ten.” The ultimate co-sign, though, comes from the indomitable Fiona Apple, who offers her own interpretation of the album’s beautiful closing track, “Love More.” Van Etten’s version was a sparsely poignant dirge, buoyed by gentle waves of harmonium chords. Apple, instead, anchors hers to an almost chant-like rhythm accompanied by playfully layered backing vocal runs — though her delivery of the song’s verses provides the smoldering intensity these lyrics call for. “Chained to the wall of our room,” goes the opening line. Leave it to Fiona to fetch the bolt cutters. ZOLADZ

“We can feel these vibes until my phone dies,” Andra Day offers, casually pitting the promise of romance against limited battery life. In Anderson .Paak’s blithe, tricky production, a frisky Brazilian beat carries Day’s multitracked vocals through a maze of chromatic chords that gives the illusion of climbing higher and higher, all the way to a sudden, giggly end. PARELES

It’s been three years since the London artist and Mica Levi collaborator Tirzah released her hypnotic debut album “Devotion,” but the new single “Send Me” transports the listener right back to that singularly chill head space. “Send Me” is built from simple materials — a repeated guitar lick, a hi-hat loop and Tirzah’s sultry, Sade-like vocals — but combined they somehow create a dense, enveloping atmosphere. “Let me heal and now I’m sure, now I’m sure,” Tirzah sings, her words seeming to turn to vapor on the exhales. It’s a whole vibe. ZOLADZ

Saweetie and Drakeo the Ruler, ‘Risky’

It’s only April, but Saweetie is already wishing you a very pretty summer. Her new single “Risky” is at once effortless and exuberant, patiently waiting for whenever the weather permits you to roll the windows down. Drakeo the Ruler’s murmuring flow provides a perfect counterpoint to Saweetie’s bombast (“All this ice drippin’ on my body like a runny nose”), while a minimalist beat provides plenty of space for her personality to shine like a freshly painted ride. ZOLADZ

For Mick Jagger, quarantine fatigue has curdled into sarcastic exasperation. “Eazy Sleazy” is a late-pandemic rant, a stomping, mocking checklist of sloppy rhymes and coronavirus-year phenomena, from “Cancel all the tours/football’s fake applause” to “TikTok stupid dance” to “Way too much TV” to wacky conspiracy theories. Dave Grohl, an accomplished student of classic rock, reconstituted the full Rolling Stones sound behind Jagger’s rhythm guitar, and every few lines there’s a scream tossed into the mix. The chorus looks forward to a “freaky” reopening, when “It’ll only be a memory you’re trying to remember to forget”; this song will be a throwaway souvenir. PARELES

Hannah Reid, London Grammar’s singer, plays a not-so-impartial observer in “Lord It’s a Feeling.” She stacks up the misdeeds of a friend’s callous, cheating lover — “I saw the way you laughed behind her back” — before revealing, “I can admit that I have been right here myself.” A decorous string orchestra backs her at first, as she sings in her purest tones. But when her own stake becomes clear, a beat kicks in, her voice hardens and the observer becomes the accuser. PARELES

It’s a small world. José González, born in Sweden to Argentine parents, carries on a British tradition of folky, meditative singer-songwriters. “Visions,” built from vocal harmonies and acoustic-guitar picking, takes an eternal perspective on “sentient beings” who should “look at the magic of reality/while accepting the honesty that we can’t know for sure what’s next.” Accompanied by his guitar drone, distant electronics and bird song, he notes, as a kind of mantra, “We are here together.” PARELES

Lea Bertucci, ‘An Arc of the Horizon’

Place is central to the music of Lea Bertucci, a multi-instrumentalist and sound artist whose recordings often spring from questions about how physical environments express themselves through sound. But her work isn’t meant to just document the sonic qualities of a place; through a process of layering and abstraction, Bertucci gives us something closer to the residue of an experience or a vanished memory. On her new self-released album, “A Visible Length of Light,” ambient recordings she captured in New York, Rio de Janeiro, California and Nebraska haunt tracks featuring lightly droning organ, bass clarinet, wood flute and saxophone. It’s not clear where the sounds on “An Arc of the Horizon” were captured, but instead the music — spatial more than melodic — becomes an environment of its own. GIOVANNI RUSSONELLO

Rustle, resonance and attentive listening are the coins of the realm when the trumpeter Wadada Leo Smith, the multi-reedist Douglas R. Ewart and the drummer Mike Reed come together. They’ve performed as a trio only rarely, but all three are improvisers and organizers with roots on the Chicago avant-garde and histories of involvement in the Association for the Advancement of Creative Musicians. “Super Moon Rising” is the centerpiece of their new album, “Sun Beans of Shimmering Light,” which connects to a long tradition of recordings by AACM-affiliated musicians that treat sparse and spacious free improvising as a style unto itself. RUSSONELLO

“Rapid & Complete Recovery” passes, briefly, as one of the milder, more approachable songs in Spirit of the Beehive’s catalog of dense, overloaded, compulsively morphing and often nerve-racking songs. It’s from the Philadelphia band’s new album, “Entertainment, Death,” and with its jazz-tinged opening bass vamp and acoustic-guitar syncopations it could pass for Laurel Canyon pop-folk — if not for its nagging high synthesizer tones, its cranked-up drums, its swerve into spoken words and the way instruments and vocals echo and melt at the end. “No limitations, you know what I’m after,” Zack Schwartz and Rivka Ravede calmly sing, perhaps as a partial explanation. PARELES