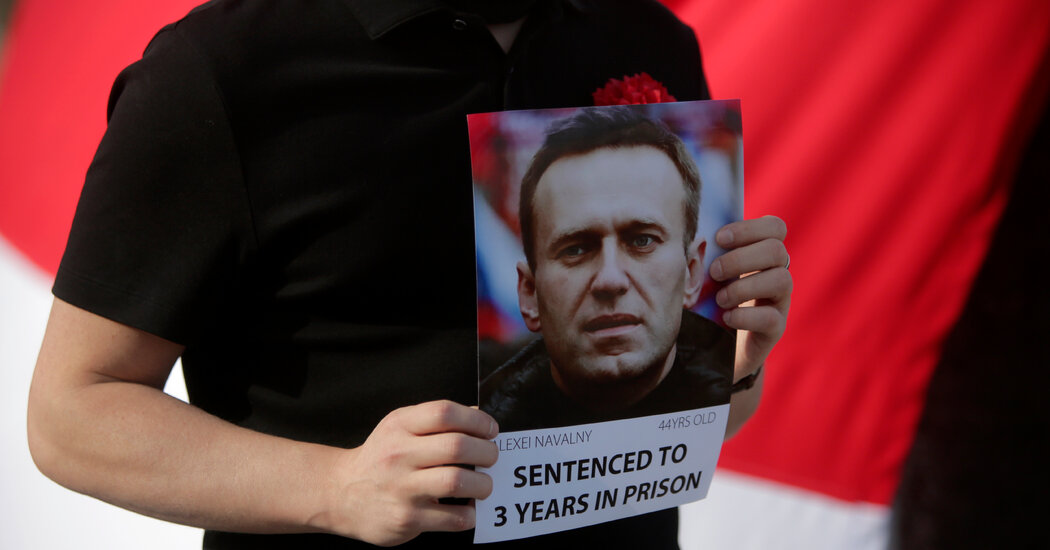 Aleksei Navalny’s wife, doctor and colleagues have sounded an anguished alarm that the incarcerated Kremlin critic’s health is rapidly deteriorating and his heart could stop any minute. They and many other supporters of Mr. Navalny are demanding that his doctors be immediately allowed to see and treat him.

The decision clearly rests with President Vladimir Putin of Russia, and he should promptly agree. It may well be that Mr. Putin would prefer to be rid of his most effective critic — Mr. Navalny’s current ordeal, it will be recalled, began when Kremlin goons tried to kill him with a military nerve agent, an attack he survived only narrowly.

But Mr. Putin should understand that letting Mr. Navalny now perish in a labor camp would solidly confirm Mr. Putin as a “killer,” a characterization President Biden recently said he shares, and as a vengeful despot willing to go to any lengths against his critics. Mr. Putin has been around long enough to know how that would play abroad, and among Russians already showing fatigue with his increasingly authoritarian and open-ended rule.

On Saturday, more than 70 prominent international writers, artists and academics — including Benedict Cumberbatch, Henry Louis Gates Jr., Orhan Pamuk, Vanessa Redgrave, J.K. Rowling, Salman Rushdie and Tom Stoppard — signed an open letter, published in British, French, German and Italian newspapers, calling on Mr. Putin to ensure that Mr. Navalny is “immediately given the medical treatment and care that he urgently requires — and is entitled to under Russia law.”

The only “crime” for which Mr. Navalny is being hounded is his courageous campaign to expose corruption and venality in the Kremlin elites, in part through hard-hitting and sardonic videos deriding the “crooks and thieves” at the top. The latest of these videos, detailing an extraordinarily lavish palace allegedly built for Mr. Putin on the Black Sea, was released shortly after Mr. Navalny was arrested in January.

The Kremlin has long tried to stifle Mr. Navalny, sometimes with brief stints in jail. Last August, however, the game radically changed when Mr. Navalny fell grievously ill on a flight over Siberia from what was later identified by Western experts as poisoning with the nerve agent Novichok. An independent investigation concluded that the attempt on Mr. Navalny’s life was the work of a group of Russian secret agents who had long been shadowing him.

After several months of treatment in Germany, Mr. Navalny courageously returned to Russia, knowing that this almost certainly would mean arrest. It did, and Mr. Navalny soon ended up in a notoriously harsh penal colony 60 miles east of Moscow, exposed to acute mental and physical torment.

Last month, Mr. Navalny reported that he was suffering from back pain and had lost feeling in his hands, and at the end of March he declared a hunger strike to demand proper treatment. Instead of a doctor, the Kremlin had the gall to send a television team led by Maria Butina, the same woman who was expelled from the United States for infiltrating political circles. According to Mr. Navalny’s Twitter account, she was “shouting that this is the best and most comfortable prison.”

Finally, on Saturday, Dr. Anastasia Vasilieva, Mr. Navalny’s physician, and three other doctors sent a letter to the head of the Russian prison service saying a blood test showed that Mr. Navalny’s potassium had reached “critical levels,” and they demanded immediate access. Mr. Navalny was also reported suffering from a severe cough and fever. “This means both impaired renal function and that serious heart rhythm problems can happen any minute,” the doctors wrote in the letter, which was posted on Dr. Vasilieva’s Twitter account.

The facts of Mr. Navalny’s condition cannot be verified independently. That, of course, is the point — any “official” report from prison authorities would have zero credibility, given the August attempt on his life. It is imperative that Dr. Vasilieva and her team of doctors be allowed to promptly examine Mr. Navalny and get him into intensive care if necessary. If Mr. Navalny dies, there is no question who should be held responsible, and the cost will be high.