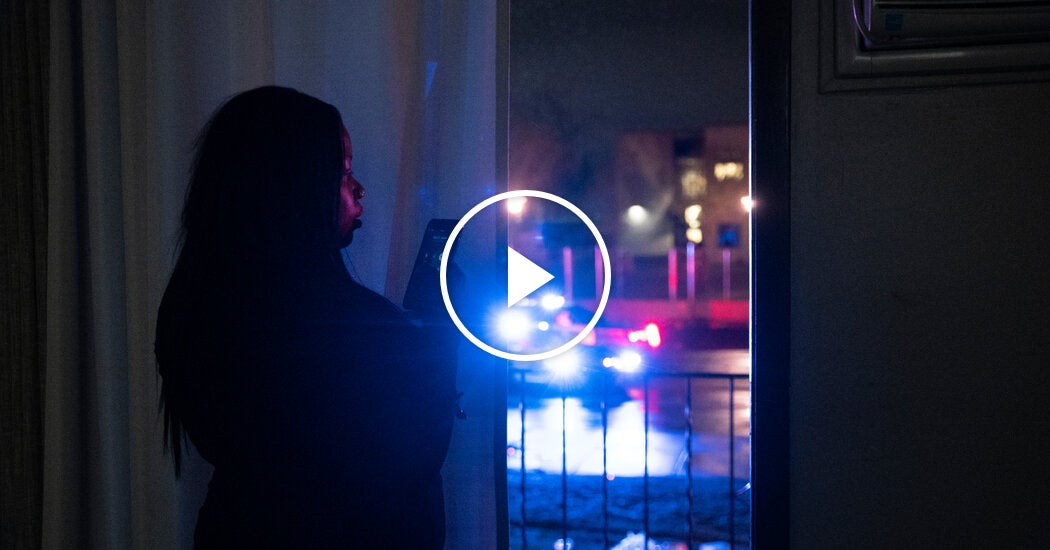 “It’s OK, it’s OK, you OK? Y’all are fine, he just want me. Go over there, go over there. I’ll bring you a snack, stay on the floor. On the floor — stay, OK? Mommy gonna bring you a snack, OK? Stay with sister. At first it was very traumatizing to hear all the booms and the bangs. You don’t know if that’s gunshots or people who are outside getting injured. OK, be careful. It’s chaotic, but you are sitting in the middle of the chaos and you’re just numb. It’s becoming a normal thing, which is not a good thing.” “Say his name!” “Daunte Wright!” “What’s his name?“ “Daunte Wright!” Singing: “Black lives, they matter here.” “All power to the people!” [cheering] “So when everybody was right here, they had to get separated” “They started pushing everybody back down that way and they started shooting stuff. And they would loop around here, and wouldn’t let nobody in from the other side.” “But they didn’t hit you, right?” “They didn’t hit the building, but they was shooting by the building.” “They had to be careful —” “They shouldn’t be doing it, period. They should be taking a knee with us. They should be standing with us.” Singing: “I believe that we will win.” “My brother is only two right now. I don’t want to ever see my brother on the news as one of these Black men getting murdered by them.” Singing: “We have nothing to lose.” “The police are pretty much calm during the day. The crowd is calm as well. But when it turns, like I want to say, maybe 7 or 8 o’clock, it gets a little aggressive.” “You are demonstrating at unlawful assembly.” “How is it unlawful? It’s not unlawful, you’re unlawful. There won’t be no peace till we get our justice. It’ll be years. Sad to say. I don’t know what was going through the mind of the woman that pulled the trigger. But I do also sympathize with her in the sense that if she is a middle-aged white woman in a field that’s mainly men, she’s probably under stress every day and everyone is on edge right now. So when you freak out, you don’t think and you do make mistakes.” “The fact that she can dance and listen to music and twirl around is amazing to me when all this stuff is going on out there. I wish my mind was not where it is right now. You be nice to your sister, you don’t hit, OK? Turn the TV on so they can’t hear.” “Come sit down.” “This is too close to my house.” “This is the Minnesota State Patrol. You are in violation of —” [explosion] “All of the army tanks, I don’t know what they’re shooting in the air, but just to see their presence is — if you could put all the money and time into what you’re doing right now, you can put the money and time into fixing the problem. Is that the bullets, the rubber bullets? [child crying] What’s the matter? Come here.” “Here, Autumn.” “It’s OK, it’s OK.” “Mom, can she have this?” “Yes, she can” “Can Mommy change your diaper? When I’m with my children and I’m just thinking about what’s going on around us, I kind of feel like, ‘Was this selfish for me to bring them into the world that we’re living? What kind of future do they have? Is this what they have to look forward to?’ Yeah, it’s time to go to sleep.”