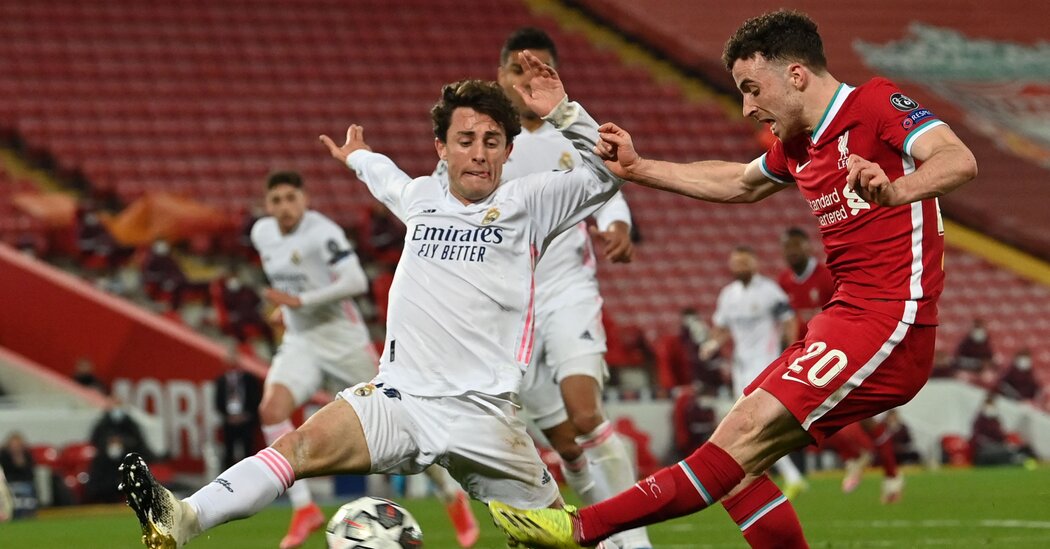 LONDON — A group of the world’s richest and most storied soccer clubs has agreed in principle on a plan to create a breakaway European club competition that would, if it comes to fruition, upend the structures, economics and relationships that have bound global soccer for nearly a century.

After months of secret talks, the breakaway teams — which include Real Madrid and Barcelona in Spain; Manchester United, Manchester City, Liverpool and Chelsea in England; and Juventus and A.C. Milan in Italy — could make an announcement as early as Sunday, according to multiple people familiar with the plans.

The so-called super league they have agreed upon — an alliance of top clubs closer in concept to closed leagues like the N.F.L. and the N.B.A. than soccer’s current model — would bring about the most significant restructuring of elite European soccer since the 1950s, and could herald the largest transfer of wealth to a small set of teams in modern sports history.

In its current form, European soccer supplements domestic league play — an English league for English teams, a Spanish one for Spanish clubs — with Continental competitions like the Champions League. Both funnel hundreds of millions of dollars of annual television and sponsorship revenue to the world’s richest clubs, who regularly qualify for the European play based on their success in their own leagues. But the format also sustains smaller teams in each country, who benefit from the gloss of their encounters with the giants and share in the money those teams bring in from broadcasters.

The new super league model would change that, by effectively walling off the richest clubs in their own closed competition — and allowing them to split billions of dollars in annual revenue among themselves. According to projections shared with prospective clubs earlier this year, each of the teams could earn more than $400 million just for taking part — more than four times what the Champions League winner took home in 2020.

At least 12 teams have either signed up as founding members or expressed interest in joining the breakaway group, including six from England’s Premier League, three from Spain’s top division and three from Italy’s, according to the people with knowledge of the plans.

European soccer officials moved quickly to try to block the plan. The Premier League condemned the concept in a statement and sent a letter to its 20 member clubs warning them not to take part, and its top officials and their counterparts in Spain and Italy held emergency board meetings on Sunday.

Officials at European soccer’s governing body, UEFA, labeled the proposal for a closed super league a “cynical project” in a statement that was co-signed by the Premier League, La Liga in Spain and Italy’s Serie A, as well as the soccer federations of each country.

But UEFA also was taking the threat seriously. Its leaders spent the weekend in discussions about how to block the plan, including banning the breakaway teams from their domestic leagues and blocking their players from competing for their national teams in events like the World Cup. UEFA also pointedly reminded the breakaway clubs (and, effectively, their players) that FIFA, soccer’s global governing body, and its six regional confederations have backed that threat.

“We will consider all measures available to us, at all levels, both judicial and sporting in order to prevent this happening,” the UEFA statement said. “Football is based on open competitions and sporting merit; it cannot be any other way.”

Still, UEFA began contacting lawmakers at the European Union, hoping the bloc would be able to strengthen its hand in preserving the status quo. Politicians in France and England quickly signaled their opposition to the plans.

The teams committed to the super league are, for the moment, limited to a dozen clubs from Spain, Italy and England. A cohort of six teams from the Premier League — United, Liverpool, Manchester City, Arsenal, Chelsea and Tottenham — represents the biggest grouping from a single country. Atlético Madrid is the other team from Spain that is said to have endorsed the project, while the Milan rivals Internazionale and A.C. Milan would join Juventus as Italy’s representatives.

The leaders of the breakaway group have been trying to get other top teams, like Germany’s Bayern Munich and Borussia Dortmund and the French champion Paris St.-Germain, to commit. But to date those clubs — and others — have declined to walk away from the domestic structures and Continental competitions that have underpinned European soccer for generations.

P.S.G., for example, has been invited to join but has so far resisted the overtures. Its president, Nasser al-Khelaifi, sits on the UEFA board and also heads beIN Media Group, the Qatar-based television network that has paid millions of dollars to UEFA for the right to broadcast Champions League games.

The New York Times contacted a number of clubs involved in the breakaway plans but all declined to comment or did not respond. But the Premier League wrote to its 20 clubs after a board meeting on Sunday, warning them that the league’s rules bar clubs from joining outside competitions without approval and urging them to “walk away” from the idea.

“This venture cannot be launched without English clubs and we call upon any club contemplating associating themselves or joining this venture to walk away immediately before irreparable damage is done,” it said in a letter to the teams.

The timing of Sunday’s news appeared designed to overshadow UEFA’s plan to ratify a newly designed Champions League on Monday. That competition would be decimated by the departure of its biggest teams.

The repercussions of a split between European soccer and its best-known, best-followed and most deep-pocketed clubs would be seismic. Without the top teams, UEFA and the leagues would face demands for millions of dollars in refunds from the broadcasters who pay billions for television rights to air their tournaments. The clubs would lose revenue streams that could cripple their budgets as European soccer continues to emerge from the financial wreckage caused by the coronavirus pandemic, and any ban on national team play could affect their ability to recruit top talent.

Among the most notable teams involved in the breakaway group is Juventus, the serial Italian champion. Its chairman, Andrea Agnelli, also leads the European Club Association, an umbrella body for more than 200 top division clubs, the majority of which will be left out of the proposed super league. Agnelli is also a member of UEFA’s executive board. When asked by The Times this year to discuss his role in the talks of a breakaway league, he brushed off the idea as a “rumor.”

Still, according to documents reviewed by The Times in January, plans for the breakaway league had gathered pace since last summer. Top clubs sought to take advantage of uncertainty in the soccer industry caused by the pandemic to forge a new path that would ensure a degree of financial stability for them but would also almost certainly lead to a significant — and potentially devastating — loss in value and revenue for teams excluded from the project.

Each of the would-be permanent members of the proposed super league is being promised 350 million euros, or $425 million, to sign up, the documents said.

Under the proposals reviewed at the time, the super league, which would play its matches in the middle of the week, sought to secure 16 top soccer teams as permanent members and to add four qualifiers from domestic competitions. The clubs would be split into two groups of 10, with the top four teams in each group qualifying for the knockout stages, culminating in a final that would take place on a weekend.

Weekends would be reserved for domestic matches, as they currently are, under the assumption that governing bodies would not follow through on their threats to expel their biggest teams.

The new super league would, according to the documents, generate hundreds of millions of dollars in additional revenue for the participating teams, which are already the richest clubs in the sport. The group had entered into discussions with JPMorgan Chase & Co. to raise financing for the project, according to people with knowledge of the matter. The firm has so far declined to comment.

Earlier this year, UEFA found a powerful ally in opposition to the plans in FIFA. FIFA warned that any player who took part in such an unsanctioned league would be banned from appearing in its events, including the World Cup. The statement came after UEFA’s president, Aleksander Ceferin, demanded support from his FIFA counterpart, Gianni Infantino, amid mounting speculation that the breakaway group had FIFA’s backing.

European soccer leaders huddled on the telephone and in video conferences over the weekend to forge a counterattack. However, finding a solution to the potential loss of the biggest brands in soccer is not an easy task. The Premier League, for example, would lose much of its sheen — and almost certainly a lot of the commercial appeal that has turned it into the richest league in soccer — should it move to banish its top six teams.

As member-owned clubs, Barcelona and Real Madrid would likely require the support of the thousands of their supporters before formally joining, and any German clubs that agree to take part would face similar obstacles. All can expect heavy internal opposition; fan groups from across Europe had already voiced opposition since details of the plans for a super league emerged earlier this year.

“More to the point, it is driven exclusively by greed,” the group said. “The only ones who stand to gain are hedge funds, oligarchs, and a handful of already wealthy clubs, many of which perform poorly in their own domestic leagues despite their inbuilt advantage.”