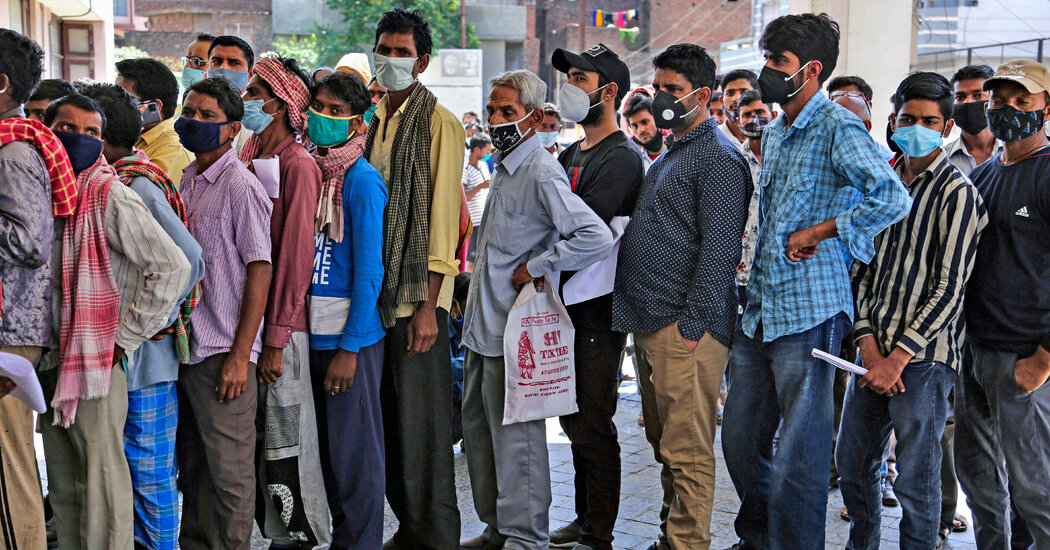 NEW DELHI — A lethal, fast-paced second wave of the coronavirus pandemic has brought India’s health care systems to the verge of collapse and is putting millions of lives and livelihoods at risk.

The newspapers and social media are scrolls of horror and failure of the health system. There are reports of lines of ambulances with patients waiting outside the largest Covid facility in Ahmedabad in the western state of Gujarat because ventilator beds and oxygen had run out.

On Friday in the northern city of Lucknow, Vinay Srivastava, a 65-year-old journalist, shared his falling oxygen levels on Twitter, tagging government authorities for help. Overburdened hospitals and laboratories wouldn’t take calls from his family. The last tweet from Mr. Srivastava’s handle described his oxygen saturation level at 52, way below the 95 percent, which is considered normal. Nobody helped. He died on Saturday.

At a crematory in the central city of Bhopal, residents reported having not seen as many cremations since 1984, when a gas leak from a Union Carbide pesticide plant in the city killed around 5,000 people. On Tuesday around 11 a.m. in Delhi, the national capital, with more than 18 million people, only 40 I.C.U. beds were available for Covid-19 patients.

India has had a total of 15.3 million reported coronavirus cases to date, with reported deaths to date of 180,000 people. A survey funded by the leading government body for medical research, indicated that there were roughly 30 infections corresponding to each reported case.

Most reports about the collapsing health care system are from major Indian cities. We know little about the devastation in rural India, where about 70 percent of India’s 1.3 billion people live and where there are far fewer hospital beds and medical personnel. Federal officials have acknowledged that the pandemic is shifting toward smaller cities and rural areas.

How did things change so dramatically between March and April?

India’s rapid slide into this unprecedented crisis is a direct result of complacency and lack of preparation by the government. As the number of cases dropped significantly in mid-February, the Indian government and various policymakers, cheered on by a pliant, triumphalist media, prematurely declared victory against the pandemic. By early March, senior government ministers were speaking about the endgame of the pandemic in India.

Cricket matches where tens of thousands of spectators filled stadiums were allowed, and movie theaters were opened. The government did nothing to prevent enormous religious gatherings such as the ongoing Kumbh Mela, a festival in Haridwar in the northern state of Uttarakhand, where millions of Hindus gathered for a dip in the River Ganges. Unsurprisingly, Covid-19 cases in Haridwar have soared.

India proceeded with elections in five states in multiple phases over a month. And one of the most charged political contests unfolded in West Bengal, where the polls are being conducted in eight phases between late March and late April. Despite the rising cases, numerous public rallies were held, with tens of thousands of people cramped together without masks. Although precise data on the correlation between political campaigning and the Covid-19 spike is unavailable, the number of cases in West Bengal increased tenfold from early to mid-April — several times the rates in the crowded cities of Mumbai and Delhi.

Opinion Conversation Questions surrounding the Covid-19 vaccine and its rollout.

The mass political, religious and sporting events, which are extensively covered by the Indian media, sent mixed messages about the seriousness of the pandemic. Popular impatience to get back to earlier lives made things worse. Indians started mixing widely and playing down the threat also because there is an unfounded sense among a large number of Indians that exposure to pollution and microbes had endowed them with superior immunity.

It was inevitable the virus would roar back. Indians turned out to be as susceptible to Covid-19 as everyone else. I was one of the researchers for the world’s largest Covid-19 contact tracing study last year, covering over 660,000 people in two southern Indian states. We found that an early lockdown — it began when there were fewer than 1,000 reported cases — had kept the virus under control.

The risk of getting infected through exposure to someone with the coronavirus is no different in India. The proportion of people who died after a Covid-19 diagnosis is lower in India compared with many other countries. But that is simply because 65 percent of Indians are under 35 years old.

The first wave of Covid was concentrated in poor urban areas, from which it dispersed to rural population centers. Although we don’t have hard data on the socioeconomic status of those infected during the second wave, cases now seem to have reached the middle class and rural India.

The rate of vaccination slowed down in the past week and even stopped in some states because of lack of supply. At the current vaccination rate, it will take till the end of 2022 to fully vaccinate 70 percent of the Indian population, the approximate level needed for achieving herd immunity. India urgently needs investments to increase its vaccine production capacity to over 12 million doses a day. If the country achieves that, it can vaccinate 70 percent of its population in six months.

Finally, there is the uncertainty introduced by new variants and, with them, the risk of reinfections that might not be stopped by the vaccines. There is anecdotal evidence that the new wave of Covid-19 cases in India is attacking a younger population, including children, and resulting in more rapid disease progression than seen earlier.

There is need for systematic evidence to link the upswing in cases and easier transmissibility and lethality of novel variants. One variant, B. 1.617, that may have originated in India is spreading widely and has been found in other countries.

Can India get out of the current situation?

India no longer has the option of another national lockdown because of the crushing effect on the economy, but more local and state lockdowns are likely. Indians will have to self-protect, and the Indian government needs to urgently send out consistent messages about the seriousness of the disease.

The Indian government needs to emphasize the mandatory use of masks and quickly move to ban all mass gatherings. Without consistent messaging and a science-led approach from the government, India risks giving back the hard-won gains made through the nationwide lockdown a year ago.

The unforgiving virus must be denied opportunities to transmit.

Ramanan Laxminarayan is an economist and an epidemiologist. He is the director of the Center for Disease Dynamics, Economics & Policy in Washington and a senior research scholar at Princeton.