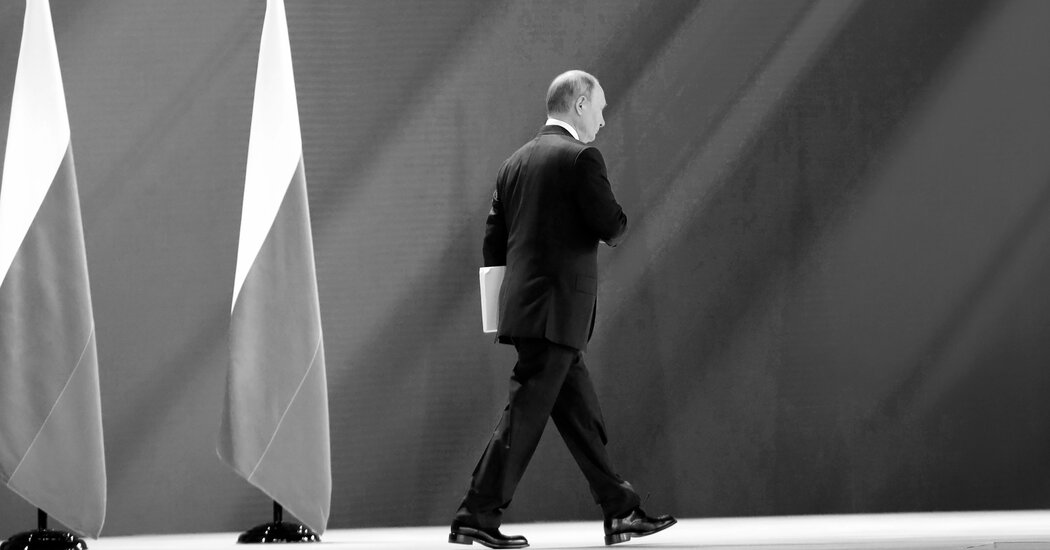 With his troops massing on Ukraine’s borders, his sharpest critic on a hunger strike, his government under a new batch of sanctions levied by Washington and a major surprise expected from neighboring Belarus, Russia’s president, Vladimir Putin, addressed his nation on Wednesday. Almost entirely, as it turned out, about domestic affairs.

That leaves the reasons for an alarming buildup of Russian military forces along Ukraine’s southern border a mystery, probably a deliberate one. But whatever game Mr. Putin is playing — and a lethal buildup like that could not happen without his say-so — it’s not a wise one. More than 13,000 lives have been lost in the seven-year Russia-Ukraine conflict, including 298 people aboard a Malaysian airliner downed by trigger-happy separatists.

Mr. Putin’s address did touch, relatively briefly, on international affairs, but it was largely a familiar plaint about Russia being picked upon “without any reason,” along with chest-thumping about an “asymmetric, fast and tough” response should anybody think to cross a “red line” against Russia. That flourish raised eyebrows in the West, even though Mr. Putin never said where the red line was.

But there was no mention of the current situation around Ukraine — nor of Aleksei Navalny, the dissident said to be in serious condition in a prison clinic; nor about what the Belarus president, Aleksandr Lukashenko, means by his talk of an impending “very serious” decision, which has prompted speculation about a formal union with Russia.

Mr. Putin has good domestic political reasons to address economic and social issues, including the struggle with Covid-19 in Russia, given his sagging ratings and parliamentary elections five months away. Ukraine is not a major concern among average Russians, who have been falsely assured that their troops are not involved, unless Russian soldiers start coming back in body bags. Polls show that Russians prefer economic development to dreams of a resurgent Great Russia, and at 68, Mr. Putin no longer holds the appeal he had when he came to power at 46, especially among younger Russians.

That is one reason analysts don’t think Mr. Putin really intends any military action against Ukraine. Another reason is that the troop movements have been almost deliberately visible, but not suggestive of imminent action. It is in any case unlikely that Mr. Putin would try to overrun the rebel-held provinces of Ukraine, given the level of reaction this would provoke in the West.

The posturing then raises various other possibilities. One is that Mr. Putin is trying to put new pressure on President Volodymyr Zelensky of Ukraine, the former actor who was elected two years ago on the promise of cleaning up Ukraine’s notoriously corrupt politics and making peace with Russia, but who has not made much progress on either front. This week, Mr. Zelensky declared that he was prepared to meet Mr. Putin at any time.

Mr. Putin may also be trying to forestall any American or European thoughts of throwing more weight behind Ukraine, and especially any notion of considering Ukraine for NATO membership. Or Mr. Putin is trying to demonstrate, at a time when U.S.-Russian relations are at a serious low, that he still must be reckoned with. Or all the above.

Whatever Mr. Putin’s motive, the military buildup in Crimea is a dangerous ploy, especially by a major nuclear power. Chances that the saber-rattling could lead to an accidental confrontation may be minute, but even that is not a risk a responsible power should accept.

This month, President Biden sent Mr. Putin a clear signal. The new sanctions ordered against Russia, and the expulsion of 10 Russian diplomats, were the response Mr. Biden had promised against hacking, election interference and the targeting of dissidents abroad. The administration took the unusual step of detailing evidence of Russian responsibility for the SolarWinds hack of government and corporate computer systems, making clear that this was unacceptable.

With the stick, however, came a carrot, a proposal for a summit at which the United States and Russia could shift to a more productive partnership on issues of common concern — including the opening of the Arctic to navigation, the Covid-19 pandemic, arms control, the rise of China and how to resolve the conflicts in Syria and Ukraine.

Mr. Putin arguably had no political choice but to throw out a clutch of American officials in retaliation. But it is now in his best interest to shift from tough guy to statesman. That would mean unwinding the military buildup, accepting Mr. Zelensky’s offer of peace talks and meeting with Mr. Biden.

The bulk of Mr. Putin’s address to his nation was a detailed program for dealing with the pandemic, climate change, infrastructure, income and all the other issues that are at the forefront of his people’s concerns. Mr. Putin must surely understand that the leadership he sought to project would be far better served by a meeting with a new American president in pursuit of peaceful coexistence than it would by his bullying Ukraine or hounding Mr. Navalny.