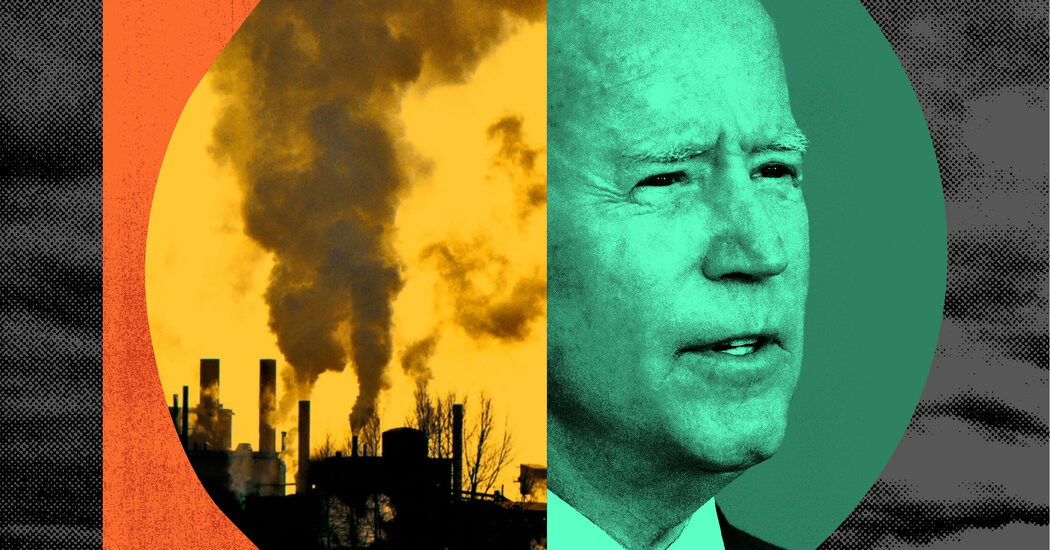 “We travel together, passengers on a little spaceship, dependent on its vulnerable reserves of air and soil … preserved from annihilation only by the care, the work and, I will say, the love we give our fragile craft,” Adlai Stevenson, the U.S. ambassador to the United Nations, said in 1965. That ethos would inspire a generation of environmentalists to see the fates of this planet’s inhabitants as intertwined. By contrast, the ecologist Garrett Hardin, who was labeled a white nationalist by the Southern Poverty Law Center, in 1974 urged a “lifeboat ethics”: for rich countries to be “on our guard against boarding parties” in predominantly nonwhite countries whose residents he saw as an intolerable strain on the planet’s resources.

Racked by ever-worsening fires and floods, our little craft is not doing well. This week, the White House is welcoming world leaders to a virtual summit on curbing climate destruction. Countries will present their plans to meet the goal inscribed in the Paris Agreement to cap warming at “well below” 2 degrees Celsius. President Biden has pledged to cut emissions at least in half from 2005 levels by 2030, aiming for “net zero” emissions by 2050.

But accounting for the United States’ outsize responsibility for the climate crisis requires much bolder action, according to a recent recommendation from several groups, including Friends of the Earth U.S. and ActionAid USA: “a reduction of at least 195 percent of U.S. greenhouse gas emissions” compared with 2005 levels by 2030 — 70 percent cuts within U.S. borders and “the equivalent of a further 125 percent reduction” by providing support for emissions reductions abroad.

The question, then: Does the White House want to helm a spaceship or a lifeboat?

Whatever Mr. Biden decides, he must confront some brutal truths. Following the Trump presidency and decades of U.S. officials’ helping sabotage climate ambition, America suffers from a sizable trust deficit with the rest of the world. This week’s summit offers a decent summary of recent history: Globe-trotting officials talking up U.S. leadership and pressuring other countries to do more, with little to show for themselves at home. Rebuilding trust and reckoning with the climate crisis demands a sea change in U.S. foreign policy — tweaks around the edges will not do.

This, in turn, requires a wholesale reorientation of U.S. trade policy and institutions like the World Bank and the International Monetary Fund. Established at the 1944 Bretton Woods Conference of allied nations to guide the global economy in the wake of World War II and the Depression, these institutions meet the needs of a world that no longer exists. Multilateralism must be radically reimagined for a hotter, ideally more democratic 21st century. The United States can help lead that process, but must forfeit the dream of steering Spaceship Earth on its own.

Domestically, the Biden administration has proposed a more sweeping climate agenda than many expected, focused on job-creating investments in clean energy and electric vehicles, and support for communities on the front lines of the crisis. Yet so long as these commitments fail to adequately stem flows of carbon at home and abroad, the United States will continue gobbling up an inordinate amount of the world’s carbon budget — the amount of carbon that can be released into the atmosphere before warming tips beyond 1.5 or 2 degrees Celsius. That leaves poorer countries to shoulder an unbearable burden for both decarbonization and climate chaos.

This isn’t surprising. U.S. foreign policy has generally fueled, not constrained, emissions. (A study from two universities in England found that if our military were a country, its emissions from fuel usage alone would make it the planet’s 47th-largest emitter of greenhouse gases.) Billions of dollars’ worth of wide-ranging subsidies for fossil fuels merged with cheap credit after the Great Recession to increase oil and gas production. Reaching the limits of domestic refining capacity, executives lobbied to repeal longstanding restrictions on crude oil exports, which increased 750 percent between 2015 and 2019 according to a report from Greenpeace USA and Oil Change International. President Barack Obama’s State Department enthusiastically promoted fracking abroad through its Global Shale Gas Initiative, making it key to what the department’s director of policy planning, Jake Sullivan, referred to as “economic statecraft.”

Bipartisan policies have similarly safeguarded fossil fuel profits. Provisions across bilateral and multilateral trade deals the United States routinely negotiates, like the U.S.-Mexico-Canada Agreement, allow companies to sue governments should their public policy be considered discriminatory. The Investor-State Dispute Settlement system enforces these rules in arbitration proceedings that let investors recoup payouts from states for government policies like labor and environmental protections they object to.

The real power to constrain carbon, then, is found not at feel-good summits or buried in the fine print of the Paris Agreement: It’s in trade agreements, international law and bodies like the International Monetary Fund, the World Bank and the World Trade Organization. The United States has veto power over certain decisions these bodies make. To make good on its Paris goals, it should use it.

President Biden could help upend our current world order, redirecting the generous financial and diplomatic support the United States has offered emitters toward the common good. Declaring a national emergency, for instance, would unlock the authority to reinstate the crude-oil export ban, lifted just days after the Paris Agreement was brokered.

The United States could push creditors, including China, to embrace widespread debt relief. Easing such burdens is a precondition for many countries to cope with worsening weather. Relief could prevent them from turning to the quick cash promised by oil and gas development. That should be paired with a turn away from tying climate finance to onerous new debts, as loans now account for a large majority of public climate finance. A U.S. pledge of $800 billion through 2030 for global mitigation, adaptation and recovery efforts would set a standard for countries to pay their fair share.

The State Department can urge fellow Group of 20 members to follow through on longstanding calls to phase out fossil fuel subsidies. The department could, crucially, also work with fellow oil-producing countries to ensure that those whose public budgets rely on oil revenues — facing a $9 trillion shortfall — don’t crash violently out of the fossil fuel age.

There are plenty of signs of progress. The U.S. trade representative, Katherine Tai, has pledged to prioritize climate action, calling out the multilateral trading system for putting “countries with higher environmental standards at a competitive disadvantage.” Treasury Secretary Janet Yellen supports issuing $650 billion worth of funds via I.M.F. Special Drawing Rights to aid global recovery efforts — a worthy sum, but far below the $3 trillion that civil-society groups demand. Mr. Biden wants to eliminate fossil fuel subsidies. Amid U.S. officials’ escalating rhetoric toward China, the president’s climate envoy, John Kerry, and his Chinese counterpart agreed that their countries would cooperate on the climate crisis. And beyond requiring that banks disclose climate risks — an increasingly popular demand among Democrats — financial regulators under existing Dodd-Frank powers could discourage and even prohibit Wall Street investments in fossil fuels, a means of limiting risks to the stability of the financial system like the climate crisis.

But while polling from Data for Progress, a progressive think tank, show that a Green New Deal and climate-smart trade policy are popular among voters, any change to foreign policy at the scale this crisis demands must survive an all-out assault from the fossil fuel industry, the lawmakers it funds and a foreign-policy establishment hellbent on placing America firmly back on top of its beloved rules-based international order. These fights are unavoidable and worth having.

As with the pandemic, global cooperation in the climate crisis is key — so is curbing corporate power. We’re all on this sick little craft together. Let’s try not to crash it.

Ms. Aronoff is a staff writer at The New Republic and the author of “Overheated: How Capitalism Broke the Planet — And How We Fight Back.”