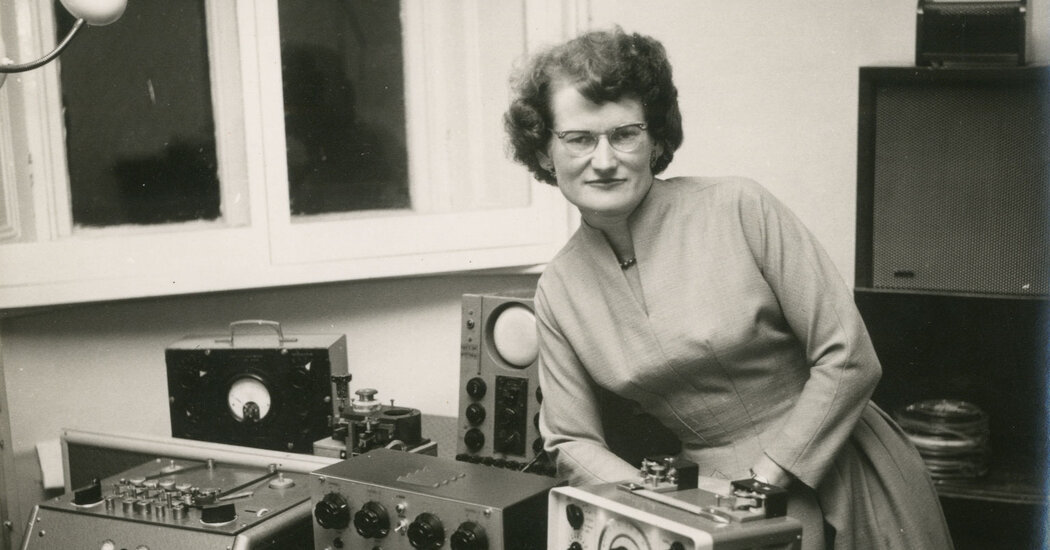 When you hear the phrase “electronic musician,” what sort of person do you picture? A pallid, wildly coifed young man hunched over an imposing smorgasbord of gear?

I’m guessing the person you are imagining doesn’t look like Daphne Oram, with her cat-eye glasses, demure dresses and respectable 1950s librarian haircut. And yet Oram is a crucial figure of electronic music history — the co-founder of the BBC’s incalculably influential Radiophonic Workshop, the first woman to set up her own independent electronic music studio and now one of the worthy focal points of Lisa Rovner’s bewitching new documentary “Sisters With Transistors: Electronic Music’s Unsung Heroines.” (The movie is streaming through Metrograph’s virtual cinema from April 23 to May 6.)

Born in 1925, Oram was an accomplished pianist who had been offered admission to the Royal Academy of Music. But she turned it down, having recently read a book that predicted, as she puts it in the film with a palpable sense of wonder, that “composers of the future would compose directly into sound rather than using orchestral instruments.”

Oram wanted to be a composer of the future. She found fulfilling work at the BBC, which in the late 1940s had become a clearinghouse for tape machines and other electronic equipment left over from World War II. Gender norms liquefied during wartime, when factories and cutting-edge companies were forced to hire women in jobs that had previously been reserved only for men. Suddenly, for a fleeting and freeing moment, the rules did not apply.

“Technology is a tremendous liberator,” the composer Laurie Spiegel says in Rovner’s film. “It blows up power structures. Women were naturally drawn to electronic music. You didn’t have to be accepted by any of the male-dominated resources: the radio stations, the record companies, the concert-hall venues, the funding organizations.”

But in the years since, pioneering women like Oram and Spiegel have largely been written out of the genre’s popular history, leading people to assume, erroneously, that electronic music in its many iterations is and has always been a boys’ club. In a time when significant gender imbalances persist behind studio consoles and in D.J. booths, Rovner’s film prompts a still-worthwhile question: What happened?

The primary aim of “Sisters With Transistors,” though, is to enliven these women’s fascinating life stories and showcase their music in all its dazzling glory. The film — narrated personably by Laurie Anderson — is a treasure trove of mesmerizing archival footage, spanning decades. The early Theremin virtuoso Clara Rockmore gives a private concert on that ethereal instrument that one writer said sounds like the “singing of a soul.” The synthesizer whiz Suzanne Ciani demonstrates, to a very baffled David Letterman on a 1980 episode of his morning show, just what the Prophet 5 synth can do. Maryanne Amacher rattles her younger acolyte Thurston Moore’s eardrums with the sheer house-shaking volume of her compositions.

Most hypnotic is a 1965 clip of Delia Derbyshire — Oram’s colleague at the BBC Radiophonic Workshop who is perhaps best-known for bringing the eerie original “Doctor Who” theme song to life — visibly enamored of her work as she gives a tutorial on creating music from tape loops, tapping her patent-leather sling-back flat to the beat she has just pulled out of thin air.

Like Oram, Derbyshire’s fascination with technology and emergent forms of music came out of the war, when she was a child living in Coventry during the 1940 blitz experiencing air-raid sirens. “It’s an abstract sound, and it’s meaningful — and then the all-clear,” she says in the film. “Well, that’s electronic music!”

These 20th-century girls were enchanted by the strange new sounds of modern life. In France, a young Éliane Radigue paid rapt attention to the overhead whooshes airplanes made as they approached and receded. Across continents, both Derbyshire and the American composer Pauline Oliveros were drawn to the crackling hiss of the radio, and even those ghostly sounds between stations. All of these frequencies beckoned them toward new kinds of music, liberated from the weight of history, tradition and the impulse to, as the composer Nadia Botello puts it, paraphrasing Amacher, “push around dead white men’s notes.”

From Ciani’s crystalline reveries to Amacher’s quaking drones, the sounds they made from these influences and technological advancements turned out to be as varied as the women themselves. Oliveros, who wrote a 1970 New York Times Op-Ed titled “And Don’t Call Them ‘Lady Composers,’” would likely deny that there was anything essential linking their music at all. But the common thread that Rovner finds is a tangible sense of awe — a certain engrossed exuberance on each woman’s face as she explains her way of working to curious camera crews and bemused interviewers. Every woman in this documentary looks like she was in on a prized secret that society had not yet decoded.

Situating electronic music’s origins in awe and affect may be a political act in and of itself. In her 2010 book “Pink Noises: Women on Electronic Music and Sound,” the writer and musician Tara Rodgers called for a history of electronic music “that motivates wonder and a sense of possibility instead of rhetoric of combat and domination.” Other scholars have suggested that electronic sound’s early, formative connection to military technology — the vocoder, for example, was first developed as an espionage device — contributed to its steady and limiting masculinized stereotyping over time.

And then there’s the commodifying force of capitalism. For a time in the 1970s — when much of the equipment used to make electronic music was prohibitively expensive — Spiegel worked on her compositions at Bell Labs, then a hotbed of scientific and creative experimentation. But as she recalls, the 1982 divestiture of AT&T had an unfortunate aftereffect: “Bell Labs became product-oriented instead of pure research. After I left there, I was absolutely desolate. I had lost my main creative medium.”

Eventually, Spiegel took matters into her own hands, creating the early algorithmic music computing software Music Mouse in 1986. “What relates all of these women is this D.I.Y. thing,” Ramona Gonzalez, who records as Nite Jewel, says in the film. “And D.I.Y. is interesting because it doesn’t mean that you’ve explicitly, voluntarily chosen to do it yourself. It’s that there are certain barriers in place that don’t allow you to do anything.”

Watching Rovner’s documentary, I could see unfortunate parallels with the film industry. Women were employed more steadily and often in more powerful positions during the early silent era than they would be for many years afterward, as Margaret Talbot noted several years ago in a piece for The New Yorker: The early industry hadn’t “yet locked in a strict division of labor by gender,” but in time, Hollywood “became an increasingly modern, capitalist enterprise,” and opportunities thinned for women.

The masculinization of electronic music likely resulted from a similar kind of streamlined codification in the profit-driven 1980s and beyond, though Rovner’s film does not linger very long on the question of what went wrong. It would take perhaps a more ambitious and less inspiring documentary to chart the forces that contributed to the cultural erasure of these women’s achievements.

But “Sisters With Transistors” is a worthy corrective to a persistently myopic view of musical history, and a call to kindle something new from whatever it sparks in Daphne Oram’s revered “composers of the future.”

“This is a time in which people feel that there are a lot of dead ends in music, that there isn’t a lot more to do,” Spiegel reflected a few decades ago, in a clip used in the film. “Actually, through the technology I experience this as quite the opposite. This is a period in which we realize we’ve only just begun to scratch the surface of what’s possible musically.”