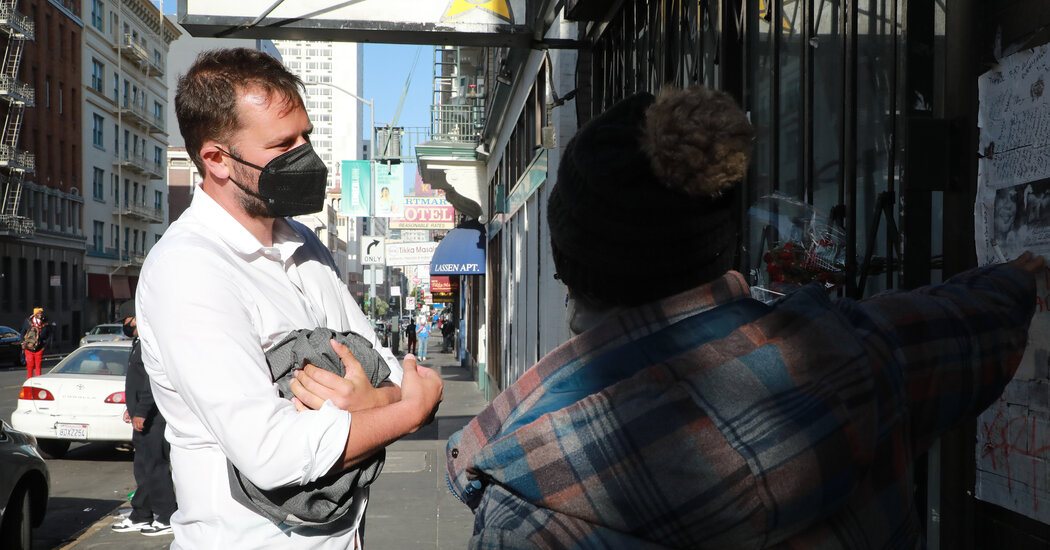 SAN FRANCISCO — The drugs killed them in plain view — in front of the public library, at the spot on Powell Street where the cable car used to turn around. Others died alone in single-room apartments or in camping tents pitched on the pavement, each death adding to an overdose crisis that is one of the worst in the nation.

Drug overdoses rose across the country during the coronavirus pandemic. But in San Francisco, they skyrocketed, claiming 713 lives last year, more than double the 257 people here who died of the virus in 2020.

San Francisco’s overdose death rate is higher than West Virginia, the state with the most severe crisis, and three times the rates of New York and Los Angeles. Although overdose data from the past year is incomplete, one researcher found that San Francisco — where overdoses have more than tripled since 2017 — has more overdoses per capita than any major city on the West Coast.

The drug deaths in San Francisco — about two a day — stem from a confluence of despair. Fentanyl, an opioid that was not a severe problem for the city just a few years ago, has fully permeated its illicit drug market and was a factor in most overdoses last year. A culture of relative tolerance toward drug use has allowed it to spread quickly. And fentanyl, much more powerful than heroin, has found fertile ground among the city’s thousands of homeless residents, who have died of overdoses in large numbers.

For officials in San Francisco who have prided themselves on their handling of health emergencies, from H.I.V. four decades ago to Covid-19 today, the epidemic of overdose deaths has been both humbling and alarming. Many believe that the city’s preoccupation with the pandemic has eclipsed concern over the drug deaths and blunted the urgency of the moment.

“I can say for sure that what we are doing is not working and that it’s getting worse every single day,” said Matt Haney, a member of the city’s Board of Supervisors who represents the Tenderloin, a district of low-income housing in the heart of the city that has seen the most overdoses. “I get offered drugs every time I step outside. It’s overwhelming.”

Unlike areas in the rural Midwest that have also been devastated by fentanyl, San Francisco has a well-funded and sophisticated public health system. The overdose crisis is calling into question the city’s nonjudgmental tolerance of illicit drugs and adequacy of its programs that focus on providing users with clean needles and medication to reverse overdoses.

City officials say they want to reinforce and expand this so-called harm reduction model. Critics agree harm reduction is necessary, but say something needs to be done to curtail the supply of drugs and reach out more aggressively to addicts, especially when the difference between life and death is measured in milligrams.

On a recent morning in the Tenderloin, Amber Neri sat outside a boarded-up shop, casually using a torch to heat up a fentanyl mixture on a piece of foil. Blocks from City Hall, she paused before inhaling the drug. “Ten? Fifteen?” she said when asked how many of her friends had overdosed.

A former nursing assistant from Silicon Valley, Ms. Neri spoke of the dangers of living on the street and witnessing the beating death of her boyfriend in an alley in August 2019. As she talked about fentanyl, a young man in distress nearby interjected. “This stuff,” he yelled, “is so hard to quit.”

Minutes later two police officers approached. They politely asked Ms. Neri and other users, most of them homeless, to move to the other side of the street. “People used to say, ‘Put away your pipes! The cops are coming,’” she said. “Now the cops don’t make them put them away anymore.”

But the dangerous mix of fentanyl with the city’s existing homelessness crisis has experts worried that the pace of overdose deaths could increase because of the intractable nature of both problems.

Unlike in East Coast and colder-climate cities that have vast shelter systems, most homeless people in San Francisco sleep on the streets. During the pandemic, the city has housed several thousand homeless residents in hotels and trailers but thousands more continue to sleep outdoors.

Alex Kral, an epidemiologist, has conducted surveys of drug users in San Francisco for the past quarter-century. The percentage of people in these surveys who are homeless has risen from roughly 25 percent when he first began his research to about 80 percent today.

“You can’t disentangle the overdose mortality crisis from the housing crisis,” Dr. Kral said. “They are completely interlinked.”

San Francisco sits in a paradoxical position in the American imagination. To those on the right, it is Nancy Pelosi’s district, the city of out-of-control government spending and socialist ideals. Yet the city also sits at the center of a brand of razor-sharp American capitalism of tech entrepreneurs and venture capitalists vying to be the next graduating class of billionaires.

During the pandemic, the city has been quiet, with tech workers on Zoom at home and a dearth of commuters leaving the streets unclogged. Yet in neighborhoods like the Tenderloin, the sidewalks have still hummed with the commerce of drug dealing.

The Tenderloin police precinct seized 5,449 grams of fentanyl in 2020, four times more than the previous year. In this compact neighborhood of 50 square blocks, it was enough, in theory, to kill 2.7 million people.

The fentanyl crisis is distinct from previous opioid crises because an overdose can occur minutes after taking the drug, said Peter Davidson, an assistant professor at the University of California, San Diego.

“With heroin you typically have one to two hours between last use and when you stop breathing — a pretty big window for someone to find you and to do something about it,” said Dr. Davidson, the researcher calculating overdose rates in West Coast cities. “With fentanyl you’re talking about five to 15 minutes.”

The fast-acting nature of the drug makes loneliness deadly. As a nasal spray or injection, naloxone is used on drug users who have stopped breathing or show other signs of an overdose. But it only works when other people are around.

The Drug Overdose Prevention and Education Project, an initiative funded by the city, gave out more than 50,000 doses of naloxone last year, said Kristen Marshall, the project manager. About 4,300 overdoses were reversed using the lifesaving drug, she said.

“We would have had thousands of dead bodies,” Ms. Marshall said.

As the drug deaths have surged, the city’s strategy has been to double down on the harm reduction policies that were successful in reducing heroin overdose deaths.

“We have had some success and we have to grow our successes,” Dr. Hali Hammer, who oversees overdose prevention for the city’s Department of Public Health. Part of the answer is to more widely distribute naloxone, she said.

“What we as the public health department are responsible for is preventing death by giving people the resources they need to use safely,” Dr. Hammer said.

Mr. Haney, the city supervisor, is critical of this approach. Reversing overdoses, he argued, was necessary but not enough.

“If all you’re doing is handing out what someone needs to use it’s tragically inadequate,” he said.

In the Tenderloin, everyone seems to have an overdose story.

Darell Thomas, who works for a nonprofit organization, recalled the man in his 50s who lay motionless on the sidewalk two weeks ago. Mr. Thomas squirted a dose of naloxone into the man’s nose but it was too late. “He was gone,” Mr. Thomas said.

On a recent afternoon, the police chief, Bill Scott, toured the Tenderloin with top aides.

Drug dealers walked around corners as they approached. A shirtless man sat in the middle of the street, prompting the chief’s entourage to call for medical assistance. Along Market Street, the wide boulevard that cleaves downtown, the chief paused to tell a fentanyl user to put away two hypodermic needles that lay on the pavement.

“Keep it clean,” the chief said.