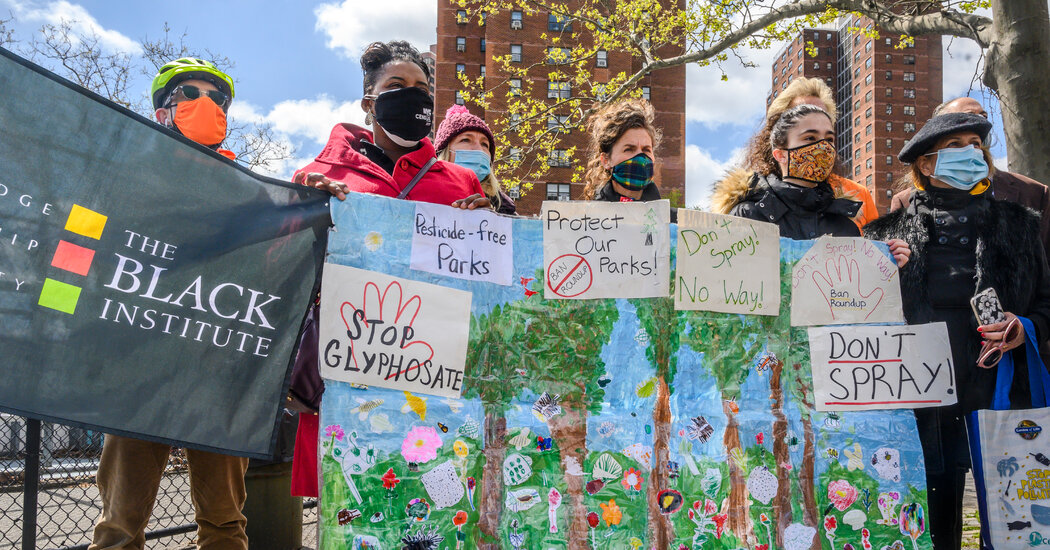 At the rally, they said the bill would remove dangers that have long been invisible, since toxins can spread through the ecosystem and linger. Another activist group mapped the hundreds of places where the chemicals have been used in New York City with the help of data gathered through Freedom of Information Act requests. Pesticides are used in places people might not think of, like on asphalt basketball courts and walkways to stop weeds from sprouting through cracks.

“You put your blanket down, maybe you’re laying with the love of your life,” said Bertha Lewis, president of an advocacy and research group that pushed for the bill. “And while you’re kissing and smooching you’re getting poison all over you. That’s nasty.”

Her group, The Black Institute, found that toxic pesticides have been used disproportionately in majority-Black neighborhoods in Harlem, Queens and Brooklyn, according to its 2020 report “Poison Parks.” The advocates also found that the parks workers who are most likely to be exposed to toxins are Black and Latino.

The mostly asphalt playground where the rally took place, used by many Black residents from an adjacent public-housing complex, was sprayed more often than the lush Carl Schurz Park, just six blocks away in a wealthy, heavily white area, Mr. Kallos said. LaKeesha Taylor, at the rally with her children, said she decided to fight for the ban after learning that pesticides might have been used in the courtyard of the complex, where she grew up growing tomatoes and collards. “It wasn’t safe to be eating that,” she said, adding of city agencies, “They’re killing us.”

City agencies’ use of glyphosate, the main ingredient in the weed killer Roundup, has dropped since 2014, when Mr. Kallos first introduced a version of the bill. Since then, it has been ruled a carcinogen and Roundup’s manufacturer, Monsanto, later acquired by Bayer, has been ordered to pay $158 million, in separate lawsuits, to two California cancer patients, a school groundskeeper and a gardener, who were sickened by it.

Agencies can seek waivers to use toxins in specific cases, but input is required from the local community board, council member and borough president. Exceptions will include areas on median strips, where using organic products, which require more frequent applications, would more often expose workers to danger from vehicles.