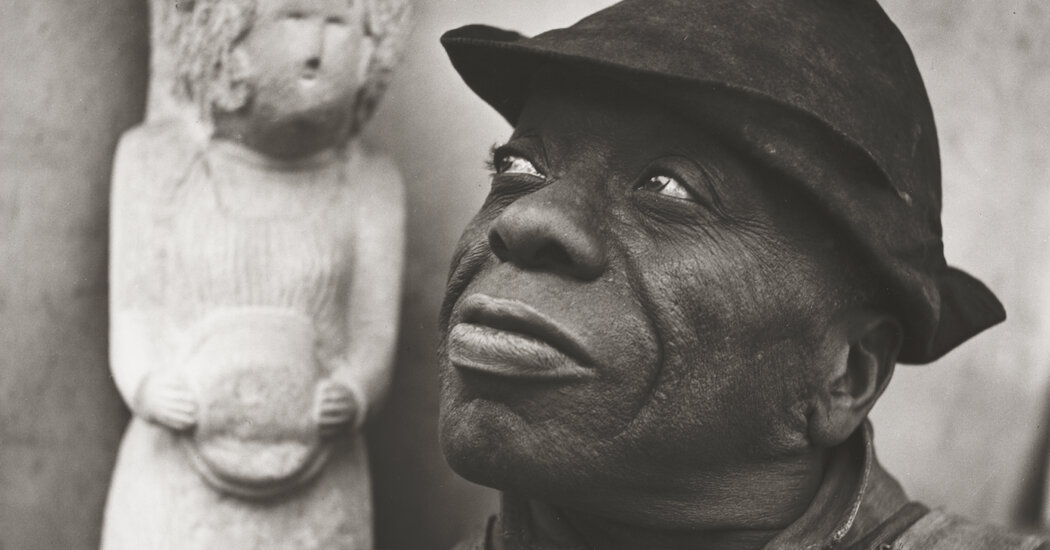 NASHVILLE — I’ve never been all that interested in Picasso, but the show at the Frist Art Museum here would be my first chance to see an entire exhibition of Picasso’s figures in the flesh, so I rushed to buy tickets before it sold out. Maybe these paintings, drawings and sculptures would be what made me fall in love with the terrible, brilliant Minotaur that was Pablo Picasso.

Besides, Nashville is the only place in the country where it’s possible to see this career-spanning retrospective, a collaboration with the Musée Picasso-Paris on the occasion of the Frist’s 20th anniversary. How often does a thing like that happen to a city like this? Showing up for it was a civic duty as well as an artistic one.

To make the most of my visit, I asked my brother, Billy, to join me. In addition to being a gifted artist, Billy is also a gifted teacher. I knew he would help me put these artistic works into context, especially those I found troubling, without in any way attempting to excuse or justify the artist himself.

I was prepared to be troubled, but I wasn’t prepared for how visible the alchemical interaction between world and artist would be. Something about the paintings reminded me of the self-taught artist Howard Finster, a restless, singular mind who lived in rural Georgia until his death at 84 in 2001. Mr. Finster made the plywood leopard that sits on a bookcase in my family room — Billy bought it for me on a trip to the artist’s studio, “Paradise Garden,” nearly 30 years ago.

Like Picasso, Mr. Finster made art that hewed to no one’s vision but his own. But what the two artists share struck me as much more than simply an insistence on experimentation and originality. Some of the works in the Picasso exhibition seemed almost raw, created not in defiance of an artistic tradition but outside it altogether. Like everything, in other words, that Mr. Finster ever made.

“Am I making an ass of myself if I say these paintings remind me of Howard Finster?” I whispered to Billy.

“Well, Picasso was obviously inspired by African art,” Billy hedged. “It’s work that exists outside the academic tradition, like Finster’s, and Picasso was clearly embracing it and letting it inform his work.”

Sure enough, in the very next room there were two oil studies for “Les Demoiselles d’Avignon” — Picasso’s great Cubist masterpiece now hanging in the Museum of Modern Art — along with several works on paper that were also very obviously inspired by the African and Oceanian artifacts he had seen at the Musée du Trocadéro. And in the same room a placard on the wall included a statement from Picasso: “My greatest artistic emotions were felt when the sublime beauty of sculptures made by anonymous artists from Africa suddenly appeared to me. These works by a man of religious faith, passionate and strictly logical, are the most powerful and beautiful the human imagination has produced.”

So I wasn’t entirely wrong in seeing a connection, however faint, between the art made by a great Modernist painter and the art made by a visionary Georgia preacher. But the little wooden leopard in my family room wasn’t the best analog to Picasso’s paintings at the Frist, as it turns out. It was just the nearest to hand.

A better one, as Billy reminded me, is the stone carvings of William Edmondson, who was born in rural Davidson County (in what is now Nashville) in 1874 and whose parents had been enslaved. During the last 20 years of his life, Mr. Edmondson earned his living by making cemetery headstones and yard decorations, though his work eventually came to the attention of the art world: In 1937, he became the first Black artist to have a solo show at the Museum of Modern Art. He died in 1951.

Despite the acclaim his work still enjoys in the art world, and despite a huge retrospective in 2000 at the Cheekwood Museum of Art here, William Edmondson is not a household name, even in Nashville. But he may be yet: Cheekwood recently announced a new Edmondson exhibit that will open in August, taking into account new scholarship on his work.

On the very day of my Frist visit, the Nashville Scene published an article about Mr. Edmondson, written by my friend Betsy Phillips, a local historian. During the pandemic quarantines, Betsy had set herself the task of cataloging every Edmondson headstone still standing in historically Black cemeteries in Middle Tennessee that she could find. After I left the Picasso exhibit, I emailed to ask if she had time to take me to see a few of those gravestones.

Betsy’s search was guided partly by incomplete prior cemetery surveys and partly by an intimate understanding of Mr. Edmondson’s style: his unique approach to lettering, the whimsical shapes of the headstones, the platforms where a carving could rest — an angel, perhaps, or a lamb, or a bird — and the particular way lichens grow on the stone stock he habitually used. The fact that lichen patterns on a tombstone is a tell for recognizing the work of one of the greatest stone carvers of Modernism touched me in a way I can’t even explain.

Of all the tombstones we saw that Saturday afternoon, only one still includes the unique carved figure that once rested at the top of most of the stones. The others are gone, the vast majority of them stolen by someone who knew their value, or destroyed by someone who didn’t. For that reason, I’m not identifying the cemeteries we visited.

Even in the context of this originality, generosity and beauty, there’s still a huge challenge inherent in any attempt to catalog Mr. Edmondson’s cemetery pieces. It’s a matter of “trying to bridge this enormous gap of both time and racism,” Betsy said. In an era when a Black man in the Jim Crow South could be lynched for nothing more than looking a white woman directly in the eyes, “You just can’t overestimate how dangerous it was for William Edmondson to be talented and to come to the attention of white people.” Especially when the person most responsible for bringing his work to a national audience was a white photographer named Louise Dahl-Wolfe.

So many of the great self-taught Southern artists faced the same racism and the same dangers, but continued to make remarkable work even so. I’m thinking of the Gee’s Bend Quilting Collective in Boykin, Ala., whose quilts have been the subject of exhibitions in the most prestigious museums in the country (and are now, for the first time, for sale online). The Times called their quilts in a 2002 show at the Whitney Museum “some of the most miraculous works of modern art America has produced.”

I’m thinking of Joe Light, a Memphis painter whose works are in the Tennessee State Museum’s collection — and in the Smithsonian and the Metropolitan Museum of Art, too. And Sam Doyle, who was born into the Gullah community on St. Helena Island off the coast of South Carolina and whose work hangs in the National Gallery of Art, the Smithsonian and the High Museum in Atlanta. And the Rev. Albert Wagner, the son of Arkansas sharecroppers, who was recently featured in a retrospective at the American Visionary Art Museum in Baltimore. “All my life I wanted to paint,” he once said. “I just didn’t know how. God gives directions and you have to follow them.”

Perhaps unsurprisingly, this is a common belief among self-taught artists of the rural South, where religious faith underpins so much of daily life. “I was out in the driveway with some old pieces of stone when I heard a voice telling me to pick up my tools and start to work on a tombstone. I looked up in the sky and right there in the noon daylight He hung a tombstone out for me to make,” Mr. Edmondson once said.

Whether that kind of confidence comes from a faith in God or a faith in the artist’s own genius, it is a powerful force for remaining true to your own vision, no matter how the world might ignore or misunderstand or revile it. Even more than technique or approach or style, that steadfast commitment to originality can link artists as disparate as a restless modernist from Spain and the son of enslaved people from Nashville. In 1931, the year William Edmondson took up carving tools, Pablo Picasso was completing a painting called “Le Sculpteur,” in which the rounded figures representing the sculptor’s work might have been shaped from Tennessee limestone.

When I was in a graduate writing program back in the mid-1980s, it was a cultural commonplace to believe that a writer’s social responsibility included giving voice to the voiceless. We understand now the error of that thinking. Nobody is voiceless. There are only people whose voices are not heard.

None of the self-taught artists I’ve mentioned here have been ignored. Their work hangs in private collections and prestigious museums in more places than I have room to note. But in 2018, Nashville nearly sold the site of William Edmondson’s home and studio to developers, and it was impossible not to notice the juxtaposition between the sold-out galleries of Picasso’s figures at the Frist, where these fiercely treasured works have been hung with such tender care, and the empty cemeteries where so many of William Edmondson’s headstones sit out in the wind and the rain, keeping company with groundhogs and growing fainter with every winter storm, under every brutal summer sun.

I found myself wondering about the people buried beneath those stones, people whose lives never ended up in a history book and whose creative life, whatever form it may have taken, never made it into a museum catalog. As Thomas Gray writes in “Elegy Written in a Country Churchyard,” a poem I used to teach my high-school students: “Full many a flow’r is born to blush unseen, / And waste its sweetness on the desert air.”

These lines are a reminder of how often the context into which artists are born determines both the expression of their genius and its reception by others. Shakespeare would still be Shakespeare whenever and wherever he arrived in the world, but he arrived during the literary flowering of Elizabethan England, and there’s no separating his art from the stage for which he made it.

The last cemetery Betsy and I visited is bounded on one side by a busy commuter thoroughfare, but somehow it seems to exist apart from both traffic and time. The creek that runs along another side was rushing with rainwater, and whitetail deer were lifting their heads and sniffing the air before picking their way through the trees and out of sight.

Margaret Renkl is a contributing opinion writer who covers flora, fauna, politics and culture in the American South. She is the author of the books “Late Migrations: A Natural History of Love and Loss” and the forthcoming “Graceland, At Last: Notes on Hope and Heartache From the American South.”