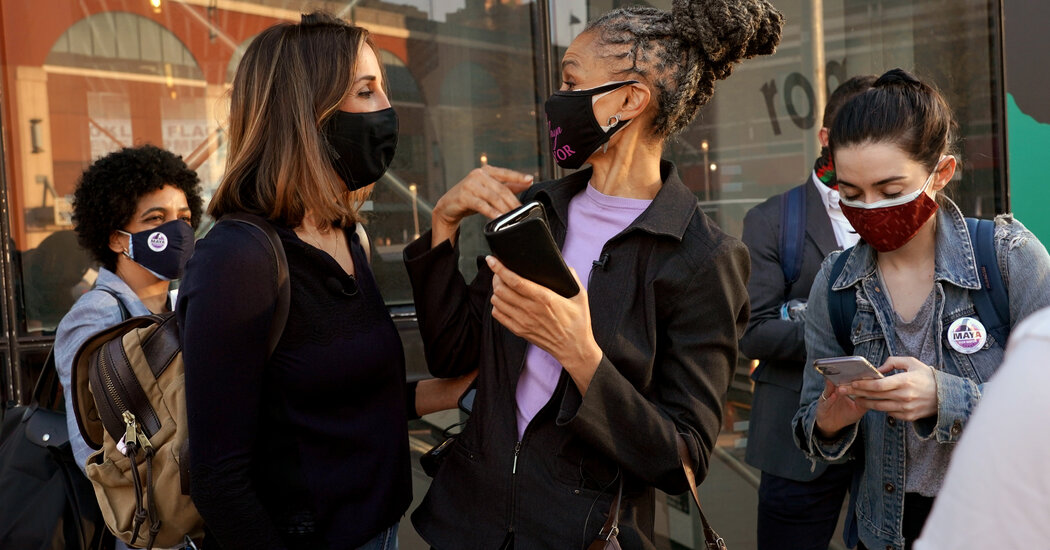 Raymond J. McGuire, a trailblazing Black businessman who is trying to parlay his decades of success on Wall Street into a successful run for mayor of New York City, has tried to discourage comparisons to Michael R. Bloomberg, the billionaire ex-mayor who won office in 2001 as a Republican.

His efforts to do so will not be helped by the latest financial disclosure statements, which cement the notion that he will be the wealthiest mayor, if elected, since Mr. Bloomberg.

He will also have one more competitor in the June 22 Democratic primary than originally thought. Here’s what you need to know about the race:

Of the four women trying to become New York City’s first female mayor, Maya Wiley, a former counsel to Mayor Bill de Blasio, may have the best shot: She is consistently in third or fourth place in early polling and was endorsed by the city’s largest union.

Now several women’s groups are beginning to coalesce behind her.

Amplify Her, a group that works to elect women in New York City, will announce its endorsement of Ms. Wiley this week. Marti Speranza Wong, the group’s executive director, said members liked some of Ms. Wiley’s proposals, including cutting $1 billion per year from the police budget and addressing the Black maternal mortality rate.

“It’s not just about electing any woman — it’s about sending a woman to City Hall who won’t shy away from tackling the deep inequities in our city,” she said.

Ms. Wiley was also recently endorsed by Emily’s List, which aims to elect Democratic women who are in favor of abortion rights, and by the Higher Heights for America PAC, which supports progressive Black women.

Emily’s List said Ms. Wiley would prioritize the city’s most vulnerable residents during the recovery from the pandemic and noted that New York City is behind other major cities like Atlanta, Boston and Chicago that have female mayors.

Ray McGuire will work for $1 a year

Mr. McGuire, who left his position as a vice chairman at Citigroup to run for mayor, will still receive payouts from his former employer over the next four years, and has numerous investments in securities and various businesses, according to a financial disclosure report from the Conflicts of Interest Board.

According to the report, Mr. McGuire will receive a total of $5.8 million from Citi, distributed over four equal payments starting next year.

The disclosure report also revealed that Mr. McGuire received $500,000 in deferred compensation from Citi and that he also earned a minimum of $1 million in dividends, interest and capital gains from the company in 2020.

Mr. McGuire has business investments valued at anywhere from $3 million to $5.4 million; stocks and bonds in more than 130 companies valued at a minimum of $9 million and a maximum of $22 million; and owns three properties in Ohio with a minimum value of $850,000 to at least $1.3 million or more.

Mr. Bloomberg took $1 per year in salary, and Mr. McGuire said he planned to do the same.

Other candidates also reported their earnings.

Andrew Yang, the ex-2020 presidential candidate, reported earning between $677,000 and $2.5 million from book royalties, his former job as a commentator on CNN and speaking fees. Mr. Yang also expects to earn a minimum of $600,000 in future book royalties.

The former federal housing secretary Shaun Donovan reported no income; a spokesman said that he and his family “made a decision to dip into savings so that he could dedicate himself full time to running for mayor.”

Donovan gets his public funds

On Thursday, the New York City Campaign Finance Board gave Mr. Donovan’s campaign $1.5 million in matching public funds. But it had to overcome some initial hesitation before doing so.

The week before, the board withheld the funds, because it wanted to ensure that there had been no improper coordination between the former federal housing secretary’s campaign and the super PAC supporting him — which is almost entirely funded by Mr. Donovan’s father.

As of Sunday, the super PAC had reported raising $3.1 million, $3 million of it from Michael Donovan, Mr. Donovan’s father and an ad-tech executive. Super PACs are not allowed to coordinate with campaigns, and both Mr. Donovan’s super PAC and his campaign asserted there had been no coordination whatsoever. Mr. Donovan’s father, Michael, said he and his son kept their conversations to personal matters.

“We are following the law,” said the younger Mr. Donovan in an interview last week.

Coordination is notoriously difficult to prove. Even so, the campaign finance board wanted to do its due diligence and noted some displeasure even as it gave Mr. Donovan the matching funds.

“In this election cycle, several single-candidate super PACs have been established, particularly in connection with the race for mayor, and a significant level of contributions and expenditures is occurring to and by these PACs,” said board chair Frederick Schaffer in a statement. “This development poses a particular challenge to the goals of the city’s system of public campaign financing.”

Mr. Schaffer said that the board might look into amending the law and its regulations once the election is complete.

He might not be leading in the polls, but Scott M. Stringer, the city comptroller, seems to have cornered the market on support from climate activists.

Mr. Yang revealed his favorite park on Twitter and traveled to a former landfill in the Rockaways, which he said should be used for solar power generation.

Eric Adams, the Brooklyn borough president, said he would create a school focused on preparing students for green careers and would make New York “the wind power hub of the Eastern Seaboard.”

Earth Day, like any other day on Earth, was also the setting for a political scuffle.

After Mayor de Blasio announced that he would partially resurrect the city’s curbside composting program — whose demise was a byproduct of the pandemic — his former sanitation commissioner, Kathryn Garcia, issued a withering statement saying his plan would render composting a “luxury” product available only to those with the wherewithal to wade through the paperwork.

“If New York City is going to lead on climate and sustainability, we need to go bigger and bolder,” she said. “We need to make the curbside organics program mandatory, permanent, and ensure equity in its design by leaving no neighborhood behind. There is no halfway on an issue as important as the fight against climate change.”

A 13th Democrat makes the ballot

The field of 12 Democrats to appear on the ballot in the primary for mayor on June 22 had appeared to be set, but it will now be a baker’s dozen, after Joycelyn Taylor, the chief executive of a general contracting firm, earned a late spot.

Ms. Taylor, who challenged a decision by the New York City Board of Elections that she did not receive enough signatures, will appear last on the ballot after Mr. Yang. Ms. Taylor’s campaign celebrated on Twitter, saying that she was “lucky 13!”

At the same time, several candidates might not appear on the Working Families Party ballot line after there was a snafu over new filing rules during the pandemic.

The Board of Elections had rejected some notarized forms with electronic signatures that could affect Tiffany Cabán, a City Council candidate, and Brad Lander, who is running for city comptroller, among others, and it is unclear whether they might be reinstated.

A spokeswoman for Mr. Lander, Naomi Dann, said that he was “proud to be supported by the Working Families Party,” and was focused on winning the primary.