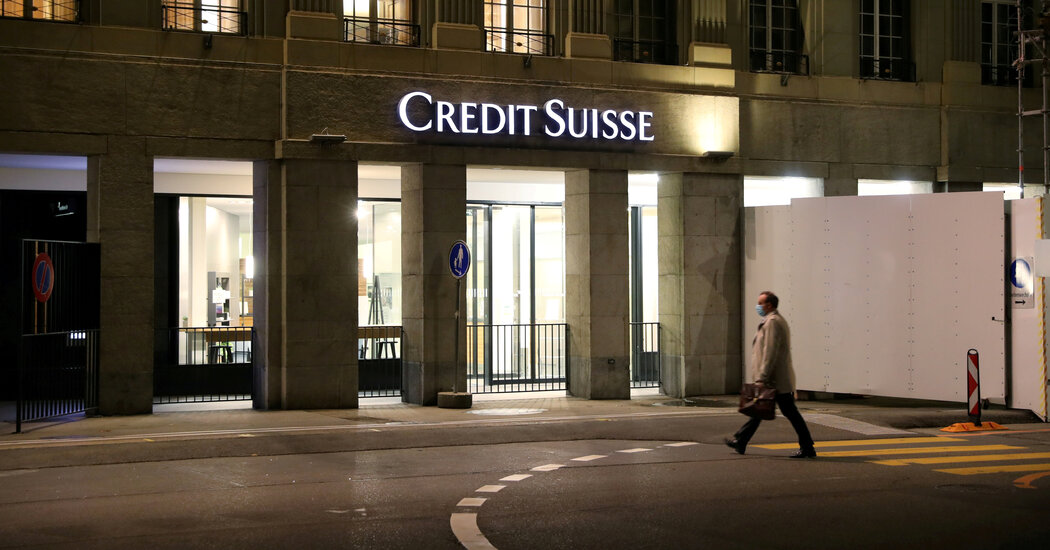 WASHINGTON — The chairman of the Senate finance panel asked Attorney General Merrick B. Garland on Tuesday for information about whether Credit Suisse continued to help rich Americans defraud the I.R.S. even after it signed a settlement agreement with the Justice Department vowing to stop the practice.

At issue is a retired professor named Dan Horsky, whom Credit Suisse helped to evade tax payments on $200 million in assets. A whistle-blower made federal prosecutors aware of Mr. Horsky’s account in the summer of 2014, and it clearly violated the terms of the settlement agreement that Credit Suisse had agreed to just weeks earlier.

But the Justice Department under the Obama and Trump administrations never punished Credit Suisse for violating the deal, even though the whistle-blower’s information led Mr. Horsky to plead guilty to tax evasion in 2016.

Senator Ron Wyden, Democrat of Oregon and chairman of the Senate Finance Committee, asked Mr. Garland for more information about the Horsky account and anything else that might show whether Credit Suisse executives made false statements to Congress, to the Justice Department and to the courts when it said it vowed to cooperate with U.S. government efforts to force the wealthiest Americans to pay their taxes.

The scrutiny around Credit Suisse’s private wealth management practices comes at a sensitive time for the bank. Last week it reported significant losses because of loans it made to a collapsed investment firm and said Switzerland’s financial regulator would investigate the bank’s risk management practices. Regulators are also investigating a spying scandal and the sale of billions of dollars’ worth of investments that were reminiscent of the shoddy subprime mortgage bonds that led to the 2008 global financial crisis.

“Public reports and federal court documents raise important questions as to whether Credit Suisse has fully complied with its plea agreement,” Mr. Wyden wrote in a letter to Mr. Garland.

“The plea agreement is expressly contingent on Credit Suisse’s performance of all of its material obligations,” Mr. Wyden added; it “specifies that if Credit Suisse should fail to fully perform its obligations, the ‘agreement not to further prosecute shall be null and void.’”

Should prosecutors decide that Credit Suisse violated its agreement with the Justice Department, the bank could be exposed to legal liability and more fines.

Mr. Wyden asked the Justice Department for a briefing on the Horsky case by May 11.

A spokesman said the Justice Department had received the letter, but had no immediate comment. A Credit Suisse spokeswoman said that since the 2014 settlement, the company “has cooperated fully with U.S. authorities and will continue to do so.”

Mr. Wyden also asked that the department help him verify whether Credit Suisse executives provided false statements to the Senate in February 2014, when they testified about whether the bank had stopped helping wealthy Americans evade taxes.

Brady Dougan, then Credit Suisse’s chief executive, told senators that the bank had worked to be “100 percent compliant with the requirements around the U.S. taxpayer,” Mr. Wyden wrote. At the same hearing, the bank’s general counsel, Romeo Cerutti, testified that Credit Suisse was “really looking at whether someone is a U.S. person” in order to root out Americans who were hiding their wealth from the I.R.S.

For nearly 15 years, Republicans and Democrats have taken part in a well-publicized campaign to weed out tax dodgers with Swiss bank accounts, focusing on UBS and Credit Suisse, both based in Zurich.

When the Credit Suisse executives testified in 2014, they were in the midst of negotiations with the Justice Department about a settlement over the bank’s treatment of U.S. tax dodgers.

The two sides signed the deal in May 2014, in which Credit Suisse pleaded guilty to helping some American clients evade taxes and was fined a total of $2.6 billion. But it avoided even higher fines because it vowed to federal prosecutors that it had stopped the practice, would close “any and all accounts of recalcitrant account holders,” and would help the U.S. pursue other criminal investigations.

The guilty plea and steep fine were rare in 2014, and it was the first time in more than 20 years that a lender of its size had admitted wrongdoing in an American court.

But a whistle-blower emerged in July that year and told officials at the tax division of the Justice Department and federal prosecutors who had worked on the case about an account that belonged to Mr. Horsky, a retired business professor who lived in Rochester, N.Y., and amassed much of his fortune by investing in start-up companies in the 1990s, according to news accounts.

In September 2014, when Credit Suisse appeared in court to plead guilty, the judge asked both the bank and prosecutors whether they had any information that would affect the settlement agreement. Both sides said no.

But the whistle-blower tip led prosecutors to discover that Mr. Horsky had hidden a $200 million fortune with the help of Credit Suisse bankers using offshore shell companies, court documents show. The arrangement lasted for months after the bank signed its plea deal.

As part of the scheme to hide Mr. Horsky’s wealth, bankers put it under the name of one of Mr. Horsky’s relatives who lived overseas. When an account of that size changes hands, it is subject to enhanced due diligence, which includes notifying bank executives of the change.

Mr. Wyden also sent a letter to Credit Suisse on Tuesday seeking information about when the Justice Department told Credit Suisse about the Horsky account. He asked whether the bank notified the government of the account before the whistle-blower came forward and, if not, whether that was the result of poor internal controls or “a willful decision not to report the existence of these accounts to U.S. government entities.”

It is unclear why the Justice Department did not notify the court of the whistle-blower claim and change the terms of its settlement. The department would have had the authority to review the Credit Suisse case for possible breaches and further prosecute the bank.