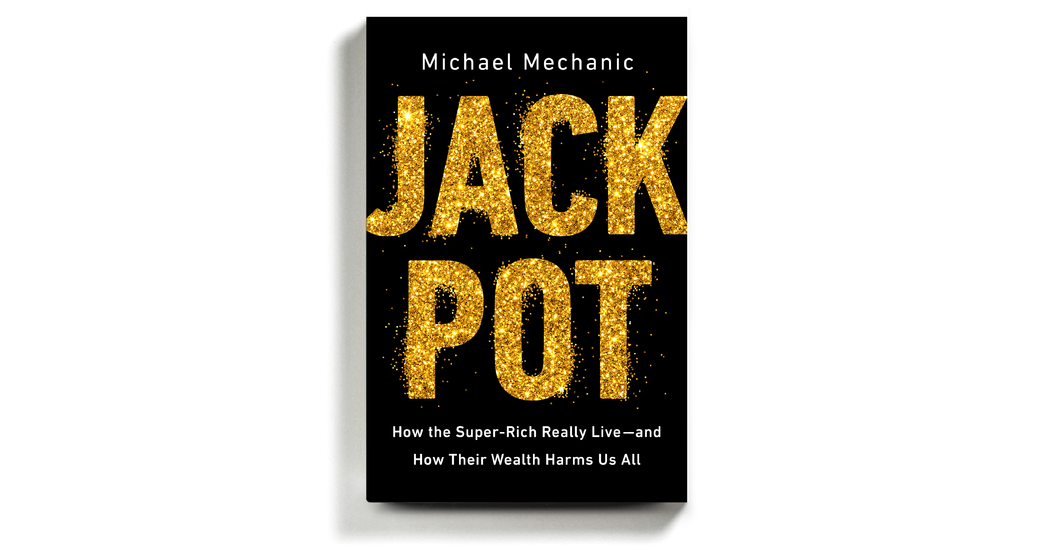 If you have ever wondered how the ultra-rich live, it turns out — are you ready for it? — they live pretty well. Even in the early, chaotic days of the pandemic, they managed as a class to thrive: hunkered down in the Hamptons while the values of their stock portfolios soared, able to procure precious Covid tests that were unavailable to the unmoneyed and unconnected.

But Michael Mechanic wants us to see how being rich isn’t the life of carefree ease that it’s made out to be. Part of his argument in “Jackpot” is that such inordinate wealth “harms us all” — including the ultra-rich themselves, even if their reality is so remote from ours that they wouldn’t know what “us” was if it came brandishing a pitchfork.

The prospect of being “blissfully unshackled” from ordinary economic constraints sounds so liberating that “seldom do we interrupt our reveries to contemplate the social, psychological and societal complications that come with great affluence.” This gave me pause: Whose responsibility is it to contemplate this idea, and is it really all that counterintuitive? Isn’t it the plot of the New Testament?

But Mechanic, a senior editor at Mother Jones, shows that as the topmost sliver of the 1 percent has peeled off from the rest of the population, resentment of their situation has escalated while comprehension has declined. I sometimes wasn’t so sure about Mechanic’s insistence that we need to extend any special empathy to ultra-rich people, who seem more than capable of taking care of themselves. But as this readable book progressed, I appreciated his attempt to pull off a delicate balancing act: serving up the digestible morality tale of people spoiling themselves truly rotten before he digs into the fibrous, sociological knot of the system as a whole.

Mechanic chose his title deliberately, being susceptible himself to the lure of hitting it big. He recalls purchasing lottery tickets when he was making a decent salary working for The Industry Standard, the magazine of the dot-com boom, in the late ’90s. He was indulging in the get-rich-quick fantasies of the time. There was the recent college grad who used a trace amount of the $30 million he acquired (“earned” doesn’t seem like quite the right word) after Netscape went public to fill his bathtub with Silly Putty. “A lottery jackpot is so raw, so disconnected from anything real,” Mechanic writes. He chalks up such windfalls to “dumb luck,” though it’s clear that many of the rich people he describes think they’re very smart.

Yes, Mechanic allows, there are individuals who innovate and take on enormous risks and put in start-up hours for years and perhaps deserve to earn more than others. But economic inequality is now so extreme, he suggests, that there’s no way to explain it convincingly in terms of the so-called meritocracy that gets trotted out whenever panicked tycoons hear the words “taxes” and “redistribution.” Mechanic questions the morality of a society that allows individuals to accumulate billions of dollars for themselves. Citing Anand Giridharadas’s 2018 book “Winners Take All,” Mechanic says that relying on this billionaire class for its enormous philanthropic outlays is a sign that something has gone terribly wrong.

The first third of “Jackpot” is devoted to the goodies that money can buy: a $400,000 car, a $21,000 bathtub, a bespoke watch so intricate that its price is a secret. At times the parade of opulence is so garish that I started feeling numb. Mechanic might say that I, like the people who can actually afford such things, had hit my “satiation point.” A psychologist who specializes in the mental health of the rich says that they are actually at a disadvantage when it comes to happiness. The less moneyed among us can still hold out the hope, even if it gets constantly frustrated, that more money would solve all our problems, while “his clients don’t have that fallacy to cling to.”

Still, as Mechanic concedes, those clients can at least afford to address their mental health issues. They can pay for concierge health care in a country where even basic, affordable health care isn’t a given. They can easily send their children to the priciest private schools, where minuscule class sizes ensure “extensive nurturing.” I sometimes sensed that Mechanic, despite his generous talk about the need for “empathizing with the pain of fortunate people,” felt what some of his readers might: the stirrings of class rage.

One thing that makes it hard for a reader to do much empathizing is that Mechanic ended up talking to only a handful of these “fortunate people.” It wasn’t for lack of trying. As he explains, such people are extremely secretive about their wealth for all kinds of reasons, including an awareness that being candid about their lives would make them possible targets of not only theft and ransom demands but also envy — and perhaps provoke in them attendant feelings of shame. Consequently, he mostly interviewed those who feel uncomfortable with their extreme wealth and have devoted themselves to causes like a more equitable tax code.

Besides, empathy for high-net-worth individuals would seem to be largely beside the point, since what Mechanic arrives at in the last third of “Jackpot” is an exploration of how structural so many problems are. That the ultra-wealthy skew overwhelmingly white and male indicates that something systemic is afoot.

Mechanic offers such a fluent survey of the vast literature on historical inequality — indicating that he’s not only read that literature but understood its implications — that I was surprised by his upbeat ending, when he suggests that transformative change could happen if only more rich people had a change of heart.

“This needn’t be a French-style Revolution, one the wealthy must fear,” he writes, “but rather a revolution in which they can play a constructive role, picking up a pitchfork with the rest and using it to bale a neighbor’s hay in exchange for camaraderie and a hearty meal.” Considering that the sumptuous lifestyles he has described don’t even entail cleaning one’s own bathroom, let alone baling anybody’s hay, it’s unclear how this is going to work.