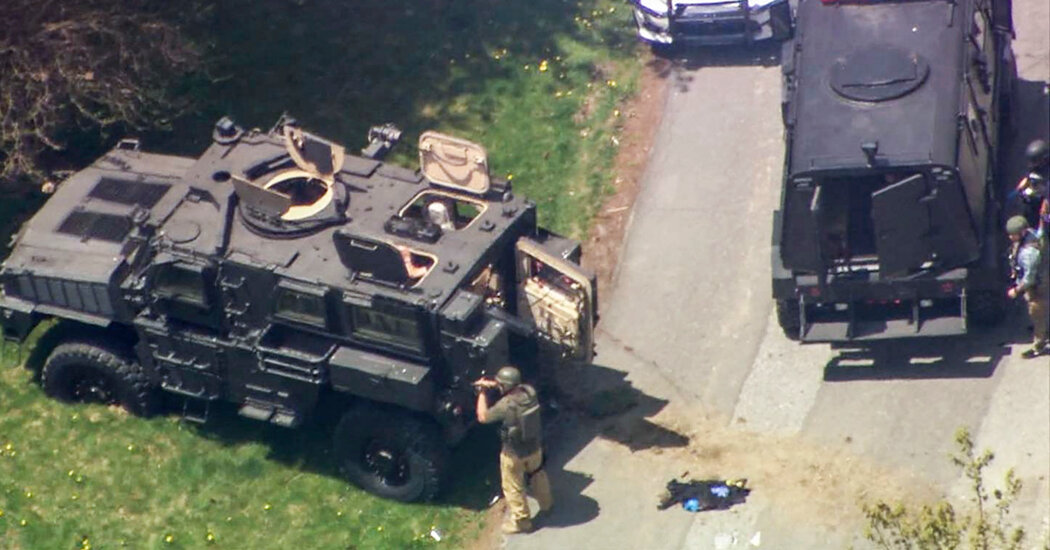 Two sheriff’s deputies were among four people who were killed in a 13-hour standoff in Boone, N.C., that the authorities said started on Wednesday morning when they were called to the home of a man who had not shown up for work.

Deputies from the Watauga County Sheriff’s Office arrived at a house at 9:44 a.m. on Wednesday after the homeowner’s employer called to report that the person had not come to work or answered any telephone calls, the Sheriff’s Office said.

When the deputies went inside, two of them were shot as they descended the basement steps, said Sheriff Len Hagaman.

Sheriff Hagaman told reporters it was fair to say his deputies had been ambushed by the gunman, 32, who also killed his mother and stepfather. The person who called the Sheriff’s Office for a well-being check was the stepfather’s employer, Sheriff Hagaman said.

The sheriff said that the gunman may have had plans to target members of the public and that his office had been warned that he had “a lot of guns.”

The Sheriff’s Office said the standoff ended at about 11 p.m. on Wednesday. The North Carolina State Bureau of Investigation confirmed on Thursday that the gunman was dead, but did not release his name or say how he died.

Sheriff Hagaman said that the gunman appeared to have a plan for “taking people out.” He did not describe other details of that plan.

In recent days, the authorities had received calls from people concerned that the gunman may be dangerous, Sheriff Hagaman said.

“They were just kind of giving us a heads up, ‘This is what he’s thinking about doing,’” he said. The authorities did not know he was in the house when they arrived, Sheriff Hagaman said.

One of the deputies, Sgt. Chris Ward, died after being flown to Johnson City Medical Center. The other, Logan Fox, a K-9 deputy, died at the scene, the sheriff said. The identities of the gunman’s mother and stepfather were not immediately released.

An officer with the Boone Police Department was also shot, the authorities said, but was uninjured because he was wearing protective equipment.

“This is an incredibly tragic situation and our thoughts and prayers are with everyone involved as well as their families and our community,” Sheriff Hagaman said in a statement. “I greatly appreciate the tremendous support we are receiving from law enforcement agencies across the region and the state.”

The standoff drew a large law enforcement response from more than a dozen organizations, including other sheriff’s offices, police departments and the North Carolina State Bureau of Investigation.

During the confrontation, the gunman barricaded himself inside the house and periodically fired at the officers, the authorities said.

John Barbour, a retired minister who said he lives a quarter of a mile away from the house, said he received a call from law enforcement officials on Wednesday morning telling him to stay inside his house.

“They said please lock your door, lock your windows, because there is a crime in progress,” he said. Mr. Barbour, 67, described the neighborhood as quiet, peaceful and middle-class.

“People are very friendly. They say hello and talk to you,” he said. “So it’s surprising when something like this can happen in this neighborhood.”

Mr. Barbour said he was horrified and saddened by the deaths of the officers and the people inside the house.

“This is happening too often,” he said.