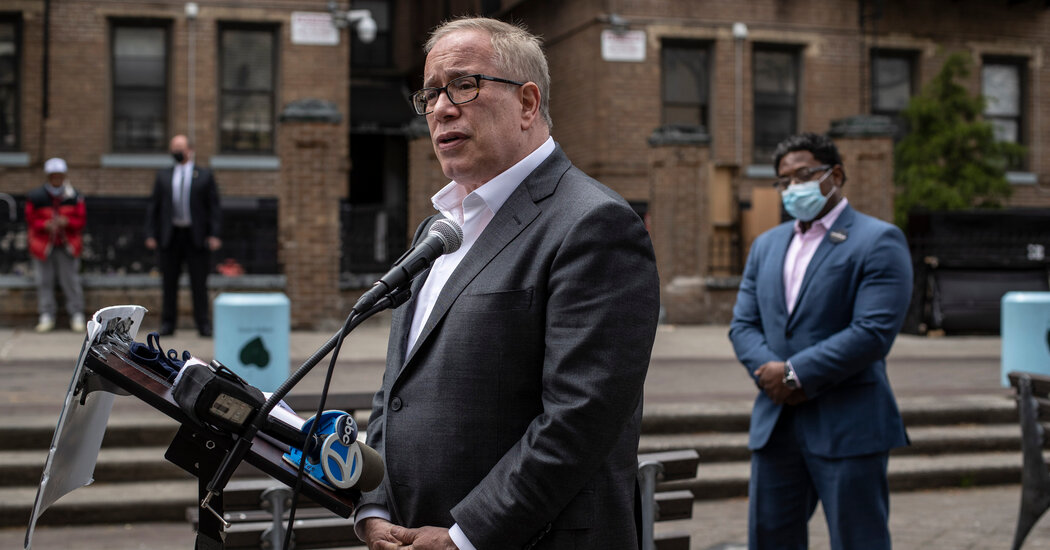 The withdrawal of the endorsements dealt seismic blows to Mr. Stringer, and significantly complicated his path forward in the mayor’s race in New York City.

Representative Jamaal Bowman, a New York Democrat; State Senators Alessandra Biaggi, Julia Salazar and Gustavo Rivera and Assemblywomen Yuh-Line Niou and Catalina Cruz — many of whom had been at Mr. Stringer’s campaign announcement and had served as prominent surrogates for his mayoral bid — issued a joint statement.

“We are rescinding our endorsement of Scott Stringer’s mayoral campaign,” it said simply.

Mr. Stringer, the city comptroller, has sought to be the left-wing standard-bearer in the high-stakes mayoral contest, and he had gained momentum in recent weeks, in part because of the backing of the Working Families Party, which his allies had seen as a turning point in the race. But the sexual misconduct accusation from a former campaign worker, which came to light this week, has sparked an outcry, placing mounting political pressure on the candidate, who has vigorously denied wrongdoing.

The woman, Jean Kim, now a political lobbyist, accused Mr. Stringer of sexually assaulting her when she worked on his 2001 race for public advocate. She said that Mr. Stringer, who was then a state assemblyman, had groped her, made other unwanted sexual overtures and told her to keep those actions quiet. Mr. Stringer has strenuously denied those claims, saying that they had a consensual relationship that stretched over a few months.

But he has faced increasing pressure this week, losing the endorsement of several prominent lawmakers who had supported his campaign within a day of Ms. Kim’s public statement.

Jimmy Van Bramer, a Queens councilman who less than a week ago was giving impassioned remarks at a rally for Mr. Stringer, wrote on Twitter on Friday that he no longer backed his candidacy.

The fresh defections from the lawmakers may land as especially personal rebukes for Mr. Stringer, who had cultivated relationships with a number of those Democrats for years, serving as a mentor to several of them and endorsing them early in competitive campaigns. In turn, he relied on their endorsements to make the case that he, a career politician with deep ties to New York political institutions, could also be the candidate of the activist left.

Their departures unquestionably weaken Mr. Stringer’s candidacy, and some on the left fear that Mr. Stringer’s stumbles will help Andrew Yang, the former presidential candidate, and Eric Adams, the Brooklyn borough president, two more centrist contenders in the race. Maya Wiley, a former counsel to Mayor Bill de Blasio, has been competing for some of the same deeply progressive voters Mr. Stringer has sought, and some political observers see an opening for her as well.

A person familiar with the Working Families Party’s decision said its members felt Mr. Stringer was dismissive toward Ms. Kim and her account.

“We approached this moment with the deliberate reflection, discussion, and input from members and leaders across the party that it required,” Sochie Nnaemeka, the party’s state director, said in a statement. “Jean Kim shared her experience of sexual assault and Scott Stringer failed to acknowledge and consider his responsibility for that harm.”

Mr. Stringer, who has stressed a zero-tolerance policy for sexual harassment and has said he believes women deserve to be heard and treated respectfully, issued a pre-emptive statement earlier Friday afternoon.

“I understand that this is a difficult moment for my supporters, and I know that some of them will feel compelled to withdraw their endorsement of my candidacy,” he said. “This campaign was always going to be about the people. I’ve received a lot of support on campaign stops over the last two days, and I’m going to be campaigning in every neighborhood, in every borough for the next two months.”

Certainly, Mr. Stringer remains well funded, and so far still maintains support from major unions including the United Federation of Teachers, as well as from officials like Representative Jerrold Nadler.

The Working Families Party had endorsed Dianne Morales, a former nonprofit executive and perhaps the most left-wing candidate in the race, as its second choice, and Ms. Wiley as its third choice ahead of the city’s ranked-choice mayoral election on June 22.

“We are enthusiastically reiterating support for our other endorsed candidates, Dianne Morales and Maya Wiley,” the statement said. “The New York Working Families Party will be forging forward in the critical weeks ahead to ensure one of these fearless, bold women is the next Mayor of New York.”

Party leaders had a series of tense calls over whether to rescind Mr. Stringer’s endorsement, and ultimately the decision to do so came down to three factors, according to a member of the organization who was not authorized to discuss the deliberations.

There was a sense that Mr. Stringer was too defensive in his response to the allegations, and did not acknowledge the power imbalance he had with Ms. Kim; members felt he could no longer win the mayor’s race; and there was a fear that if they did not rescind Mr. Stringer’s endorsement, women would no longer feel supported within the organization.

Whether Ms. Morales would now be treated as the first choice of the organization was not clear Friday afternoon.

Sunrise NYC, the New York chapter of the Sunrise Movement, a youth-driven organization focused on climate, also rescinded its endorsement of Mr. Stringer; it had previously co-endorsed Mr. Stringer and Ms. Morales.

“As of today,” the organization wrote on Twitter, “our sole endorsement for NYC Mayor is @Dianne4NYC.”