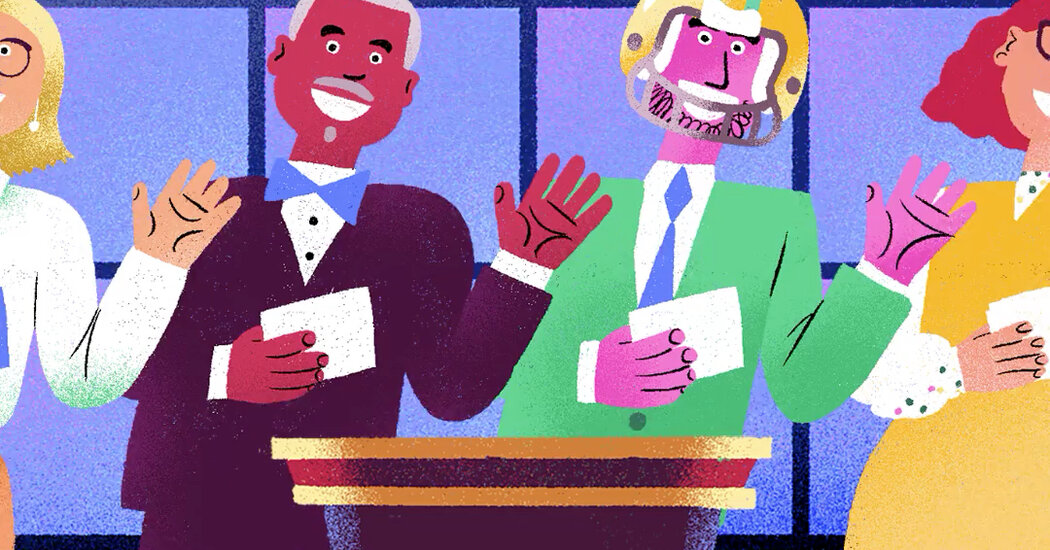 One of the disappointments of the “Jeopardy!” guest host pool is its overreliance on midcareer television journalists. In addition to Couric, Cooper and Whitaker, the show will feature the “Good Morning America” anchors Robin Roberts and George Stephanopoulos and the “Today” show anchor Savannah Guthrie. There is overlap between “Jeopardy!” host and television journalist — both jobs require a telegenic presence and fleet-footed interview skills — but “Jeopardy!” is not the news, and it should not feel like it. The “Jeopardy!” viewing experience includes absorbing garish local news teasers about some poor neighbor being murdered in a bizarre fashion during the commercial breaks, and when the show resumes, it should feel aloof to the whims of the day’s events, dedicated instead to the arcane. Once Anderson Cooper bounded onto stage with his sweep of silver hair and 24-hour cable news energy, the distinction collapsed.

Katie Couric, at least, leaned on her morning news chops to spin the show in a fresh direction. Couric was unapologetically on the side of the players; she was so encouraging, she seemed disappointed that not everybody could win. Her style helped illuminate the secret behind Trebek’s own cool demeanor: If he sometimes seemed hostile to the contestants, it was because he reserved his ultimate respect for the show, with all its quirks (the answer-questions, the puns, the unabashed bias for the liberal arts). He made rigor charming: Born in Canada, Trebek enforced the proper pronunciation of French words and tsk-tsked the lack of attention to the country’s geography. Contestants come and go; the host of “Jeopardy!” should be on the side of the clues.

One crucial category of host that has yet to make its “Jeopardy!” debut is the celebrity nerd. Later this month, Mayim Bialik, the teen star of “Blossom” turned neuroscientist, will take the podium. In July, following a groundswell of online support, LeVar Burton, whose tenures on “Star Trek: The Next Generation” and “Reading Rainbow” have elevated him into geek royalty, will take his turn. In her book “Answers in the Form of Questions,” Claire McNear writes that “Jeopardy!” represents the height of “nerdy validation,” so it feels natural for a member of this social archetype to make an appearance. What’s more surprising is the success of a host plucked from the other side of the high school cafeteria: a jock.

When Aaron Rodgers, the Green Bay Packers quarterback and legitimate “Jeopardy!” obsessive took the stage, I eyed him warily. Like Oz, he appeared to be an interloper from another television genre. Then, in one of his early games, Rodgers read a $400 clue (“In the 1960s these Midwesterners earned 5 NFL Championship trophies”), and when no one buzzed in with the correct answer — “Who are the Green Bay Packers?” — he extended his arms in this charmingly deflated manner, and I was disarmed.

When Cooper wedged a joke into the show, it seemed opportunistic; it felt like he was trying to outwit the game format itself. But something about Rodgers’ own quirks felt humbly earned. Though each of the guest hosts genuflected to their privileged position, Rodgers radiated a golden-retriever quality that cast an inviting energy over the proceedings. Some of Rodgers’ appeal is attributable to his understated persona, but it also feels related to his status: Rodgers is truly excellent at football — he was named MVP this past season, at the age of 37 — and there is something endearing about his interest in becoming excellent at facts, too.

I am not excellent at “Jeopardy!” The trivia-themed insurance ads that air during commercial breaks are more my speed; I proudly identify as a GEICO “Jeopardy!” champion. Watching the show doesn’t make me feel smart, but it does make me feel included in its wider intellectual project. There is something incredibly soothing about being swept up, night after night, in its font of information. Trebek’s successor will not only become the keeper of the clues but a cultural defender of facts. It’s interesting that the standout stand-ins so far have been, on the one hand, the most beloved champion in the show’s history, and, on the other, someone totally out of left field. If Jennings represents the show’s pursuit of excellence, Rodgers exemplifies its democratic undercurrent: Everyone can play along at home.