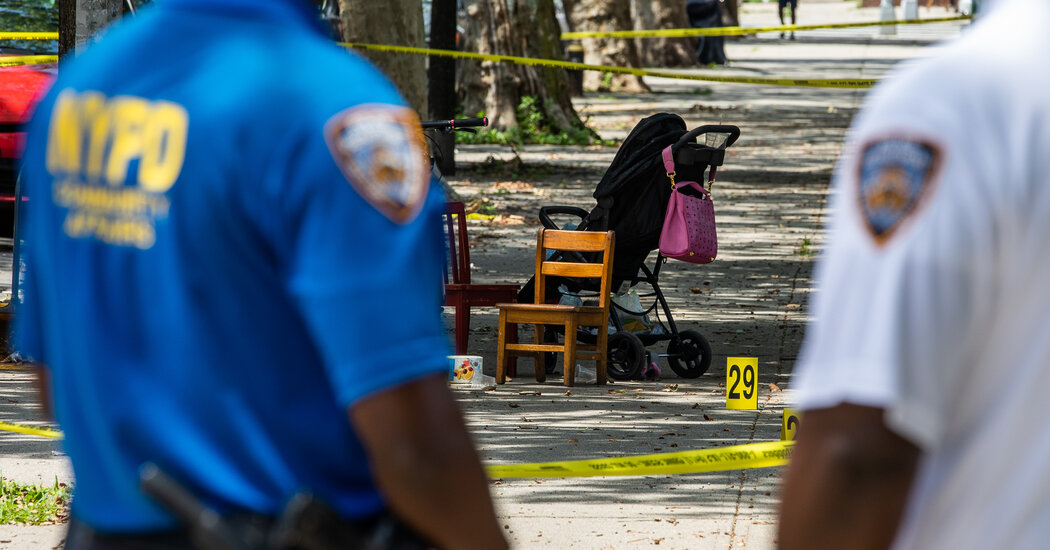 It was a heart-rending killing in a summer of overwhelming grief: Davell Gardner, a 1-year-old boy sitting in his stroller last July during a nighttime barbecue in Brooklyn, was shot in the stomach after two gunmen hopped out of an SUV and opened fire on the gathering.

Davell died at 2:30 the next morning and became the city’s youngest gun violence victim last year, two months shy of his second birthday. The shooting, captured on surveillance video, jolted a city already beaten down by the pandemic and roiled by unrest over police brutality.

On Thursday, 10 months later, police announced charges against two men in the killing: an accused gunman who is also charged in connection with two other murders, and a driver.

The accused gunman, Dashawn Austin, 25, was among 18 young men facing murder, conspiracy and weapons charges in a 63-count indictment unsealed Thursday morning in Brooklyn, which detailed the violent gang feud behind the killings.

Mr. Austin and the other defendants are members of the Hoolies gang, who have been engaged in a bloody rivalry with the 900 gang in Bedford-Stuyvesant, according to the Brooklyn district attorney’s office. The conflict has left at least six people dead, 14 wounded and many others fearing for their safety in the neighborhood since 2018. Nineteen members of the 900 gang were charged in January.

In a major breakthrough, the police obtained Hoolies group chats on Telegram, an encrypted messaging app, where members plotted shootings and alerted each other about rivals in the neighborhood.

Investigators also pieced together hours of surveillance footage, including identifying unique items of clothing that members wore, and gathered intelligence around the Hoolies headquarters in Bedford-Stuyvesant.

At a news conference on Thursday, Eric Gonzalez, the Brooklyn district attorney, said he had spoken with Davell’s parents before the charges were announced.

“I hope today’s indictment and accountability will be a small measure of solace for the family as they seek justice,” he said.

Police officials believed Thursday’s takedown targeted the leaders of the Hoolies, including some founding members, but they said the gang still had dozens of recruits. Prosecutors are working with community advocates to address concerns about the arrests potentially unleashing a violent succession battle among younger Hoolies to fill the leadership void.

Much of the violence occurred over the last year amid a historic surge in shootings that has left New York and many other cities reeling. The Police Department recorded 1,531 shootings in 2020 — almost double the 777 recorded in 2019 — and Davell was one of 468 people killed, the most since 2011.

Shootings have continued their sharp rise this year, jumping to 416 through May 2, from 227 over the same period last year, according to police statistics — an 83 percent increase. Murders have increased slightly. The violence has become a key issue in the mayor’s race as the city struggles to mount an effective response.

The takedown was one of two gang operations announced on Thursday, as federal prosecutors in Manhattan brought racketeering and weapons charges against seven people believed to be members and associates of the 800 YGz in the Bronx.

The city is leaning into a strategy that has been criticized by lawyers and researchers who say it allows police and prosecutors to claim credit for addressing crime by exaggerating the role of gangs and using aggressive policing practices that sweep up large numbers of young, Black and Hispanic men.

Babe Howell, a law professor at the City University of New York, has closely studied four indictments charging a total of about 200 people since 2014. She said the cases show how law enforcement officials often highlight an “exaggerated narrative that holds whole groups responsible for the conduct of individuals.”

“What we see is cases that are solved basically using cooperators who are facing sentences based on conspiracy charges that could mean 20 or more years,” she added. “It’s so worrisome because there’s no other world where we bring in all your friends for something you did three years ago.”

The young men charged in the Hoolies and 900 gang takedowns, who range in age from 16 to 33, dueled through rap songs posted on YouTube and in tit-for-tat shootings, according to prosecutors. Many of the shootings involved victims who were innocent bystanders or were mistakenly believed to be rival gang members.

The feud escalated on the afternoon of Dec. 4, 2018, when the Hoolies leader, Jahlil Grant, 21, was shot in the neck and killed in front of the Roosevelt Houses, where the gang operates. Investigators believe the 900 gang was behind the shooting.

Eight hours later, prosecutors said, the Hoolies retaliated and killed a man walking in front of the Sumner Houses nearby — 900 Gang territory. The victim, Tyree Walker, 35, was not involved in the feud between the Hoolies and the 900. He was shot in the back of the head by assassins he never saw, the police said at the time, and left behind a wife and four children.

Police and prosecutors had been investigating the gangs’ feud for more than a year by the time Davell was killed, according to earlier indictments unsealed in January.

Mr. Gonzalez, the Brooklyn district attorney, said the investigation of Davell’s murder was delayed in part by the coronavirus pandemic, which made it more difficult to impanel grand jurors who could sit for several weeks to hear the prosecutors’ evidence and indict the case.

Davell was one of nine children younger than 3 killed last year, but he was the only victim of gun violence among them. On what would have been his second birthday in September, his father held a memorial decorated with golden paper footballs, a sport he said the boy showed an early love for.

On Thursday, a shrine including stuffed toys and a picture of Davell sat at the base of a tree near the park where he was killed.

Alvin Gordon, who lives across the hall from Davell’s extended family, said he had held Davell earlier on the day he was shot. The block has become calmer since Davell’s death, Mr. Gordon said.

“Everybody banded together because everybody loved that little boy,” he said.

Davell’s paternal grandmother, Samantha Gardner, said in an interview last year that she hoped for justice, but that it would not be enough to handle the pain of the boy’s death.

Mr. Austin was charged in the killing along with his driver, Akeem Artis, 24. A police official who spoke with The Times last year said investigators believed the second gunman was an 18-year-old who has been charged with another murder. The teenager has not been charged in Davell’s case.

Mr. Austin and another man, Jayquan Lane, 28, were arrested last year and charged with killing Janile Whitted, a rival who worked as a bouncer at a local strip club, the Amour Cabaret on Nostrand Avenue. Mr. Whitted was believed to be a member of the Pop Out Boyz, a Bloods subset whose members were charged with running a credit card and identity theft ring in 2016.

Mr. Austin was also arrested and charged with robbery in 2009, gun possession in 2011 and public drinking in 2018. It is unclear how the cases were resolved.

Mr. Lane, who was also named in the indictment on Thursday, was previously arrested in connection with a shooting on May 3, 2019, and charged with attempted murder. He had pleaded guilty to criminal forgery charges in 2018 and was serving a sentence of three years of probation.

Mr. Artis was arrested in 2019 in Connecticut on larceny and identity theft charges. The charges indicate that he was found with a payment card that did not belong to him and may have been counterfeit. It was not immediately clear how the case was resolved.