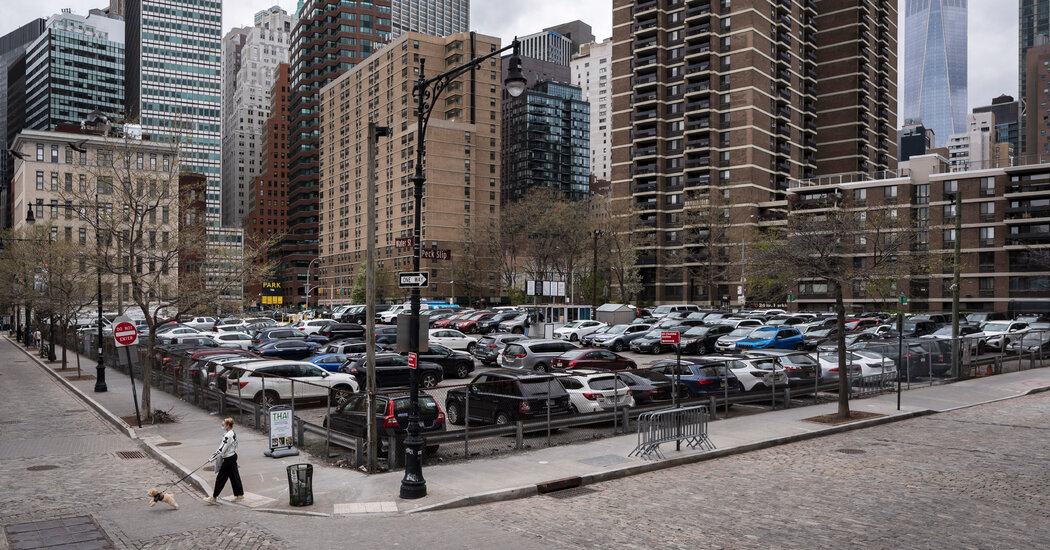 For more than 40 years, real estate developers have been intoxicated by an asphalt trapezoid at 250 Water Street. It has East River proximity, high visibility from the Brooklyn Bridge and the Brooklyn Heights promenade and — as far as open space in downtown Manhattan goes — it is big: nearly 50,000 square feet. But this particular lot, whose spots ran about $20 an hour on weekdays, is in the South Street Seaport Historic District, which means that anyone seeking to build even a toolshed there must first secure permission from the Landmarks Preservation Commission.

Though that might have deterred some developers, the Howard Hughes Corporation nevertheless paid about $180 million for the lot in 2018. Howard Hughes had made several building proposals to the commission, culminating this week with a plan for a 324-foot-tall mixed-use luxury tower. Though zoning laws prohibit any building higher than 120 feet in the South Street Seaport district, Howard Hughes has cleared the first hurdle toward fulfilling its dream of a skyscraper taller than the Brooklyn Bridge in an important, and visible, part of Lower Manhattan.

After years of grass-roots meetings and protests, community board hearings, more than 1,000 letters (pro and con) and an 8,500-signature petition, it appears that 250 Water — also known as Lot 1, Block 98 — will finally cease to be a parking lot.

On Tuesday, the Landmarks Preservation Commission voted 6-2 to issue what is called a certificate of appropriateness, a crucial first step in Howard Hughes’s march to city approval. Sarah Carroll, the chair of the commission, said the only loss of historic fabric was “of a parking lot that is an intrusion in the historic district.”

“An approval here would not set a precedent for any other site in any other historic district,” she added.

Commissioner John Gustafsson, one of the two who voted against the certificate, said: “There are literally thousands of appropriate alternatives. We are not being offered one of them.” He added that he realized he was in “the unenviable position” of having to choose between a tower and an “obviously detrimental parking lot.”

No one on either side thinks a parking lot is a good use of space. But if a tower goes up in one of the most important historic districts of the city, critics argue, it could set a precedent for other developers seeking to go tall in other districts, forever altering low-scale streetscapes.

One of the most vocal proponents of the development is at first glance one of the most unlikely: the president and chief executive of the South Street Seaport Museum, Capt. Jonathan Boulware. He is a historic ships expert whose museum honors the birthplace of New York and its rise as a port city. Captain Boulware supports the project in part because Hughes had pledged a gift of as much as $50 million to the museum as part of its plan.

The gift, Captain Boulware said, would give the museum stability for the first time in its 50 years and prevent the museum from folding. He hopes to reopen soon after decades of financial struggle.

Two other surprising allies were Councilwoman Margaret Chin, who represents the area, and Manhattan’s borough president, Gale Brewer, both of whom will serve important roles in getting the project approved by the city. In 2008, Ms. Chin, who was then running for City Council, opposed another developer’s project, saying, “A 40-story tower has no place in the Seaport,” while Ms. Brewer said of a 2014 Hughes plan, “Building a tower at the South Street Seaport is like building a tower at Colonial Williamsburg.”

Their support for the Water Street project was largely based on the museum gift and the agreement that the tower would include about 70 units for low-income tenants.

Those disappointed by the decision make up a broad coalition: historic preservationists, those concerned about climate change (250 Water is in the highest-risk flood zone in Manhattan) and Seaport residents concerned about noise, sewage and losing their views.

“I am completely disappointed in L.P.C.’s decision to grant this enormously out-of-scale, out-of-character project the green light,” Megan Malvern said of the Landmarks Preservation Commission vote. Ms. Malvern, a mother at the public Peck Slip School across the street from the lot, is a founder of the opposition group Children First.

Ms. Malvern points out that the lot has been home to three mercury thermometer factories, a chemical company and a gas station. It has elemental mercury beneath it, which, when vaporized, can cause brain damage and is particularly dangerous to children. Howard Hughes plans to start remediation next year through the state’s voluntary Brownfield Cleanup Program.

“I’m sickened,” Ms. Malvern said. “Parents are scared to send their kids back this fall. We’ve already lost so much from Covid. We supported our city, our neighbors and our local shops, but when we needed support the city sacrificed us to a greedy real-estate developer that specializes in speculative investment deals.”

Also disappointed was Jonathan Gardenhire, a resident of the New York City Housing Authority’s Smith Houses nearby and a Democratic district leader. “I am a staunch supporter of affordable housing,” he said, “but it needs to be more substantial than 70 units.”

In the end, though, Mr. Gardenhire, Ms. Malvern and their allies were faced with a monumental task: defending the sanctity of a landmarked parking lot against a building, however tall, that could save a beloved local museum and offer affordable housing.

The story of how a parking lot came to exert such extraordinary power involves raw commerce, speculation and sky. In 1966 the City Planning Commission issued the Lower Manhattan Plan to encourage residential and commercial development south of Canal Street. The next year, the charter of the South Street Seaport Museum was established, and in a complicated deal, the city appointed the museum the economic developer of a portion of the area: The museum would preserve some blocks and develop others in cooperation with banks and the city.

In 1977, the Landmarks Preservation Commission created the South Street Seaport Historic District. It was the first such district in Lower Manhattan, comprising 10 blocks of squat 18th- and 19th-century buildings, three piers, several empty parcels — and a parking garage and gas station that had been on Block 98 since the 1920s.

Block 98 was now part of a historic district, but 1977 zoning laws still allowed potential developers to build skyscrapers there pending Landmarks approval. Between 1983 and 1996, the Milstein family of developers, who bought the lot in 1979, made seven proposals to Landmarks for commercial and residential projects. All but one were rejected or withdrawn: an 11-story office building in 1991. But the economy was uncertain, and the Milsteins didn’t build.

Then, in 2003, an alliance of community members and local developers persuaded the City Council, which included Bill de Blasio and Ms. Brewer, to vote unanimously to “downzone” the historic district. From then on, no building in the district could be higher than 120 feet.

In recent years, under the billionaire investor Bill Ackman, Howard Hughes has gained control over much of the Seaport area as the leaseholder of city-owned properties. Naturally, Hughes (which is based in Texas and is known for developing planned communities) has butted heads with residents; after it proposed a 50-story hotel and condo development on the Seaport waterfront just outside the historic district, opponents helped to squelch it. One concept for the roof on Hughes’s Pier 17 mall was for river-facing public space, but that area has been used largely for private, ticketed events, including concerts that have drawn noise complaints.

The company’s antagonists have argued that they are not against development; they are against inappropriate development. Some live in Southbridge Towers, a complex of four towers and five six-story buildings across from 250 Water that used to be designated as middle income under the Mitchell-Lama program. Its privatization in 2015 has enabled Hughes supporters to dismiss residents as hypocritical, concerned only about obstructed views from now-market-rate apartments. Elaine Kennedy, a retired physical therapist who has lived in Southbridge for 46 years, and whose Brooklyn Bridge view would be unaffected by the 250 Water building, said residents had “been actively involved in this fight to keep the district low-scale since back when we were Mitchell-Lama.”

Last November, Ms. Kennedy and other members of the opposition group she helped found, Seaport Coalition, hatched their own plan for 250 Water at the governor and borough president offices’ behest as part of the planning review process. The group called it Resiliency Park. It would include a storm-water detention system to guard against storm surges, as well as rooftop botanical gardens. Unfortunately, its distinguishing feature was a municipal tow pound that would be relocated from Midtown.

The Resiliency Park idea was greeted with gleeful mockery by Howard Hughes allies like Catherine McVay Hughes, a museum board member who was the Community Board 1 chair during 9/11. “A tow pound was never a community amenity,” she said.

“Catherine McVay Hughes clearly doesn’t know what the community needs or what the plan entailed,” said Ms. Malvern, who is also a Seaport Coalition member. “A tow pound is capable of surviving a massive flood.”

But a tow pound is off the table for now. With Landmarks having approved a certificate of appropriateness, Howard Hughes’s plan will enter the city’s review process.

“We are looking at litigation and working with an attorney to that end,” Ms. Malvern said. If they can delay city approval past December, a new City Council member, borough president or mayor might halt the development.

“Families never would have gone to the school if they knew a gross high-rise was going to go up,” Ms. Malvern said. “It was a safe place and idyllic elementary school, where kids would be learning about the Seaport, cobblestone streets and the formation of the city.”

The question is what this week’s Landmarks decision will mean for other developers seeking to build skyscrapers in historic districts. “The fact is that the political forces at play in N.Y.C. are placing preservation pretty low on the scale of desired public good,” said Simeon Bankoff, executive director of the Historic Districts Council, which advocates for New York City’s historic neighborhoods. “You see that in SoHo, NoHo, and we’re seeing that in the South Street Seaport. There are real concerns that landmark preservation and historic preservation, which have done so much good for the city, are being thrown aside because they’ve been successful.

“Landmarking helped stabilize and draw investment into the city’s neighborhoods during the ’70s and ’80s,” he added, “and now it’s a victim of its own success.”