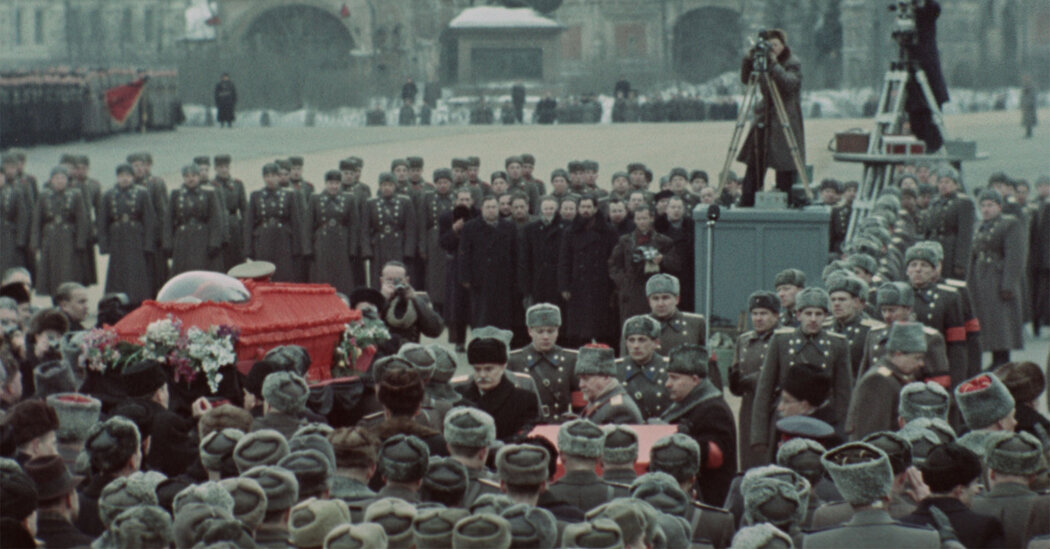 Joseph Stalin died on March 5, 1953. “State Funeral,” the Ukrainian director Sergei Loznitsa’s fascinating and elusive new documentary, shows what happened in the next few days, as Stalin’s body lay in state at the Hall of Unions in Moscow before being transferred to the Lenin mausoleum. (It was removed eight years later, but that’s another story).

Composed entirely of footage shot at the time in various parts of the Soviet Union, the film is a haunting amalgam of official pomp and everyday experience, the double image of a totalitarian government and the people in whose name it ruled.

At the beginning, crowds gather to hear news of the dictator’s death, read out in stately, somber tones over loudspeakers. Those broadcasts, which continue as the masses shuffle past Stalin’s wreath-laden coffin, supply an abstract, rose-colored interpretation of his life amid frequent invocations of his immortality. His subjects — his comrades, in the idiom of the time — are reminded of his undying love for them, as well as of his “selflessness,” his courage and his monumental intelligence. He was, among other accomplishments, “the greatest genius in human history.”

This kind of rhetoric is evidence of the cult of personality that would be disavowed a few years later when Nikita Khrushchev came to power and undertook a program of de-Stalinization. “State Funeral” captures the official manifestations of that cult, including the gigantic portraits of Stalin hanging from public buildings and the arrival of delegations from other communist countries. Fulsome elegies are delivered by the distinctly uncharismatic men who — briefly, as it turned out — took Stalin’s place: Georgy Malenkov, Vyacheslav Molotov and Lavrenti Beria. (Khrushchev, who would shortly kick them out, serves as master of ceremonies).

But Stalin’s famous visage, with its bushy mustache and sweptback hair, is upstaged by the throngs of ordinary citizens who gather to bear witness and pay tribute. The anonymous camera operators, shooting in color and in black and white in far-flung shipyards, factories, oil fields and collective farms, are Loznitsa’s vital collaborators. Intentionally or not, they gathered images that complicate and to some extent subvert the somber, emptied-out language of the regime, disclosing a complicated human reality beneath the ideological boilerplate.

It’s the parade of ordinary Soviets that makes “State Funeral” both moving and unnerving. It is hard not to be touched by the tears shed by grandmothers, soldiers, old men in fur hats and bareheaded young women, even though they are mourning a monster. Other responses are harder to read. Does that steady, unsmiling gaze signify stoicism or defiance? Is that faint smile an expression of relief? Of gratitude? Of terror? When someone looks directly into the camera, do the eyes register suspicion or solidarity?

A brief note at the end of the film reminds the viewer of Stalin’s crimes against his own people — the tens of millions purged, imprisoned, starved and slaughtered. That knowledge sits uncomfortably with what has come before, not because the leaden language of the scripted obsequies is persuasive, but because the grieving citizens are so real. In their variety and particularity, these people don’t seem to belong to a distant place and time. They seem entirely modern and familiar.

Which can be taken as a warning: Any population can be swayed and subjugated by tyranny. They could be us. But the tone of “State Funeral” is more meditative than admonitory. It contemplates the Soviet state at almost the exact midpoint of its existence, illuminating the faces of those who lived there and at the same time reckoning with the dead weight of history.

State Funeral
Not rated. In Russian, with subtitles. Running time: 2 hours 15 minutes. At Film Forum. Please consult the guidelines outlined by the Centers for Disease Control and Prevention before watching movies inside theaters.