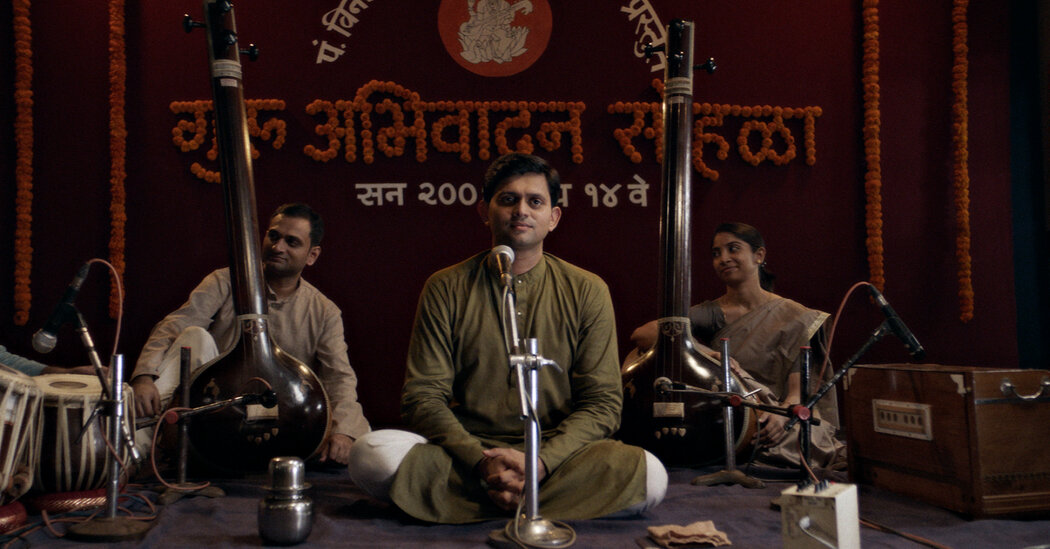 In the age of streaming, the Earth is flat — screen-size, with travel to faraway destinations only a monthly subscription and a click away. But sifting the wheat from the chaff can be hard with so many options, and harder still if you don’t know what to look for in the bounties of different national cinemas and film industries.

So let me be your travel agent: I’ve journeyed through the world of streaming and chosen the best new international movies for you to watch. This month’s picks include an Indian Künstlerroman, a Japanese antiwar wild ride, a campy Nigerian take on Kafka’s “The Metamorphosis,” and more.

Stream it on Netflix.

The filmmaker Chaitanya Tamhane won over critics with his 2015 debut, “Court,” an observant and unsparing drama about a folk singer accused of sedition in Mumbai. Tamhane’s follow-up returns to the Indian metropolis of dreams and to music, but this time with a local arrangement of a universal theme: an artist’s search for purity. Sharad (Aditya Modak), a 24-year-old Hindustani classical singer, devotes his days to his craft, trying to live up to his idols: his late father, a failed musician who kindled Sharad’s passion; his ailing guru, whom he cares for as a son would; and Maai, a legendary singer whose taped lectures Sharad digitizes in his day job.

The scenes are long and still and shot at a medium distance, forming rectangular pools of time dense with visual and sonic details. The film’s many tableaux of performance are especially rapturous: They thrum with the ever-mutable ragas and string accompaniments of Hindustani music, which also provides a bed of sound for a recurring motif of Sharad motorbiking down Mumbai’s nocturnal streets, listening to Maai’s words. These flourishes imbue “The Disciple” with a trancelike quality even as the film captures the most mundane faces, spaces and conversations. As we follow Sharad across nearly a decade, the passions and disappointments of his youth slowly even out into something more modest, more familiar — a life like any other, spent in slippery pursuit of greatness.

Stream it on Mubi.

Forget a swan song: Nobuhiko Obayashi’s final film is a shriek, a tirade, a lecture and a rollicking action-adventure stuffed into a three-hour pop-art package. Known for a lengthy career that spanned experimental films, coming-of-age dramas and antiwar epics, the Japanese filmmaker seems to have indulged his every obsession in “Labyrinth of Cinema,” which premiered a few months before his death in April 2020. The film’s nominal premise is an all-night marathon of war movies at a soon-to-close theater in the seaside town of Onomichi. In the audience are three young men — a hopelessly romantic cinephile, a wannabe yakuza gangster and a nerdy researcher — who dream themselves into the films, so that they’re no longer passive viewers of war intrigue but active participants. Inserting them into various episodes in Japan’s military history from feudal periods to World War II, Obayashi both parodies movie tropes (“The background music is uplifting!” a character notes optimistically when caught in crossfire) and condemns the pyrrhic ends of war. A transfixing explosion of sound, color and strident emotion, the film might overwhelm with its density of Japanese cultural references, but Obayashi’s faith in the power of movies — for both good and ill — needs no translation.

A grieving British woman goes on vacation to Luxor, Egypt, where she reconnects with an old flame and finds some inner peace. It might sound like a riff on “Eat Pray Love,” but in “Luxor,” the British-born Arab filmmaker Zeina Durra gently inverts the tropes of exoticizing, tourism-friendly movies, crafting a narrative that withholds more than it reveals.

Andrea Riseborough plays Hana, a doctor who arrives in Luxor with wide eyes and nervous, wistful gestures that communicate an enigmatic aura of loss. The specifics gradually emerge as if through a fog: Hana has just returned from a war zone in Syria and is about to be posted to another in Yemen. The weight that seems to cling to her lithe frame is her PTSD.

Hana spends much of the film walking dazedly through historic monuments and sunlit landscapes. But unlike the sometimes boorish tourists around her, what she’s seeking is her own past — the person she used to be when she lived (and loved) in Luxor in her youth. When she touches the wall of a temple, the film seems to hush, and you can almost hear the vibrations of the ancient stone edifice coursing through Hana’s body. Slim on dialogue, “Luxor” invites you in with such quiet, grounding moments, as Hana tries to recover her lost memories from the enduring ruins of history.

Stream it on Netflix.

Directed by Abba T. Makama, this low-budget Nigerian satire is as mysterious a shape-shifter as its protagonist: a disaffected security guard in Lagos who wakes up one morning as the purple-haired Okoroshi, an ancestral Igbo spirit that represents good fortune and justice.

Relentlessly surprising, “The Lost Okoroshi” smashes together bits of B-movie, slapstick, mumblecore, fable and surrealism in stark vignettes enlivened by a funky, synth-heavy soundtrack. A crazy cast of characters gathers around the Okoroshi (Seun Ajayi), including a young entrepreneurial sidekick, a couple of sex workers whom the Okoroshi protects from violent clients, an analyst who studies psychic manifestations of the spiritual, and a group of red-bereted traditionalists who call themselves the Igbo People’s Secret Society for Heritage, Restoration and Reclamation — or IPSSHRR, with the “sshrr” drawn out comically each time.

Makama’s schizophrenic style is designed to provoke as much as to entertain. But at the heart of his madcap caper is a classic theme of postcolonial cinema: the battle between tradition and capitalist modernity, whose victims — society’s most vulnerable — are served neither by earthly powers nor gods.

Stream it on Amazon Prime Video.

Set in a neon-lit Paris where the Seine shimmers like liquid silver, “Burning Ghost” follows Juste (Thimotée Robart), a 20-something who at the film’s outset wakes up in a park and realizes that he’s invisible to those around him. It turns out that he’s dead, but the person responsible for sending him on to the next life — a kind, middle-aged woman in a lab coat — recruits him to stay on in this world as her helper. Juste walks the streets of Paris, searching the crowds for those who seem to go unseen, and collects their formative memories so they may pass on in peace.

When Juste runs into Agathe (Judith Chemla), she realizes he is the man who 10 years ago left her abruptly after a brief fling. An achingly romantic, “Vertigo”-like story unfolds (replete with sensuous ghostly sex), forcing Juste to come to terms with what it means to move on from life and, more generally, from loss — to let go of the chances you never took and the person you never became. Taking a subtle, matter-of-fact approach to the film’s fantastical conceit, the director Stéphane Batut creates an ethereal vision of the everyday.