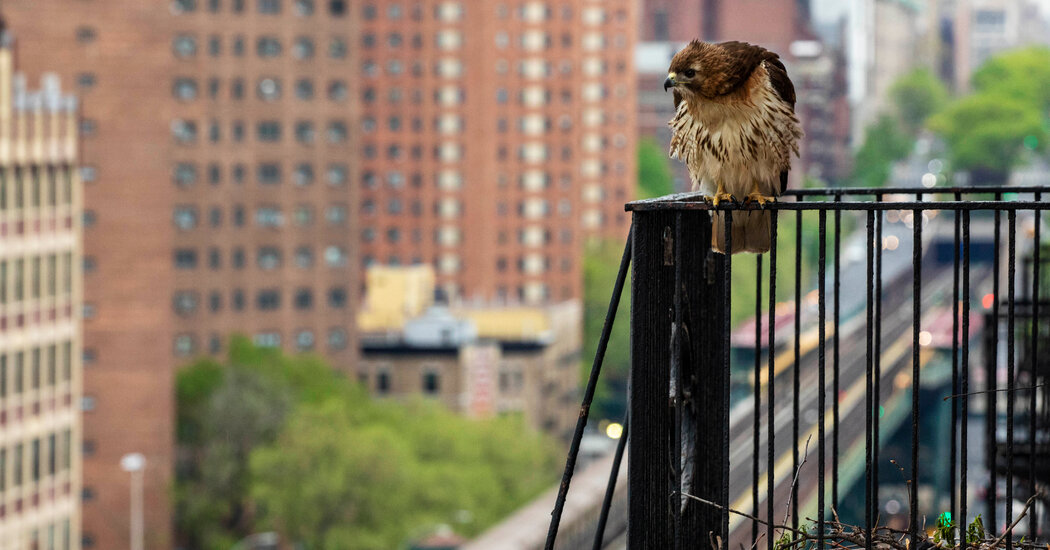 Michael Palma Mir’s first encounter with the hawk was not auspicious. Around the first of March, he noticed it outside his West Harlem apartment.

In his 57 years living there, Mr. Palma Mir had never seen anything like this beautiful bird, a killer. He grabbed his camera and stuck his head out the window for a better shot.

The next thing he knew, it was right there. “It was three feet away from me and coming in real fast,” he said. “All I saw were the talons coming right at my head.” He yanked his head back inside and slammed the window, never expecting to see the bird again.

The hawk returned, again and again, turning Mr. Palma Mir’s fire escape — six stories above a nonbucolic corner of upper Broadway — into a nest and a soap opera for social media.

The saga of Billy and Lilly, two red-tailed hawks that Mr. Palma Mir named after his parents, is one of regeneration and joy, with a tinge of sadness and some dead rat carcasses.

New Yorkers, who pay a premium to live untouched by nature, have a soft spot for predatory birds. In 2004, when a schmancy Fifth Avenue co-op planned to remove a nest belonging to the red-tailed hawks Pale Male and Lola, the birds became citywide celebrities, outshining even their defenders, who included Mary Tyler Moore.

Bird mania has only increased during the pandemic, said Sunny Corrao, an unofficial urban wildlife expert at the city parks department. The department counted 35 red-tailed hawk nests last year, though there may have been more. (The department asks people to report wildlife sightings at nyc.gov/wildlife.)

Mr. Palma Mir was not a bird person. But the appearance of a wild raptor, in the middle of the pandemic, was proof of life in a neighborhood that has had some of the city’s highest rates of infection and death.

A few days after his first sighting, he heard tapping outside the window and figured it was a contractor working on the building. But when he drew the curtains, he noticed parts of the screen torn away and scattered on the fire escape. Sticks were piled in a heap. Once he looked out and saw the hawk returning to the nest with a stick.

He did what any enterprising New Yorker would: He posted pictures on Instagram and Facebook, and he named the bird Billy. He also called the parks department for information, reaching Ms. Corrao.

She had some deflating news for him. A male red-tailed hawk might build several nests, from which his mate chooses one. Mr. Palma Mir reckoned that Broadway was a good spot for a bachelor pad, but too loud and congested for raising a family, especially compared to nearby parks.

But Billy kept working on the nest, shaping the mesh and twigs and newsprint into a bowl, and soon a second, bigger hawk joined him. Mr. Palma Mir named her for his mother, Lilly, who died three years ago.

Several days later, when Lilly moved from her place in the nest, Mr. Palma Mir saw a single egg.

He installed a security camera over the nest so he could observe on his cellphone without disturbing the birds. He’d wake up and start watching from his bed, transfixed.

The birds had distinct personalities. Billy, the more aggressive bird, immediately tested the camera to see if it was edible. Lilly did most of the incubating, especially overnight. Billy brought breakfast in the mornings: usually a rat, but sometimes a pigeon snatched from the ground (red-tailed hawks rarely hunt airborne prey).

Neighbors followed the nest on social media. People had opinions.

“My girlfriend is always taking the women’s side,” Mr. Palma Mir said. “‘Did Billy come at the time he was supposed to come? Is he hanging out too much and not doing his share of the duties?’ One day he didn’t come until 9 o’clock, instead of at sunrise, and as soon as he came, Lilly didn’t even look at him, she just flew out. I said, ‘He’s in hot water.’”

Days went by, then weeks. Ms. Corrao warned him that if the eggs did not hatch within 50 days, they likely would not. Then on the 49th day, a small hole, or “pip,” appeared in one of the eggs. Mr. Palma Mir posted: “This might be the single most exciting and dramatic part of the whole hatching process!”

From the start, the first chick to hatch was bigger and more robust than the second. Mr. Palma Mir named it Alba, for dawn, and the other Eli, for heights. Lilly assiduously fed Alba, beak to beak, but left Eli to fend for scraps.

Friends counseled Mr. Palma Mir that the weaker offspring might not survive. Nature exists without qualms.

Eli died within the week, and Lilly covered his small body in cloth scraps and fresh twigs at the bottom of the nest. “A little death for a big life,” Mr. Palma Mir posted on Facebook. Readers shared their sorrows, in words or emojis. “I haven’t cried in the subway in a long time,” one wrote.

The hawks will likely stay until Alba fledges, usually at 6 or 7 weeks, Ms. Corrao said. After that, they may or may not move on.

For Mr. Palma Mir, who recently got his second vaccination, the birds have been a gift in a dark season, one he could share with others and feel a little less disconnected.

“It’s uplifting, it’s nature,” he said. “They’re claiming the land back. I like to think we can accommodate that, because we pushed them out. My approach has been, let them be. And hopefully they’ll come back next year.

“When Eli passed, that reality came back to me. We’re all surviving, we’re all trying to make it.”