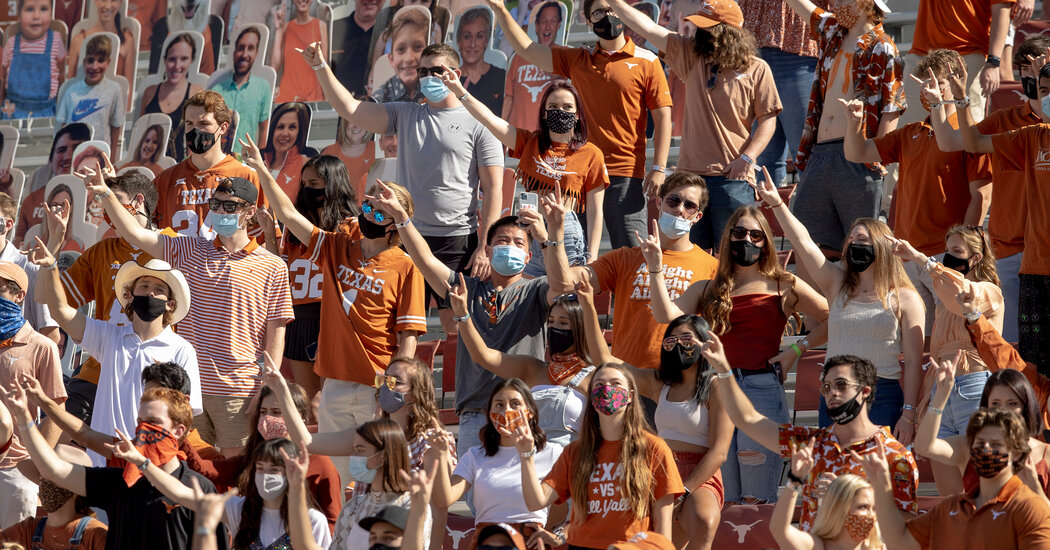 SAN ANTONIO — For generations, the fight song at the University of Texas at Austin has been etched into the state’s very fabric. For students, the words “the eyes of Texas are upon you” have been sung before and after every sporting event and commencement. Beyond the campus, the song is ever-present at weddings and funerals — and even space, where it was a wake-up call for astronauts on the Gemini, Apollo and Skylab missions.

But since last summer, the anthem, which was first performed in 1903 at a minstrel show by white students who were likely in blackface, has divided the Longhorn community, pitting administrators and wealthy donors against students and faculty who want the university to abolish it and write a new alma mater.

University leaders had hoped to quell the uproar over “The Eyes of Texas” after a committee issued a report in March determining that the song had “no racist intent.” But after administrators doubled down on the position that it would remain a central feature of university life, tension has escalated, with student campus tour guides going on strike, pleas from Black legislators to lose the song and threats by wealthy alumni to cut off donations if that were to happen.

The dispute over the song has emerged as a flash point as universities across the country struggle to deal with traditions spawned in earlier eras. Many undergraduates at the flagship campus in Austin, the Texas capital that is often viewed as an oasis of progressive values in a state where Republicans wield immense power, have expressed disdain over the song’s enduring presence.

“We are constantly told that this is a liberal university,” said Bithia Dantoumda, a junior majoring in studio art and journalism who has closely followed the rancor generated by the song. “But this controversy contradicts what the university is saying.”

Ms. Dantoumda, who is Black, added, “I definitely do not feel accepted.”

While some at the university have long complained about the song, the discussions about its origin gathered force after athletes at the school asked last year that it be abolished, part of a broader questioning of racist symbolism at the institution.

Administrators responded to some of their concerns, renaming a building named for a racist professor and commissioning a monument to some of the school’s first Black graduates. But as the whirlwind intensified, the university’s president, Jay Hartzell, made it clear in a public letter that the song would stay, saying it “should not only unite us, but hold all of us accountable to our institution’s core values.”

He also formed a 24-member committee to study the matter. The committee’s report echoed previous findings that the song debuted in Austin at a student-organized minstrel show, an American form of racist entertainment in which predominantly white performers in blackface depicted African-Americans as dimwitted and often happy to be enslaved in the South.

The report also found that the composer of “The Eyes of Texas” borrowed the melody from “I’ve Been Working on the Railroad,” which was inspired by “The Levee Song,” a minstrel tune about using Black laborers to build levees across the South. White students at the university, which remained segregated until 1956, regularly performed the anthem at blackface minstrel shows that continued until the mid-1960s.

Despite such origins, the report contended that the song emphasized “accountability,” celebrating its emergence at birthday parties and county fairs in Texas. The university said its Longhorn band would still be required to play the song at sporting events, though students who declined to do so would be allowed to join a new marching band that would not perform the anthem.

J.B. Bird, a university spokesman, summed up the institution’s position on the song in a brief statement. “‘The Eyes of Texas’ is and will remain our alma mater,” Mr. Bird said.

After the 58-page report was published, members of Texas’ Legislative Black Caucus met with Mr. Hartzell, the university president, and demanded again, unsuccessfully, that the song be discontinued. “It’s not whether you have to sing or not, it’s humiliation that requires you to be there while others stand and sing and pay homage or honor to a racist song,” Gary Bledsoe, president of the Texas N.A.A.C.P., said at a news conference about the dispute.

Students who work or volunteer as campus tour guides for prospective students followed up with a letter to the university asking that a plaque with “The Eyes of Texas” lyrics be removed from the Admissions Welcome Center. (Administrators had already changed the name of the student tour organization last year to “Texas Tour Guides” from “the Guides of Texas,” which was closely associated with the song.)

When administrators said the plaque would stay, more than 50 of the guides — about half of the students in the organization — refused to work.

Jeremiah Baldwin, 19, a sophomore who had been a guide since his freshman year, said he walked away last week from giving tours because he hoped it would encourage administrators to listen to him and other Black students. The position of university leaders, Mr. Baldwin said, “has been a little disheartening.”

“I personally love being a tour guide,” he said. “We go out and talk about the university because we genuinely care. We just want our voices heard.”

Kirstin McGeary, 19, met Mr. Baldwin when both enlisted as tour guides in 2019 and hit it off as friends. But over time Ms. McGeary, a sophomore and a business honors and chain management major, came to disagree on how best to deal with the song’s painful history.

“Nobody can dispute that the song has a racial history,” said Ms. McGeary, who is white and plans to continue as a guide. But if the plaque with the lyrics were to be taken down, “there would not be an opportunity to learn. Let’s use it to educate and learn from our past.”

Anna Epstein, 22, a tour guide who is about to graduate with a major in corporate communications and business ethics, said it was important for her as a white student to support her colleagues of color by joining the strike.

Ms. Epstein said that in her mind, the contested issue has an easy fix. “Just go down there and remove it with a screwdriver,” she said.

Dozens of powerful graduates have also made it explicitly clear where they stand. In emails obtained by The Texas Tribune, several threatened to cease donations, especially for athletic programs, if administrators yielded to the protests.

In one email, a 1986 graduate whose name was redacted by university officials said, “It’s time for you to put the foot down and make it perfectly clear that the heritage of Texas will not be lost.”

“It is sad that it is offending blacks,” the donor wrote. “As I said before the blacks are free and it’s time for them to move on to another state where everything is in their favor.”

Some outspoken faculty are also seething over the university’s inaction. Alberto Martínez, a University of Texas historian specializing in the history of science and mathematics, wrote his own report on the song, documenting not just how it was originally performed by white students mocking African-Americans, but how the Confederate general Robert E. Lee may have inspired its title.

“The song that was beloved in the 1980s, or the 1930s, is not beloved that way anymore,” Mr. Martínez said. “What we see is an obstinate refusal to change.”

The Texas Orange Jackets, a service organization founded in 1923 whose membership is composed of women and nonbinary students, hosted a virtual talk last week with Mr. Martínez. But the meeting was disrupted when someone wearing a face covering and grasping a shotgun joined the online discussion.

“This is a really frightening thing,” said Mr. Martínez, who said the episode unnerved him enough to request armed security guards as he administered final exams on Thursday. Citing the type of tactical shotgun brandished by the person who interrupted the virtual talk, he added, “This is the kind of weapon that you wouldn’t use to hunt deer.”