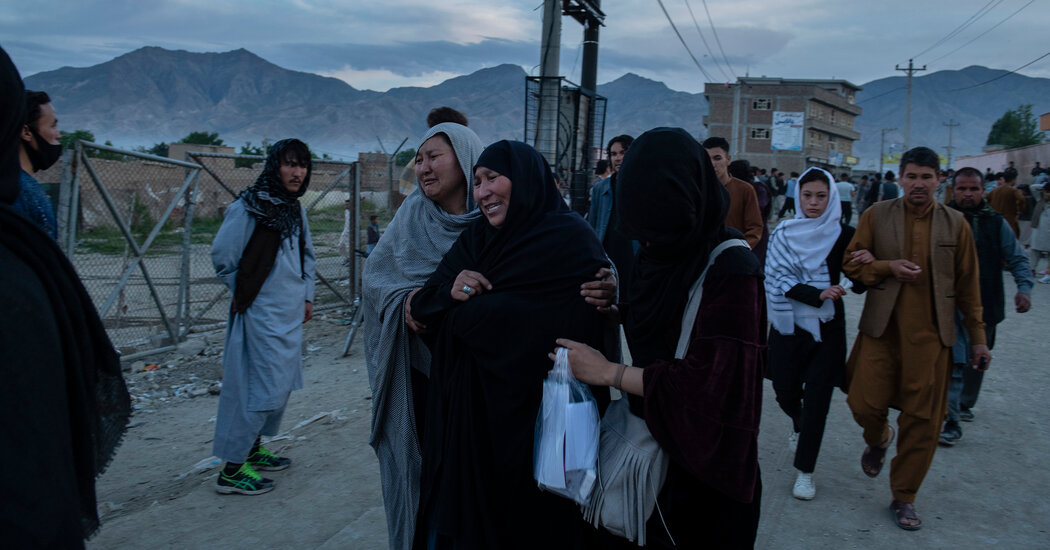 KABUL, Afghanistan — Powerful explosions outside a high school in Afghanistan’s capital on Saturday killed at least 30 people and wounded dozens more, many of them teenage girls leaving class, in a gruesome attack that underscored fears about the nation’s future after the impending American troop withdrawal.

The blast — and the targeting of girls as they left Sayed Ul-Shuhada high school — comes as rights groups and others have raised alarm that the American troop withdrawal will leave women, and their educational and social gains, particularly vulnerable.

The hope surrounding the U.S. withdrawal deal with the Taliban was that it might open the way for a lasting cease-fire, and a respite for civilians who are being killed in horrific numbers. But the reality as American troops depart is being driven home by massacres like this one — there has been more chaos than accord, and more fear than hope.

Details of the attack were murky. It is unclear if it was a coordinated assault, or involved car bombs or a suicide vest — or a combination of all three. But ambulances raced across the city toward the site into the evening.

In recent weeks, the Taliban’s public statements have mostly been triumphal, leaving many fearing that the insurgents will try to seize power through a bloody military victory with the American and international forces gone.

Even if some peace deal were to be reached between the Afghan government and the Taliban, something that appears less likely each day, the result would still be that the Taliban’s brand of harsh Islamist strictures, including keeping girls out of school, could again become the mainstream.

On social media, the Taliban denied responsibility and condemned the attack, which happened in a Western district of the capital where many residents are of the Hazara ethnic minority. The Hazara are a mostly Shiite group in a country rampant with Sunni militants, and they have been frequent targets of Islamic State loyalists. The Hazara, too, are growing increasingly outraged at the violence against them, and at the government’s inability to protect them.

Sayed Ul-Shuhada hosts classes for boys in the morning and for girls in the afternoon. The attack occurred around 4 p.m., as the girls were leaving and the streets were packed with residents preparing for the end of the holy month of Ramadan.

Many residents saw the massacre, which left books and backpacks and bodies scattered across the ground on what had been a pleasant spring afternoon, as a foreshadowing of what is to come.

Dr. Mohammad Dawood Danish, the head of the Mohammad Ali Jinnah hospital in Kabul, said that 20 bodies and more than 40 wounded people were transferred to his hospital. Most of them were students, he said.

“The health condition of a number of girls is critical,” Dr. Danish said. Tariq Arian, a spokesman for the Interior Ministry, said 52 people had been wounded in all.

The presidential palace in Afghanistan blamed the killings on the Taliban, calling them “a crime against humanity,” in a statement.

What happened Saturday, for all its brutality, has become painfully common for Kabul, a capital city that has been rocked by terrifying violence — suicide vests, rocket barrages, massive truck bombs — for years.

But the attack on Sayed Ul-Shuhada high school comes at an inflection point, as U.S. and international forces leave and the next chapter of Afghanistan’s enduring war begins to unfold.

Mohammad Hussain Jawhari, a resident of the area, said three rockets were fired at the gates while the girls were leaving the school. Another witness said the blasts were caused by multiple car bombs. Mr. Arian, the Interior Ministry spokesman, said the nature of the explosion was unclear.

“I am on my way to the hospital — two relatives are missing. I checked at least 10 hospitals and they were nowhere to be found,” Mr. Jawhari said. “People have gathered in the area. They are really angry. It is not for the first time that our kids get blown up and the government doesn’t do anything.”

Sayed Ahmad Hussaini had arrived to pick up his two daughters and saw a man in a Toyota sedan parked outside the school shaking from what he thought was nervousness. Mr. Hussaini said he asked the man what he was doing. “None of your business,” the man in the car replied.

Peace talks in Qatar have given little assurance that the war might soon end, and the Taliban show no sign of wanting to amicably join the current government. The Islamic State is still quietly entrenched, mostly in the country’s east, and is waiting for an opportunity to reassert itself.

Caught in the middle is a generation of Afghans who grew up over the 20 years since the U.S. invasion in 2001. The international community championed improving human and women’s rights in the country following the fall of the Taliban. Now the future of both is unclear.

When the insurgent group governed Afghanistan from 1996 to 2001, it barred women and girls from taking most jobs or going to school.

Roshan Ghaznawi, a women’s rights activist in Kabul, was driving home when she heard about the attack, and soon started crying.

In October, a suicide blast at an education center in the same neighborhood as Saturday’s attack killed at least 24 people, again many of them students.

The attack came at the end of a particularly violent week in Afghanistan. The Taliban have started offensives in the south and north following the start of the withdrawal of U.S. and NATO troops. Last week, a car bomb in Logar, a province just south of Kabul, killed more than 20 people.

At least 44 civilians and 139 government forces were killed in Afghanistan in the past week, the highest weekly death toll since October, according to data gathered by The New York Times.