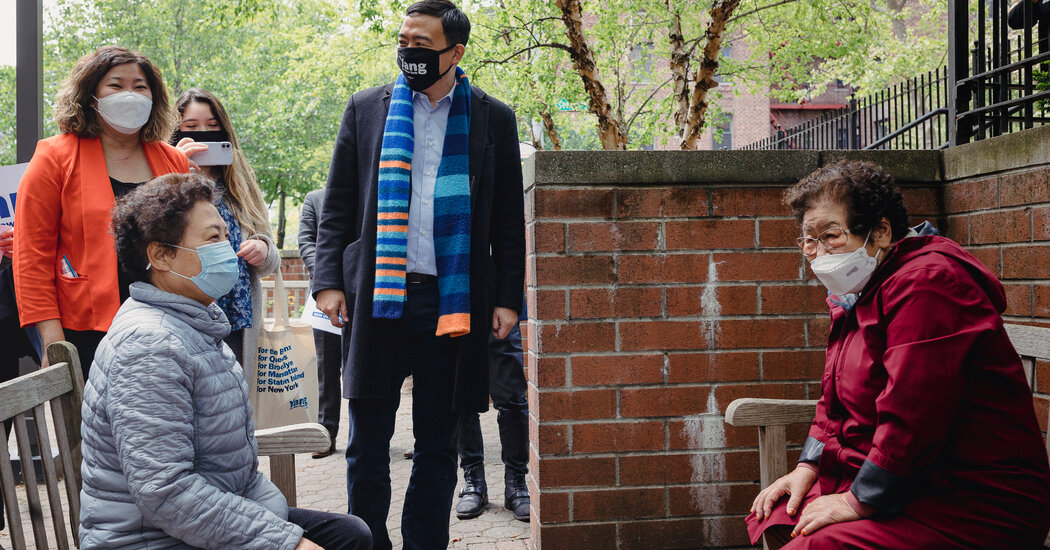 When Andrew Yang ran for president last year, the surprising staying power of his candidacy was powered by a fiercely loyal, politically diverse group of supporters often referred to as the “Yang Gang.”

He also enthusiastically embraced his Taiwanese-American background, drawing support from Asian-American voters, even as he occasionally fed stereotypical tropes like describing himself as “an Asian man who likes math.”

Now, Mr. Yang is running for mayor of New York City, and his appeal to that constituency may be critical in the June 22 Democratic primary. Asian-Americans have generally accounted for 6 to 10 percent of voters in previous elections, and a large turnout could have an outsize impact on a race where voter interest has been lagging.

On Monday, Mr. Yang received a major boost with an endorsement from Representative Grace Meng, the highest-ranking Asian-American elected official in New York, as he seeks to solidify support among Asian-American leaders.

Ms. Meng, the city’s first Asian-American member of Congress, said she decided to back Mr. Yang after she kept hearing from her constituents in Queens who were genuinely excited by him.

“They really feel like he’s someone who gives them hope,” she said in an interview.

Standing outside a school in Flushing, Queens, with Ms. Meng, who is also Taiwanese-American, Mr. Yang said that Asian-Americans were often considered an afterthought in the life of the city. He said that he was glad that people were inspired by his campaign, but he also wants to focus on the nuts and bolts of improving their lives.

Mr. Yang, a former nonprofit executive, already has endorsements from key leaders in the community, including Ron Kim, a prominent Korean-American assemblyman in Queens, and Margaret Chin, a city councilwoman from Hong Kong who represents Lower Manhattan.

Asian-American voters represent an important constituency, with strongholds in Flushing and in Chinatowns in Manhattan and Sunset Park, Brooklyn. But they are hardly a monolithic group: There is great diversity among Chinese and Indian voters and along generational lines, with older voters skewing more conservative.

Eric Adams, the Brooklyn borough president, was endorsed by a group of Asian-American leaders last week in Sunset Park and also has support from Peter Koo, a city councilman from Queens who grew up in Hong Kong.

More than 700 people from the Asian-American community signed a letter opposing Mr. Yang, saying that he was too pro-police and perpetuated racist stereotypes, and that “representation alone is simply not enough.”

John Liu, a state senator who was a leading candidate for mayor in 2013, is considering endorsing Mr. Yang, but had not ruled out backing Mr. Adams or Maya Wiley, a former counsel to Mayor Bill de Blasio. Mr. Liu said that he likes many of Mr. Yang’s plans for the city and that Ms. Meng’s endorsement was significant.

“Grace is a visible and influential leader, especially in this particular moment that we’re in with the Asian-American community feeling under siege and unprotected and underrepresented,” Mr. Liu said.

Mr. Adams had been banking on support from the Asian-American community and continues to make the argument that voters can rely on him because he has been their friend for many years.

“Before Yang, I was the Chinese candidate,” Mr. Adams recently told The New York Times.

Mr. Yang has focused attention on violent attacks on Asian-Americans in New York and across the nation and has spoken about the discrimination he faced growing up.

Bruce Gyory, a Democratic strategist who is not working for anyone in the race, said Mr. Yang could boost Asian-American turnout in the primary to more than 10 percent, comparing him to Mayor Fiorello H. La Guardia, who was Italian-American and who drew voters to the polls.

“His prospects depend upon that being the fact, just as it did for LaGuardia among Italian voters in 1933,” he said.

The League of Asian Americans of New York, an organization that has hosted forums in recent months with some mayoral candidates, has not yet made an endorsement. Many of the group’s members are Chinese-Americans who became politically engaged in recent years in order to oppose the elimination of admissions tests for New York’s specialized public high schools.

David Lee, a leading member of the organization, said that the two most important issues for the group were public safety and education.

Mr. Lee, a retired financial analyst and registered Republican, said that he liked Mr. Yang’s personality and approachability, and believed it was important to have an Asian-American mayor. But Mr. Adams was much stronger in supporting specialized testing and law enforcement, Mr. Lee said, noting that Asian-American shop owners have raised concerns about enforcement for shoplifting and violent crimes.

“He’s a former police officer. That really says it all,” Mr. Lee said.

Mr. Adams has hammered Mr. Yang for his decision to leave New York City during the pandemic and for not being a native New Yorker — Mr. Yang grew up in Schenectady, N.Y., and Westchester County, and has lived in the city for more than two decades since attending Columbia Law School.

His wife, Evelyn, grew up in Flushing and attended public school there. Her father owned a small business, and her mother worked as an insurance and real estate broker before becoming a stay-at-home mother. Her first job, the campaign noted, was at a bagel shop in Bayside, Queens.

Mr. Yang said on Monday that he had a “special connection” to voters in Queens because of his wife’s roots, and it was like a “second home” to him.

In downtown Flushing on Monday, reaction to Mr. Yang and the mayor’s race ranged from optimism to indifference, even as large posters of the candidate were visible, including outside the busy New World Mall food court.

Takla Tashi Lama, 42, who works in the jewelry business and was waiting in line at the Queens Public Library to be vaccinated, said he planned to vote for Mr. Yang.

Benjamin Chin, 30, who was working at a vaccine site at the Queens Public Library, identified himself as a proud member of the “Yang Gang.” He said that one important issue for him was keeping the Specialized High Schools Admissions Test to make sure that Asian-American students have a path to a good education. (Mr. Yang said he wants to keep the test, but to also consider other criteria as part of the admissions process to the elite high schools.)

But most of all, Mr. Chin liked that Mr. Yang was an outsider.

“I’m very much in favor of not having a politician in office,” he said. “I don’t trust politicians.”