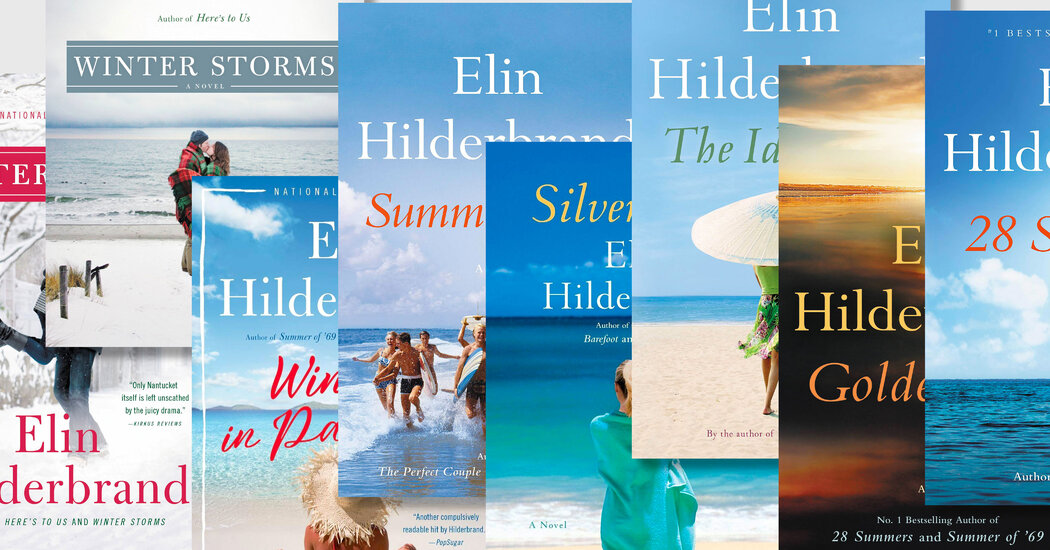 What’s the best way to discover Elin Hilderbrand? Look on the wicker shelf in your rented beach house. There you’ll find her shoulder to shoulder with Dean Koontz, Terry McMillan, Emily Giffin and other titans of summer whose well-thumbed volumes have not been left behind so much as bequeathed to the next wave of vacationers.

Once you’ve located a chunky Hilderbrand novel, it won’t matter that the water view you were promised is visible only through binoculars from the roof. Say goodbye to Malibu, Miami or Mantaloking; you’re now en route to Nantucket, where most of Hilderbrand’s 27 books take place. (For the past 15 years, she has published at least one a year, sometimes two.) Personally, I’ve never set foot on the island, but thanks to these books, you could drop me at the ferry dock and I’d be able to find my way to Madaket Beach, Sankaty Head Light, Jewel Pond or any number of places where Hilderbrand’s characters dine, swim, cheat, marry and, yes, die.

These books are escape hatches for serious readers, bridges between mothers and daughters, cat’s cradles connecting friends. They’re beach reads with undertow — a confluence of frivolity (picnics, convertibles, flings) and gravity (divorce, deception, loss). They unlock the doors of sumptuous mansions and weathered cottages, lay out buffets ranging from fried clam strips to bouillabaisse, and introduce characters of all ages, perspectives and incomes.

If you read Hilderbrand’s books in chronological order — as I present them here, with one exception — you’ll notice stakes getting higher, the younger generation getting older and protagonists who were once mapping out their lives now taking stock of how it went. To become a Hilderbrand completist is to watch her evolution from ingénue dipping a toe in authorial waters to seasoned expert planting a flag on the dune, declaring: “I’ve survived some things. Listen up.”

So grab a beach chair, refill your water bottle (or your rosé), and let these books tide you over until fall.

I’m in the mood for sisters against the world.

In BAREFOOT, Brenda Lyndon and Vicki Lyndon Stowe arrive on Nantucket with Vicki’s young sons and a pregnant neighbor who’s fleeing her cheating husband. The plan is for the sisters to relive childhood summers in their aunt’s Sconset cottage while Vicki undergoes treatment for lung cancer and Brenda rebounds from a professional scandal. But Vicki’s lists, Brenda’s work and their leisurely bike rides to Sesachacha Pond are foiled by crises and the presence of a wise, handsome, suspiciously capable college student they hire to care for Vicki’s boys. Published in 2007, Hilderbrand’s sixth book shows a mother getting her sea legs at the same time she catches a glimpse of her own mortality. From the instant her taxi crunched into Aunt Liv’s crushed clamshell driveway, I was dabbing my eyes with my beach towel.

Show me a woman who says, ‘To hell with all that.’

In A SUMMER AFFAIR, Claire Danner Crispin is bogged down by expectations and responsibilities and haunted by the role she might have played in a near-deadly car accident. When the husband of the driver — whose final margarita was purchased by Claire — asks her to chair the Nantucket’s Children Summer Gala, she accepts without hesitation, setting in motion a chain reaction of decisions that threaten to upend everything she holds dear. Cue late-night, wine-fueled planning sessions with the handsome billionaire who’s the polar opposite of Claire’s humdrum, television-obsessed husband; cue friend drama and the reappearance of a high school flame. Think you know where this is going? Think again. Hilderbrand is way too smart to give away the whole story in her title.

I love novels ripped from the headlines.

Where do you turn when your husband has cheated investors out of billions of dollars — and your sons may or may not have been involved, and the media is camped outside your Park Avenue apartment? In SILVER GIRL, Meredith Martin Delinn flees to the fog-blanketed Nantucket mansion of her oldest friend, Constance O’Brien Flute. (When it comes to names, Hilderbrand takes the same approach she does to meals: You can never have too many.) Clearly the Madoff family inspired this plot, but Hilderbrand gives it her own sun-kissed, optimistic spin — which is not to say it’s all Rosa rugosa, just that there’s a silver lining to the ugliest of circumstances.

If I don’t get out of the heat, I’m going to faint.

To me, the appeal of a snowy beach is as baffling as the hoopla over frozen hot chocolate, so I will admit that I hardly paid attention when Hilderbrand published her first winter novel — aptly named WINTER STREET — in 2014. By the time I got around to delving into the saga of the Quinn family, they had three more books to their name: WINTER STROLL, WINTER STORMS and WINTER SOLSTICE. We meet this fractured family as they’re about to celebrate Christmas on Nantucket, where their patriarch, Kelley, owns the floundering Winter Street Inn with his second wife, Mitzi. Just as the Quinns are about to converge for the year’s most stressful holiday, Kelley walks into Room 10 and finds Mitzi in the arms of the man they’ve hired to play Santa Claus. From there, we’re off to the dysfunctional family derby, with bottomless eggnog and evergreen garlands galore.

I’m looking for ‘Parent Trap’ vibes with an adult twist.

When Billy Frost and Eleanor Roxie-Frost split up, each parent retains sole custody of one identical twin daughter. Billy and Harper live on Martha’s Vineyard; Eleanor and Tabitha on Nantucket. All is (mostly) well until Billy dies and Tabitha’s daughter rebels and suddenly the twins have to find a way to bridge the 20 or so miles between their islands and their lives. Unlike their cinematic forebears, these sisters grew up together; but what they don’t know about each other is what makes THE IDENTICALS one of Hilderbrand’s most binge-worthy confections. Also, Eleanor is a designer — think Lilly Pulitzer — so this one includes a layer of fashion on top of the usual mouthwatering spreads and postcard-worthy scenery.

I need a break from Nantucket.

In honor of her 50th birthday — and her twin brother’s — Hilderbrand returned to the year she was born, when the Vietnam War was raging, Woodstock was thrumming and Neil Armstrong stepped onto the moon. In SUMMER OF ’69, we follow the descendants of Exalta Nichols to their summer home on Nantucket and to Martha’s Vineyard, where the rebel child, Kirby, has a job at the Shiretown Inn in Edgartown. Here, Hilderbrand explores the challenges of interracial and interfaith relationships in the ’60s, the stress of having a beloved brother deployed overseas and the tragedy incurred by a young, drunk senator. She stitches real-life events onto a fictional canvas and provides a soundtrack with her chapter names, including “Both Sides Now,” “Born to Be Wild” and “Fly Me to the Moon.”

Actually, I need a break from this country.

WINTER IN PARADISE is the first installment in Hilderbrand’s second trilogy of winter books (and it came out the year before “Summer of 69”). This time, she dusts the New England sand off our feet and whisks us to the Caribbean (where she spends part of each year). Our tour guide is Irene Steele of Iowa City (where Hilderbrand went to graduate school), a widow who goes to St. John with her sons to try to make sense of her husband’s death in a plane crash. Why does he have a fully furnished house on the island? Why was he away from home so much? One man’s double life turns out to be his survivors’ good fortune in ways I will not reveal. I will just say that, 24 hours after I started this book, I purchased its sequel, WHAT HAPPENS IN PARADISE, and I did not leave either book to be enjoyed by strangers at the end of my vacation.

Hook me up with an old-fashioned rom-com.

Before Mallory Blessing dies, she tells her son, Link, to look for an envelope in her desk drawer. On the front of the envelope are two words — “Please call” — and inside is a phone number. Link follows his mother’s instruction and is shocked to find himself in touch with Jake McCloud, the husband of the front-runner in the upcoming presidential election. We learn that Mallory and Jake have enjoyed a secret yearly rendezvous for 28 SUMMERS, through marriage, kids, jobs and Jake’s wife’s political career. Why the two haven’t been able to make it as a real couple becomes clear as the story unfolds; but still, we root for them, visit after visit, knowing how the story will end and hoping we’re wrong.

Give me the best of the best.

I have no patience for dead people who hang around in fiction, but I made an exception for Vivian Howe, who gets killed in the opening pages of Hilderbrand’s latest, most philosophical and (I’m declaring it) best novel, GOLDEN GIRL, which comes out on June 1. Like her creator, Vivi is a “wash-ashore” on Nantucket, a best-selling author of beach reads and a mother of three — and let’s hope the similarities end there. At the beginning of the book, a hit-and-run accident lands Vivi in the Beyond, where she is granted one summer to watch over her children, plus three “nudges” should she want to influence their decisions. The story is a family saga, a mystery and a moving retrospective that manages to be clever without being coy. As an investigator tells the chief of police Ed Kapenash, who plays a recurring role in the Hilderbrand oeuvre: “This is all very life-imitating-art here, Chief. I feel like I’m living in one of Vivian Howe’s novels.” But, she adds, “They usually have happy endings.”