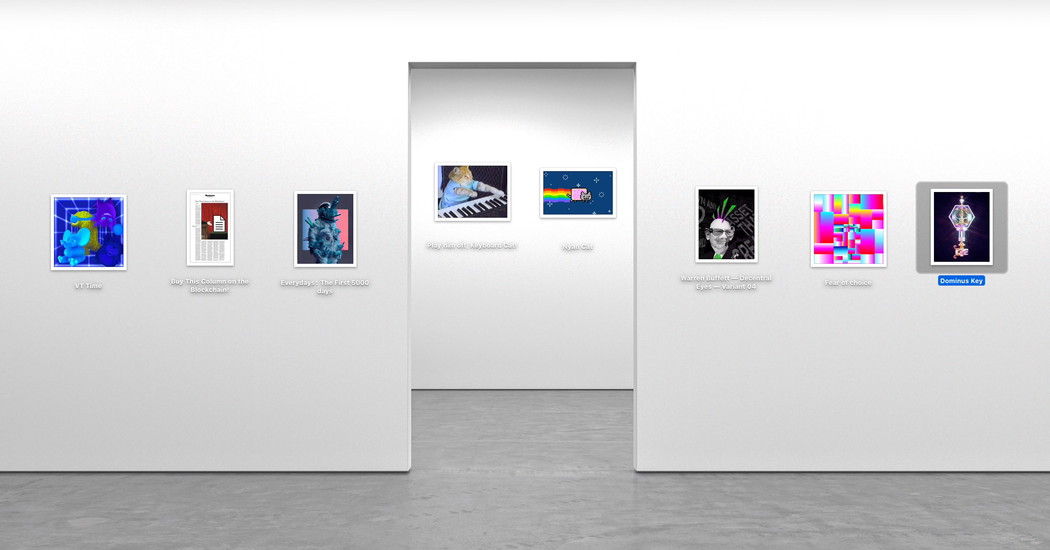 For the nerdy crypto crowd, cryptoart’s aesthetics — and its clubby, Twitter-heavy networking — felt like an art scene they could finally “get.” Most collectors I spoke to had never bought any physical art and were slightly intimidated by the prospect of going into a gallery. They often didn’t know much about art history. But the visual palette of much cryptoart spoke to them, because it had been heavily influenced by memes and the trippy, glitchy tropes of the internet or the futuristic style of sci-fi movies and illustration. If cryptoart was in any sense a visual aesthetic movement, that would be the through-line: a generation of creators whose inspiration came not from looking out the window but from looking into Windows — beholding a digital world of software, movies, games.

“I feel like my original introduction to digital art was the ‘Final Fantasy’ video game kind of vibe,” says Blake Kathryn, a Los Angeles cryptoartist and filmmaker who uses 3-D modeling software to create images of sleek, android-ish figures and vistas of dreamy architecture. (She created Paris Hilton’s digital portrait that sold as an NFT for $1.1 million.) “It was trying to be hyperreal, but the technology wasn’t there to make it real,” she says. “Your brain fills in the blanks of what it should look like in a higher fidelity.” Another cryptoartist, Olive Allen, often uses pop-culture icons from Furbies to the video-game character Kirby in her NFT work. “It’s really an art form for an Internet-addled mind — like, totally A.D.H.D. generation,” says Colborn Bell, the co-creator of the Museum of Cryptoart, which owns hundreds of artworks and displays them online. He didn’t mean it as an insult.

The traditional art world is divided about the aesthetics. Last fall, the Vancouver Biennale decided to include NFT art, and the Biennale president, Barrie Mowatt, went to several NFT sites to scout for some works. He eventually found pieces that impressed him, but, he says, “I remember thinking, Boy, there’s a lot of [expletive] art right here.” Noah Davis, a specialist in postwar art at Christie’s who is a more enthusiastic fan, argues that cryptoartists have a playful spirit often missing from fine art. But he understands why old-school art collectors turn up their noses: “Some of it does look like it belongs in a head shop or on a dorm wall or, you know, on a message board,” he says.

Clearly the NFT market is in part being driven by speculation: Many collectors regard cryptoart as a potentially lucrative investment, much like Bitcoin itself. And on some level it also facilitates pure peacocking, conspicuous consumption for a crypto age. Paying outrageous sums for art — bidding against others in financial combat — is an age-old way for rich people to flaunt their wealth, Kal Raustiala, a legal scholar at U.C.L.A., points out. “The status-signaling parts are really huge,” Raustiala says. “There’s a lot of wealth, and people need a place to park it.”

In the old days, people hung their $40 million Picassos on their mansion walls. Because NFTs are just data, though, cryptoart collectors are mostly staring at screens (if they’re even looking at their holdings). Sometimes these are very high-tech screens. Collectors have created virtual-reality galleries so they can strap on their goggles and behold their art on a virtual wall and invite friends to join them for viewing parties. Other collectors eschew this sort of display; they simply pull up their art on their iPhones or computer browsers, the way they use Instagram. Indeed, several people told me that they appreciate digital art for space-saving reasons. Before he discovered cryptoart, Token Angels bought so many actual paintings that his family upbraided him: “Stop buying things, stop buying these pictures, we don’t have any more walls!” Now he has a virtual 3-D gallery at an online site called Cryptovoxels, where he exhibits his cryptoart, including his $100,000 Matt Kane. “I would describe Matt Kane’s art as a pure orgasm for the eyes,” he told me, “because these images are so beautiful, you want to zoom in.”

There’s one aspect to NFT culture that can seem utterly bewildering to outsiders: Someone who buys an artwork NFT owns only the NFT. The NFT typically contains data that corresponds to information about the artwork, including the creator, the title and a link to an online copy of it. But the visible part of the art, the JPEG or animated GIF, the thing you look at? That is just a digital file hosted somewhere online, with the NFT commonly pointing to it. (If that site hosting the art goes down, the NFT no longer even points to anything.) Anyone can go to SuperRare or another NFT art site, right-click to copy the file, and then post it to Instagram or Facebook, say, or make it the background on a phone.

So what, precisely, do the collectors think they’re getting when they buy an NFT? Many say they’re acquiring proof of their ties to the artwork and to the creator. They can assert bragging rights, as it were. As for the pixels themselves — well, no one cares if other people can see them, too. “I can hang a really nice print of the ‘Mona Lisa’ on my wall and that doesn’t mean I have the ‘Mona Lisa,’” Goltra told me. All the collectors I spoke to professed to be happy if the artworks they owned were copied widely around the internet: Millions of people staring at a piece of digital art make it more valuable for the person who owns it.