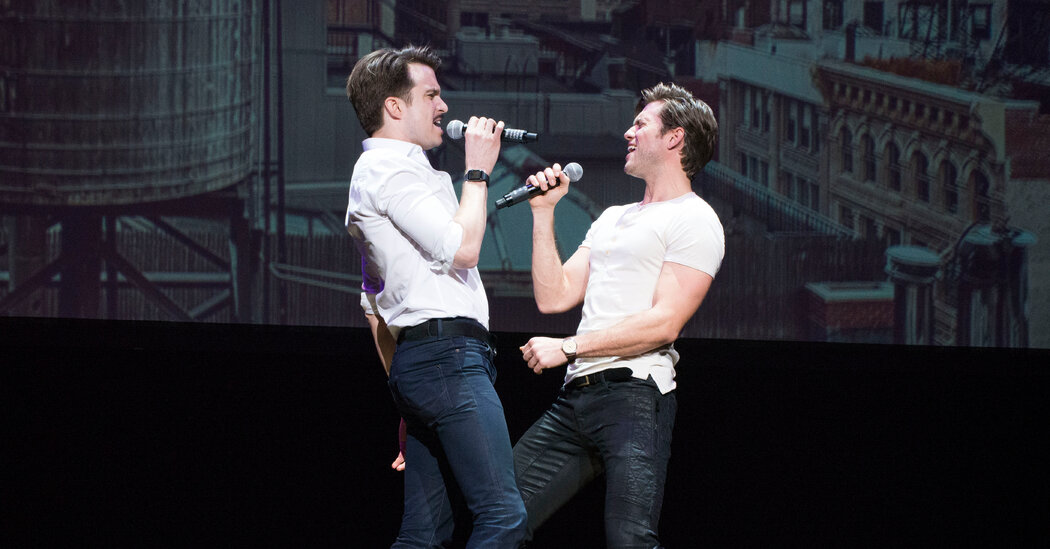 “It is about access.” That, put plainly, is the main reason the Young Vic in London will continue to livestream shows even after in-person theater resumes. “Access is our driver,” Kwame Kwei-Armah, the theater’s artistic director, said in a recent interview. “And this is a way that we make that access just a little more here and now.”

As Broadway and theaters around the United States prepare to return to live performances, there are still many questions around issues of ticket price, fairness and programming. Streaming is likely to remain part of those discussions since, as you can see in the selections below, it is more varied and, well, accessible than ever.

Since 2001, the annual “Miscast” benefit for MCC Theater has created an alternate universe in which gender roles are not so much erased as gleefully subverted, with performers taking on numbers they would be unlikely to land in typical productions. This year will see the return of Gavin Creel and Aaron Tveit for another power duet after their take on “Take Me or Leave Me,” from “Rent,” became an instant classic five years ago. Other participants include Kelly Marie Tran, Annaleigh Ashford, Renée Elise Goldsberry, Cheyenne Jackson (welcome back!), LaChanze, Idina Menzel, Kelli O’Hara and Billy Porter. May 16-20; mcctheater.org.

What is mainstream theater to German eyes can be completely wild to American ones. So this annual event should blow a few minds. Like the Golden Mask Festival in Russia, Theatertreffen showcases exciting shows from diverse companies. This year’s productions — online, with subtitles — include revisited classics and new works, both livestreamed and on demand. Dive in. May 13-24; berlinerfestspiele.de/en

The writer and performer Kristina Wong continues to use her own experiences to interrogate politics and civics with this follow-up to “Kristina Wong for Public Office” last year. In that monologue, Wong talked about her stint on the Wilshire Center Koreatown Neighborhood Council in Los Angeles. Now, she turns her attention to how she enrolled family and friends to make face coverings during the pandemic. May 14-16; nytw.org.

‘The Importance of Being Earnest’

The excellent Play-PerView series is rolling out a reading of Joshua Harmon’s lacerating “Bad Jews” with the original cast members Tracee Chimo Pallero, Philip Ettinger and Michael Zegen. Harmon went on to bigger things, including “Significant Other” on Broadway, but this show is arguably his sharpest — or at least his funniest — and was propelled by Chimo’s etched-in-acid portrayal of venomous self-righteousness. May 15-19; play-perview.com. ​

Happily, Chimo also turns up in the Spotlight on Plays reading of Wendy Wasserstein’s “The Sisters Rosensweig” as Pfeni, the youngest of the title siblings (a role originated by Frances McDormand in the Off Broadway premiere, in 1992). There’s more: Lisa Edelstein will read Sara (Jane Alexander way back when) and Kathryn Hahn will be Gorgeous (once the great Madeline Kahn). May 20-24; stellartickets.com.

This livestreamed version of Lucinda Coxon’s twist-filled dark comedy about a pair of roommates will star Jassa Ahluwalia (“Unforgotten”) and Sophie Melville in Britain, with Greg Germann (“Grey’s Anatomy”) joining from the United States. Coxon is a fine writer, of the play “Happy Now?” and the film adaptation of “The Danish Girl,” and this trans-Atlantic setup should make for an interesting experiment. May 19-22; stellartickets.com.

Let’s face it: Behind-the-scenes shenanigans are often more fun than what’s onstage. In the virtual benefit “Tales from the Wings: A Lincoln Center Theater Celebration,” stars including Patti LuPone, Audra McDonald, Rosemary Harris, Paulo Szot and Ruthie Ann Miles will share what we hope will be juicy anecdotes, interspersed with footage from some classic productions as well as teasers for two shows that were postponed by the pandemic: the musical “Flying Over Sunset,” from James Lapine, Tom Kitt and Michael Korie; and Ricky Ian Gordon and Lynn Nottage’s operatic adaptation of her play “Intimate Apparel.” May 13-17; lct.org.

In Britain, “For One Knight Only” gets an encore airing after its premiere in November. Kenneth Branagh hosts Judi Dench, Derek Jacobi, Ian McKellen and Maggie Smith as they reminisce about their incredibly long careers — imagine a highbrow installment of the “Red” film series, except with stars firing off bons mots rather than guns. May 21-30; www.stream.theatre/season/116.

In the United States, it’s hard to fathom how wildly popular the playwright Sarah Kane is on European stages: Her uncompromisingly bleak “Crave” hits a raw nerve and responds to a malaise that is often hard to pinpoint. Now, the Chichester Festival Theater in England is again making available its acclaimed production of this “throat punch of a play,” from November. May 19-29; cft.org.uk.

The company Colt Coeur may be small, but it has an impressive track record unearthing intriguing shows, so we’re ready to gamble on this play about an interracial marriage in 1970s and ’80s Brooklyn, by Eden Marryshow. Steve H. Broadnax III, of Katori Hall’s “The Hot Wing King” and the coming “Thoughts of a Colored Man” on Broadway, directs. May 22-26; coltcoeur.org.

‘Broadway by the Year’

As this cabaret series’ name suggests, it usually focuses on musicals that opened in a given year, but this spring the attention is shifting to songwriters. Start off with “The Kander & Ebb Years” (through May 12), in which Beth Leavel, Ute Lemper and Tony Yazbeck tackle material from “Chicago” and “Cabaret,” but also “Flora, the Red Menace.” Next, Max von Essen, Liz Callaway and Ethan Slater help celebrate everybody’s favorite pandemic hero with “The Sir Andrew Lloyd Webber Years” (May 24-26). So, “Love Never Dies”: yea or nay? thetownhall.org.