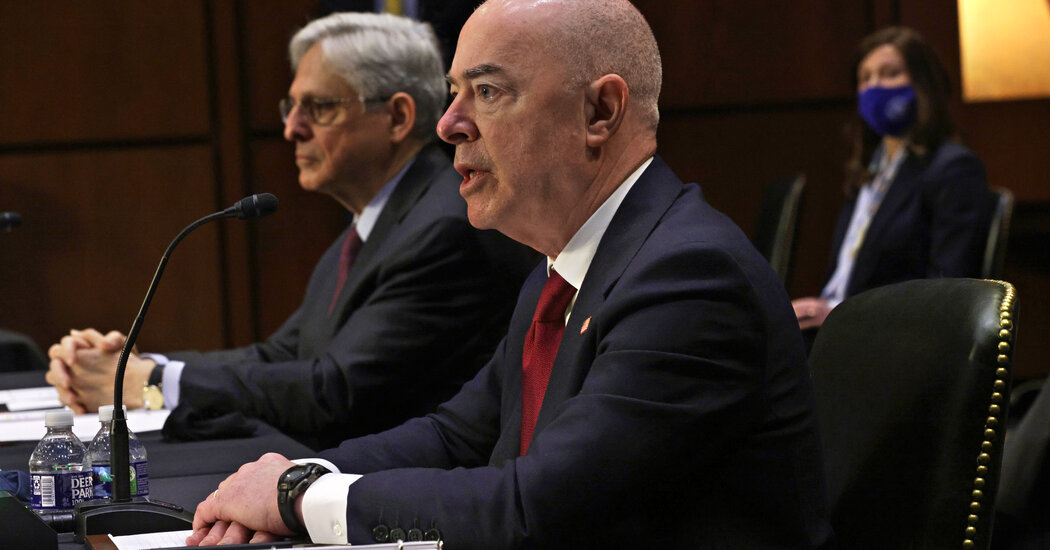 “Specifically those who advocate for the superiority of the white race,” Mr. Garland told the Senate Appropriations Committee.

The cabinet secretaries’ comments reflected a dramatic shift in tone from the Trump administration, which deliberately downplayed the threat from white supremacists and similar groups, in part to elevate the profile of what former President Donald J. Trump described as violent threats from radical left-wing groups.

Last year, a former head of the Department of Homeland Security’s intelligence branch filed a whistle-blower complaint in which he accused the department of blocking a report about the threat of violent extremism and described white supremacists as having been “exceptionally lethal in their abhorrent targeted attacks in recent years.”

Mr. Mayorkas told senators on Wednesday, “The department is taking a new approach to addressing domestic violent extremism, both internally and externally.”

As Mr. Garland and Mr. Mayorkas testified before the Appropriations Committee, former members of the Trump administration told the House Oversight Committee that Mr. Trump’s false claims to have won the 2020 election had fueled the domestic terrorism threat, a point many Republican lawmakers have rejected. Earlier on Wednesday, House Republicans ousted Representative Liz Cheney of Wyoming from her leadership position for publicly pushing back on Mr. Trump’s claims, in the latest sign of Mr. Trump’s continued hold on the party.

While the Justice and Homeland Security Departments have long been involved in countering violent extremism inside the country, Biden administration officials have said the Jan. 6 pro-Trump riot at the Capitol showed an urgent need to focus more on domestic extremism.

Senate Republicans did not share that focus on Wednesday and instead grilled Mr. Garland and Mr. Mayorkas on border security issues.

The top Republican on the committee, Senator Richard C. Shelby of Alabama, said that Democrats were politicizing the issue by describing violent domestic extremists as coming from the far right. He equated the Capitol riot to the protests against police violence last summer, and asked Mr. Garland why the Justice Department seemed to be prioritizing pursuing the perpetrators of the Jan. 6 attack over those who looted shops and attacked law enforcement during racial justice protests.

Mr. Garland said that “if there has to be a hard hierarchy of things that we prioritize,” the Jan. 6 attack would be at the top because it most threated democracy.

“I have not seen a more dangerous threat to democracy than the invasion of the Capitol,” Mr. Garland said, calling it “an attempt to interfere with the fundamental element of our democracy, a peaceful transfer of power.”

The Justice Department is leading the investigation into the Jan. 6 riot and has arrested more than 430 people across the country, Mr. Garland said. Prosecutors have begun informally negotiating plea deals, while some defendants have been fighting the charges.

Both Mr. Garland and Mr. Mayorkas said that the threat of domestic extremism had significantly changed because of online communications, particularly via encrypted apps, and the proliferation of increasingly lethal weaponry.