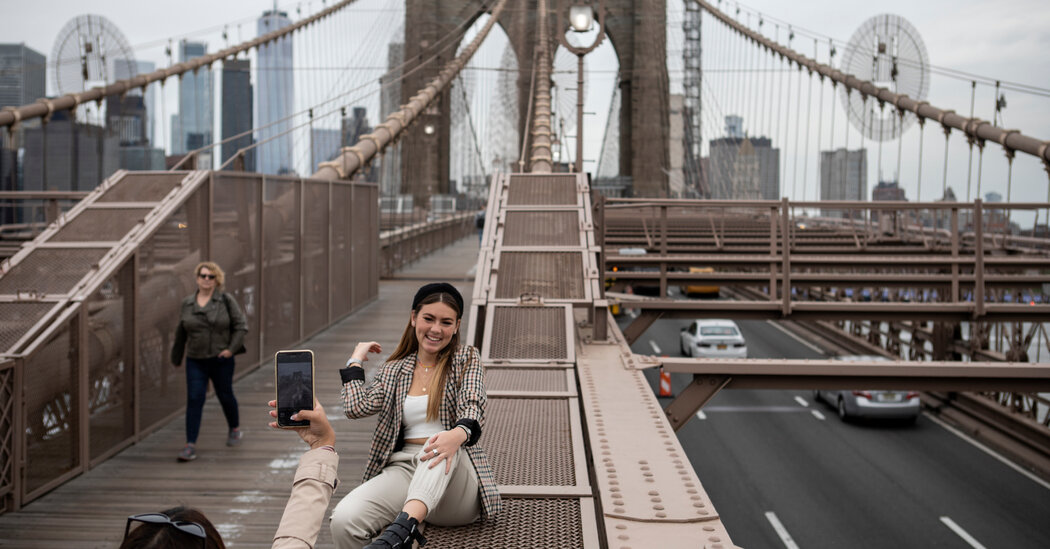 For 10 straight years leading up to the coronavirus pandemic, a torrent of tourists from around the world poured into New York City, with their numbers rising to a record level in 2019.

Then they were gone.

When the city went into lockdown in March 2020, all that tourist trade — the vacationers, business travelers, day-trippers and honeymooners — disappeared.

Now, New York needs those tourists and their disposable income back, if it is to fully recover.

Before the pandemic, tourism accounted for more than 280,000 jobs — more than 7 percent of all private-sector employment — and generated $46 billion in annual spending, officials said. But last year, nearly 90,000 of those jobs and $35 billion of that spending evaporated, according to a report from the state comptroller.

Mayor Bill de Blasio and Gov. Andrew M. Cuomo have announced dates for the rollback of most coronavirus restrictions, setting the stage for a full reopening of the city starting in mid-May.

But it will take far longer for the tourism industry to bounce back.

The number of international visitors, who stay longer and spend more than domestic travelers, is not expected to reach prepandemic levels until 2025, city tourism officials project.

Recent reports of violent crimes, including a shooting in Times Square and random attacks in the subway, could make some people wary about coming to New York.

The city is also dealing with a perception that there are more homeless people in the heart of Manhattan, in part because many Midtown hotels have become emergency shelters, and because in streets with fewer workers and tourists, the homeless stand out more.

Still, New York City is slowly reviving. Restaurants, hotels and museums are opening their doors to customers again. Musicians and comedians are performing in some smaller venues.

“There are unmistakable signs that the city is awakening,” said George Cozonis, general manager of the Plaza Hotel, which plans to reopen some rooms and its famous Palm Court for afternoon tea on May 20 after being closed for more than a year.

There is not enough demand yet to justify making all of the Plaza’s rooms and amenities available, Mr. Cozonis said. But to help revive the tourist trade, he said, “We felt that everyone had to do their part. You need the critical mass of attractions and places to stay.”

As word of the city’s reopening spreads, some people are already booking trips and putting New York on their itinerary.

“I’m not worried at all,” said Kelly Koffler, who plans to fly up from her home outside New Orleans for five days in July. “I just love to travel, and I’m ready to get back at it.”

Ms. Koffler, 43, said she and her husband had visited Las Vegas every month this year, but it was not until April that the casinos “went back to life as normal.”

The pandemic inflicted the heaviest economic damage on cities like Las Vegas, Los Angeles and New York that are among the country’s most popular tourist destinations.

But job losses reversed faster in states like Florida and Nevada that relaxed restrictions on activity and started welcoming visitors sooner. The Las Vegas Convention and Visitors Authority started a national ad campaign in April.

In New York, the pandemic made painfully clear how deeply the city had come to rely on tourism as an engine of its economy.

In 2019, the city received more than 66 million visitors, an all-time high, and filled more than 85 percent of its hotel rooms, according to its tourism-promotion agency, NYC & Company. Those visitors spent $47 billion and helped support more than 280,000 jobs, according to a report from the state comptroller.

But last year, the number of visitors plunged by two-thirds, to 22 million, many of them having arrived in the 10 weeks before the lockdown. With so few tourists or business travelers, hundreds of hotels shut their doors and laid off maids and porters. Restaurants let waiters and kitchen crews go.

More than 200,000 jobs were lost last spring at the city’s hotels, restaurants, museums, theaters and stadiums. In some industries, more than half of the workers were laid off and, 14 months later, many of them have not returned to work. More than 1,000 restaurants closed for good.

Now, with elected officials trumpeting the reopening, dozens of hotels will start accepting guests by early summer. And despite the challenges, some new hotels, including the Margaritaville Resort Times Square, are pushing ahead with plans to open and compete for business.

About 40 of the 226 hotels in the city that were closed at the end of March have announced plans to reopen by early summer, said Vijay Dandapani, the president of the Hotel Association of New York City. The city’s hotels that were open in April filled more than 50 percent of their rooms, on average, the highest rate in more than a year, according to STR, a research firm.

Broadway theaters are not scheduled to reopen until September, but some in-person events are returning sooner. The Tribeca Film Festival plans to kick off June 9 with a premiere of “In the Heights” on eight screens across the five boroughs, said Gloria Jones, a festival spokeswoman.

Still, tourism can’t fully recover without visitors from overseas. Under an order from the Centers for Disease Control, travelers from overseas must have tested negative for the virus within three days of their arrival or attest that they have recovered from the virus.

“If President Biden decides to relax restrictions on international travel, even on a selective basis, that would make a quantum difference,” Mr. Dandapani said.

Most laid-off hotel workers are vaccinated and ready to return, union officials said. All they need is the trickle of tourists who have ventured into the city to turn into a steady stream.

Luring back tourists has become a popular promise among the candidates vying to succeed Mr. de Blasio as mayor. Several have pledged to take ambitious steps, including holding citywide festivals and handing out free theater tickets, to revive the industry.

Mr. de Blasio has directed $30 million of federal aid to NYC & Company for promotional campaigns. The agency is producing its first ads to run on national TV in more than a decade, said Fred Dixon, chief executive of NYC & Company, and they are scheduled to start appearing in June.

Some travelers may hesitate after the recent shooting in Times Square sent people fleeing and injured three people, including a visitor from Rhode Island who was shot in the leg. The episode is part of an increase in gun violence that is fueling a perception at least that the city has become less safe.

Mr. Dixon said his agency’s efforts would first focus on drawing visitors from the region and neighboring states. One early initiative asked New Yorkers to invite friends and families to choose the city as the place to reconnect after getting vaccinated.

In the meantime, the city will count on more impulsive visitors like Stephanie and Jason Bates, from Altus, Okla. They arrived in late April and spent a couple of days seeing the sights and searching for restaurants serving customers. Then they got married at the Top of the Rock observation deck at Rockefeller Center.

The trip came together about a week before the wedding in what the newlyweds described as a flash of recognition that life is fragile and time is fleeting.

“With Covid and everything that’s going on, with scheduling and timing, we just decided that we’re going to elope,” Ms. Bates, 49, said while sitting on a bench in Brooklyn Bridge Park gazing at the skyline of Lower Manhattan.

The park was uncrowded, but for Mr. Bates, 38, who runs a farm, that was part of the appeal.

“I think it’s fantastic,” he said, adding, “Probably wouldn’t have liked it as much if it was like what you see in the movies, and everybody’s shoulder to shoulder and touching and all of that.’’

Georgette Blau, whose On Location Tours guide visitors to sites where scenes of hit movies and TV shows were filmed, said she planned to resume limited tours in July. In recent weeks, she has booked small private tours, including a trio who paid $450 to roll by locations from “The Marvelous Mrs. Maisel” in a 1957 Studebaker.

Dang and Mei Tran, a couple from Dallas, took advantage of the open space around the Vessel sculpture at Hudson Yards in Manhattan to snap some selfies. Mr. Tran, 38, said he found the city less crowded and less expensive than he anticipated.

“Dallas is developed,” he said, “but it’s not like this.”

Dallas, for example, does not have a two-story Statue of Liberty holding a margarita glass. That mash-up will be the centerpiece of the Margaritaville hotel, a $360 million project that will have an elevated outdoor pool deck and a rooftop bar with a view of the ball that drops on New Year’s Eve.

“This may be the best time in our lifetimes to open a hotel in New York,” said the project’s developer, Sharif El-Gamal. With so many of the city’s hotels still shut and others closed permanently, he added, “This is an unbelievable opportunity.”

Across town, Michael Bauman of Miami was taking advantage of the sparse crowds to lead Barbara Barra on a whirlwind tour of the sights, including the High Line, Grand Central Terminal, St. Patrick’s Cathedral and Central Park.

Mr. Bauman, 28, was on his third trip to New York and said he was struck by how the pandemic had changed the city: “Now it’s not open all night,” he said, “and you see more homeless in the streets.”

Ms. Barra, 21, also from Miami, had a different perspective. She called the trip, which was Mr. Bauman’s gift to her, “a love story.”