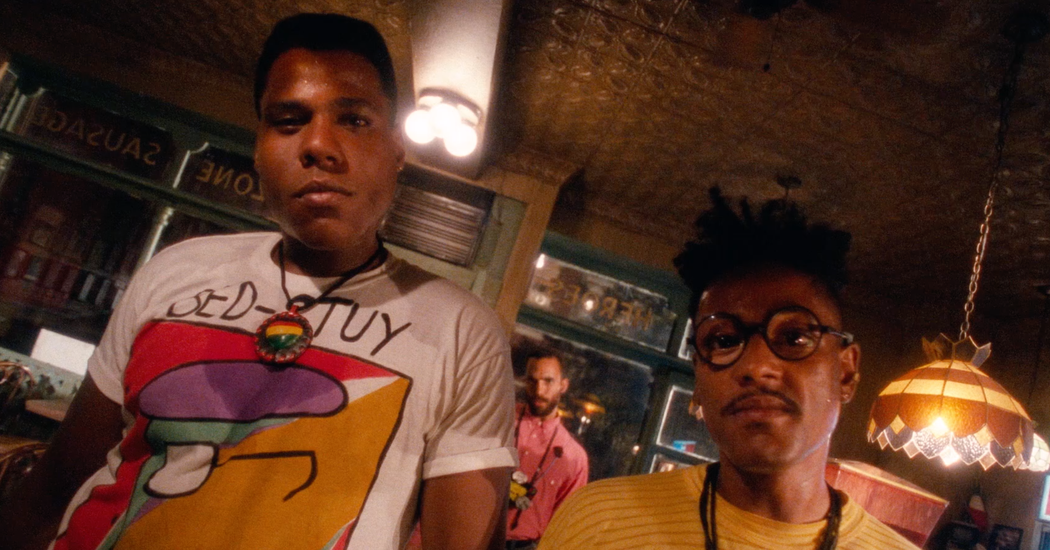 Hello, everyone. This is Spike Lee, the producer, writer, director of ‘Do the Right Thing.’ This past June was the 30th anniversary of this film. I know the column is called ‘Anatomy of a Scene.’ I’m renaming this. I’m calling this ‘Anatomy of a Murder.’ The chokehold of Radio Raheem, played by the late, great Bill Nunn, my Morehouse brother— ”(SINGING) Fight the power. Fight the power. We’ve got to—” —was based upon the death of Michael Stewart. September 1983, Michael Stewart, a graffiti artist— he’s about as big as I am. 11 New York City transit police jumped on him and strangled our brother to death. That’s where I got the idea for the chokehold murder of Radio Raheem. And five years ago, Eric Garner died the same way that Radio Raheem did in a movie that was based upon the real life choke hold of Michael Stewart. So a lot of things in this film that even though it was written 31 years ago are still happening today. Black and brown people are still being murdered today by police forces across the United States of America, and the people who inflict this death walk free— don’t get fired, don’t get suspended. The film takes place one day, the hottest day of summer, in the People’s Republic of Brooklyn, New York. So tensions have risen all throughout the day. And the reason why it looks the way it is because the edict, the command, to Ernest, the DP, Wynn Thomas, the production designer, Ruth Carter, the costume designer— here’s what I told them. I said, look, I want people to be sweating in an air conditioning theater when they see this film. [CRASHES] And what we wanted to do is after he destroys the boombox, it’s quiet like the calm before a storm. Everybody’s like, what’s next? Everybody knows it gonna be bad. Everybody’s looking around— Radio Raheem. I mean, that was personal. It was like he got beat with the baseball bat because you’ve seen him the whole film with his boombox blasting Public Enemy’s ‘Fight the Power.’ We did not have a very good stunt coordinator, and people got hurt. Danny Aiello’s son, Danny Jr., was his father’s double right here. This film was shot on one block in Bedford Stuyvesant. That one block got renamed ‘Do the Right Thing Way,’ the only street in the history of New York City named after a movie. [COMMOTION] Well, we gotta show that, number one, Sal’s Famous Pizzeria, is on the corner of the block directly opposite the Korean fruit and vegetable stand. So the fracas spilled out from Sal’s pizzeria to the street. So we had to show the block getting involved. “Fight!” “Mookie!” We wanted to start down and crane up so you could see the block. [COMMOTION] “Kill you! We’re gonna kill you, Sal!” And this becomes a brouhaha. Ozzie, trying to talk some sense— the love hate rings which is a homage to ‘Night of the Hunter.’ Robert Mitchum had them tattooed on his fingers. Now the cops come. Now we already have seen these two cops already. That’s Rick on the left— that’s Rick Aiello, Danny’s son. “Break it up! Break it up! Get off him! Get off him! Get out of the way!” And Sandoval play the other cop— Miguel Sandoval. Now you know if there’s a fight, who are they gonna grab? “You get over here!” [INTERPOSING VOICES] So this is a very hard scene to shoot. And for 31 years, it’s been a hard scene to watch. [INTERPOSING VOICES] “Just take him down, man.” “Goddammit, you’re killing him! You’re killing him!” “Give it up, asshole! Give it up!” This is the Michael Stewart chokehold. And when that Eric Garner thing happened, I put on my Instagram and Facebook with my editor, Barry Brown, and we cut back and forth between Radio Raheem and Eric Garner. And it’s the same thing. “Radio Raheem!” “Radio Raheem!” “No!” And then when he falls, we laid the camera down on the street so he would fall right into the lens.