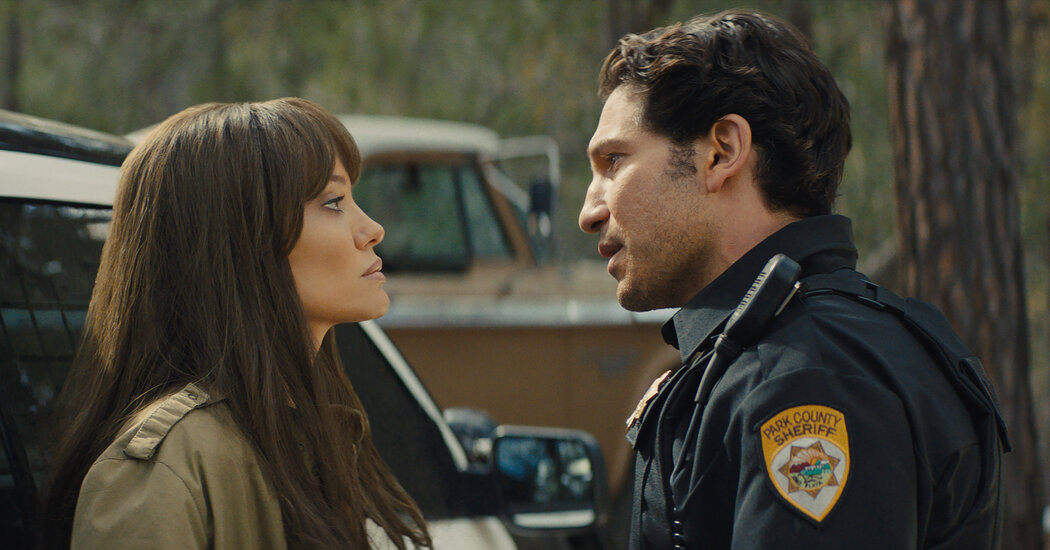 I’m not sure I believed the plot for a minute of “Those Who Wish Me Dead,” but as a means of pitting righteous characters against implacable assassins in a succession of abrupt, pitiless, life-or-death confrontations, the story has a terse effectiveness. The film, based on the 2014 novel by Michael Koryta, has been brought to the screen by the writer-director Taylor Sheridan. Although he isn’t the sole screenwriter here, the film paints in the bold, primal strokes of his scripts for “Sicario” and “Hell or High Water” without getting bogged down in the sloggy self-seriousness of his previous directorial feature, “Wind River.”

The movie takes its time, but it also doesn’t waste time. The main pair do not meet until almost 40 minutes in. Until then, “Those Who Wish Me Dead” patiently juggles different narrative lines. One, initially the least interesting, involves Hannah (Angelina Jolie), a daredevil smoke jumper who has had a barely veiled death wish ever since her poor judgment of forest fire winds led to the deaths of three children. (Only a movie would so quickly entrust another boy to her care, to offer a chance at redemption.) In an indication of how “Those Who Wish Me Dead” never asks to be judged on plausibility, the film twice puts Hannah in the path of lightning strikes. There is an almost comic casualness to the way she dumps antiseptic on each new wound.

The movie also tracks Connor (Finn Little), the precocious son of a Florida forensic accountant, Owen (Jake Weber). Owen has discovered something that could get both of them killed. The nature of the discovery is the film’s MacGuffin — all we know is that governors and congressmen would be implicated by its disclosure, and that they are scared enough that the government (or someone government-adjacent) has hired two fixers (Aidan Gillen and Nicholas Hoult) to kill anyone with the information. (Tyler Perry, who makes a deferred entrance and appears in only one scene, plays their boss.)

The hit men are introduced faking a gas line explosion to murder a district attorney; they have few qualms about killing bystanders. They are also skilled investigators who deduce that Owen and Connor have run to Montana, where Owen’s former brother-in-law, Ethan (Jon Bernthal), and Ethan’s pregnant wife, Allison (Medina Senghore), run, yup, a survival school, and where Connor will eventually meet Hannah. It’s emblematic of Sheridan’s efficiency that when Ethan the uncle and Connor the nephew finally connect, the movie doesn’t pause to have them say hello.

All of this is elemental stuff, a battle between unmitigated darkness (in the form of the fast-thinking killers) and total virtue, as Hannah and Connor struggle to reach safety, then retreat, then run again, all while outwitting a forest fire that Gillen’s character has set to the distract the locals. New Mexico plays Montana, and not being familiar with the terrain, I was convinced by that. Accurate or not, the landscape gives as sensational a performance as any of the actors.

Those Who Wish Me Dead
Rated R. Cruel and especially upsetting violence. Running time: 1 hour 40 minutes. In theaters and on HBO Max. Please consult the guidelines outlined by the Centers for Disease Control and Prevention before watching movies inside theaters.