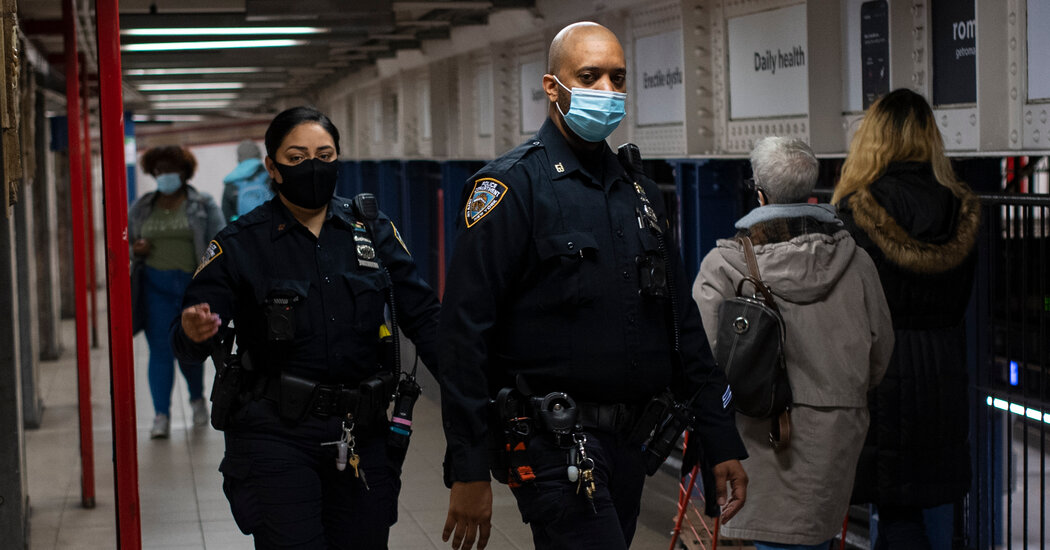 In the span of 12 minutes early Friday, the police said, a group of men attacked commuters aboard a moving subway train, increasing concerns about public safety in New York City’s transit system just as 24-hour subway service is set to resume on Monday.

The attackers, striking together on a southbound Lexington Avenue express train as it passed through several stations starting at around 4:30 a.m., slashed three riders, two in the face and one in the back of the head, the police said. A fourth person was punched. The attackers took a phone and a wallet from one of the victims.

The three slashing victims, all men in their 40s, were hospitalized and in stable condition, according to the police. One of the attackers, they said, slashed at the three men as another urged him on.

The attacks came amid rising concern about crime in New York. Much of that concern has focused on the subway, which is about to resume nonstop service after it was curtailed last May for the first time in the system’s history because of the pandemic.

Despite the flurry of reported attacks, the overall trend in subway violence is less clear. Data suggests that crime per rider may be lower so far this year than in 2020, when ridership plunged amid a citywide lockdown, but up from 2019.

And now, even as the system gears up for a full return, at least a dozen attacks and other violent episodes have taken place on train cars or at stations this month alone.

The police initially said that two men in their 20s were responsible for the three early morning attacks. But at a news conference later on Friday, officials said the assaults were the work of a larger group that was involved in a fourth attack around the same time.

In that incident, the police said, a 48-year-old man was stabbed in the eye with a knife. Like the other victims, he was taken to a hospital, where he was undergoing surgery, the police said.

Jason Wilcox, an assistant police chief, said at the news conference that the investigation was continuing but that it appeared that the victims had been attacked by a group of men who were coordinating their actions and occasionally splitting into smaller groups.

“It looks like they were pairing off, mixing off, as the train was moving down along the 4 line this morning,” Chief Wilcox said.

The spate of assaults prompted transit officials to renew their call for more police officers in the subway. An additional 500 officers were deployed to the system in February after a homeless man was accused of stabbing four people in the subway.

The issue of subway crime was among the issues discussed at a mayoral debate on Thursday. The eight leading Democratic candidates in the race all used the occasion to express concern about the system’s safety, but they were split over whether more officers were needed.

Andrew Yang, Eric Adams, Kathryn Garcia, Shaun Donovan and Ray McGuire said they would expand the police presence in the system. Scott Stringer, Dianne Morales and Maya Wiley said they would not.

On Friday Sarah Feinberg — who, as the New York City Transit Authority’s interim president, has consistently raised concerns about the system becoming a de facto shelter for homeless people — lashed out at Mayor Bill de Blasio over the attacks.

“The mayor is risking New York’s recovery every time he lets these incidents go by without meaningful action,” Ms. Feinberg said in a statement.

In a background note appended to Ms. Feinberg’s statement, the authority pointed out which of the mayoral candidates had expressed support for assigning more officers to the subway.

Ms. Feinberg was appointed to the authority’s board by Governor Andrew M. Cuomo, who has frequently clashed with Mr. de Blasio, a fellow Democrat, on policies related to the transit system, and to the pandemic and its impact more broadly.

Last week, Mr. Cuomo compared the current condition of the subway to what it was like in the 1970s, and he blamed city officials for failing to address the system’s problem.

A spokesman for Mr. De Blasio, Bill Neidhardt, responded to Ms. Feinberg, saying that the city had diverted officers from desk duty to subway platforms and trains.

“We’re going to keep putting massive resources into this fight to keep our subways safe,” Mr. Neidhardt said in a statement. “Meanwhile, the M.T.A. sends out statements that point fingers and talk about mayoral politics.”

Danny Pearlstein, the policy and communications director for the Riders Alliance, a public transit advocacy group, said in a statement that the subway remained overwhelmingly safe, and he urged Mr. Cuomo not to spread fear about the state of the system.

“The reality is that the governor’s fear-mongering may be scaring people away from public transit and making riders who need to travel less safe,” Mr. Pearlstein said in the statement.

The victims of the dozen subway attacks this month include: a 60-year-old woman stabbed in the back; two men slashed in the face on separate days; a woman hit in the face with a skateboard; a man visiting from Ecuador attacked with a screwdriver; a transit worker punched in the face, and a subway conductor chased off a train by a razor-wielding man.

Several of those episodes resulted in service being shut down, as did other incidents that did not involve attacks on people.

On May 5, a man shouting incoherently about Covid-19 vaccines broke into an operator’s compartment on a train car and holed up there for 90 minutes, and hours later another man pulled the emergency brakes on a train, smashed the windows and fled.