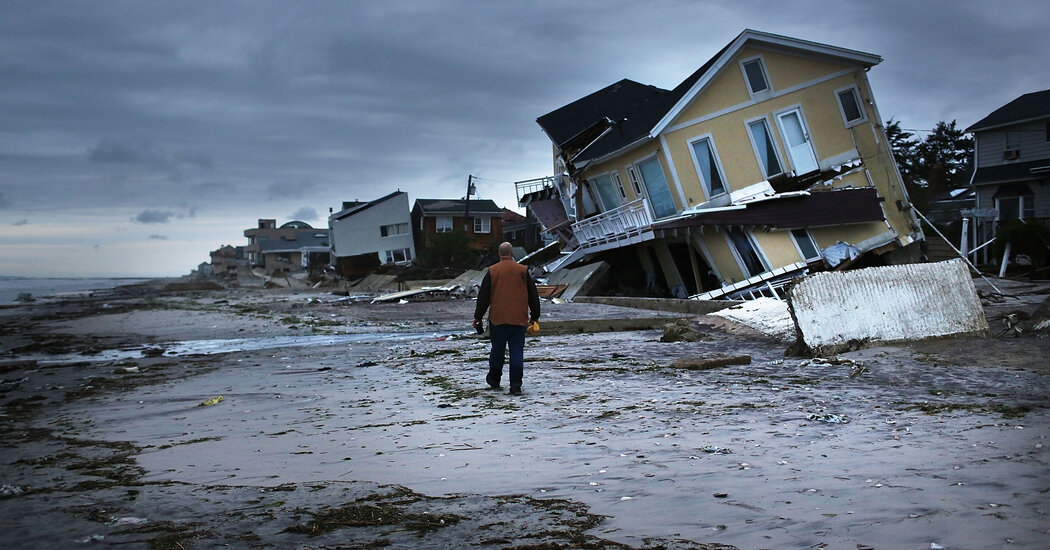 The infrastructure bills taking shape in Congress will be the first test of the Biden administration’s ability to legislate on climate change. Most eyes are on how greener infrastructure can cut emissions of warming gases.

But it will take decades to achieve the enormous reductions required globally; in the meantime emissions will continue and so will the warming. That’s why the nation has much at stake in bolstering communities, highways, rail lines, water systems and the like now against the devastating consequences of climate change, including worsening hurricanes, flooding, rising seas, drought and wildfires. We must also get better at managing climate disasters as they become more numerous.

Over decades, our spending on infrastructure and disaster relief has become fine-tuned to political expedience rather than the geophysical realities of the climate. We build roads and protect houses in vulnerable places; we subsidize insurance for homes prone to flooding and for years avoided updating insurance maps that would let the federal government set rates that reflect real danger. When communities are flattened by nature, the nation helps pay for rebuilding — often rebuilding the same infrastructure in the same place, a target for the next disaster. Flatten, flood, scorch — rebuild and repeat.

The fact that politics, not geophysics, sets the tune in Washington is hardly surprising. What’s needed now is a politically smart strategy for giving voice to geophysics to help our communities prepare for the future.

Studies going back decades have shown, for example, that farmers and city managers who prepare for a changing climate can absorb the shocks, at least to a point. By contrast, policies such as disaster assistance and subsidized flood insurance can have the opposite effect: They invite people to invest in harm’s way and make us less prepared when disaster strikes, as will become more common in a warming world.

We have combed through data from experts and the government and have tabulated what the federal government spends on climate-related disasters, including on infrastructure and insurance. We measured the balance of spending between “building back the same,” the usual response to disasters, and investing in making our infrastructure more resilient.

Our study found that the federal government is spending about $46 billion per year on recovery from disasters, which is seven times the level of investment in resilience. (Depending on the accounting method, that ratio could be as high as 40 to 1.) That nobody really knows these numbers shows why the nation must take stock of its infrastructure and disaster spending with an eye to resilience. At the same time, the National Climate Assessment, mandated by Congress and prepared by climate scientists every four years to evaluate the nation’s climate vulnerabilities, needs to look beyond what the scary science says to assess how government policies and private investment are amplifying or dampening the potential consequences of global warming.

Resilience matters because it is impossible to wall off the country from the effects of climate change. Tens of trillions of dollars are invested in infrastructure and personal property, with a lot more investment to come. Federal money accounts for only one-quarter of the nation’s investment in public infrastructure, but how that money is spent has a big influence on how the rest of the country invests and behaves.

Redirecting federal money toward resilience rather than simply rebuilding after disasters will be hard. But the longer we wait, the harder it will become as the costs of climate change mount.

More and more people are living in places that are highly exposed to weather that will get nastier with climate change — places that are already hot, communities along the coasts vulnerable to storms and sites in or near increasingly flammable forests. For example, the Great Miami Hurricane of 1926 would today incur insured losses of $128 billion — dwarfing all big storms of recent memory.

Last year all 94 major natural catastrophes — severe storms, droughts, wildfires and floods, along with earthquakes — caused insured losses of $74 billion in the United States. Over the next three decades, climate change could raise the annual losses in the country from hurricanes alone by one-fifth, according to a new analysis by AIR Worldwide, a catastrophe modeling firm. (Disclosure: AIR hired Mr. Gesick for an unrelated matter after the analysis was published.)

Everyone deeply involved with infrastructure and disaster assistance knows that changes are needed. When municipalities on the front lines borrow for infrastructure, nobody much pays attention to their exposure to climate change in part because everyone involved, including the investors, expect to be bailed out if disaster strikes. The Federal Emergency Management Agency is brimming with good ideas such as smarter mapping and earmarking funds for grants that can make communities more resilient. We also found emerging bipartisan support for many of these reforms, including in the most recent big disaster recovery reform bill that Congress passed in 2018.

But when good ideas meet politics, they seem destined to die at the hands of powerful opponents, such as updating flood insurance policies (unpopular in the Northeast, as we have seen recently) or stopping the most egregious rebuilding after hurricanes (unpopular in much of the coastal Southeast). One fix would be for Congress to follow the playbook it used to close military bases, where piecemeal shutdowns faced political death. As it did with base closures, Congress should create a commission to do the work. It would draw up a package deal to build climate resilience that can spread the pain while making the nation better able to withstand the calamities that are sure to come.

We must get ready, politically, for the next big disaster — not just because the nation will need recovery but also because that’s the political window for reform. For example, after Hurricane Sandy blew through Northeastern and other states in 2012, inflicting about $75 billion in damages, Congress paid $58 billion of those costs, and the 7:1 ratio on spending to rebuild versus resilience dropped to about 2:1. So, too, the 2017 hurricanes that ravaged Houston and Puerto Rico were followed by the 2018 Disaster Recovery Reform Act, which set up the innovative Building Resilient Infrastructure and Communities program, focused largely on resilience, with funding to help move some communities out of harm’s way.

Geophysics will never set the agenda in Washington, but a smart political strategy can give it a stronger voice — and not a moment too soon as the planet warms. More spending on infrastructure is long overdue, but these new investments must come with the right incentives so that we don’t inadvertently exacerbate the dangers of warming.

David G. Victor is professor of industrial organization and climate science at the University of California, San Diego, and a nonresident senior fellow at the Brookings Institution, where he leads a project examining how climate change will affect the financial markets. Sadie Frank was a research assistant at Brookings. Eric Gesick is a visiting scholar at the Institute on the Environment at the University of Minnesota and was a chief underwriting officer for Axis Capital, a global reinsurance company.