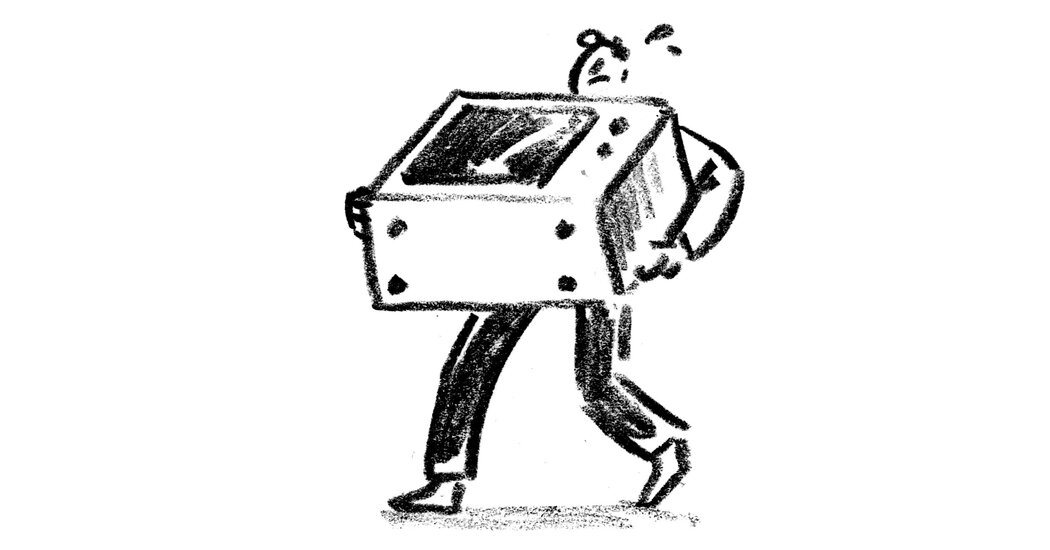 Out With the Old

It was about 20 years ago, and my in-laws were moving. They offered my wife and me a television that they weren’t going to have room for in their new apartment.

It was fairly new, had a much sharper picture and better sound than our circa-1983 model and was about half as big and heavy.

Once we had taken possession of this svelte new beauty, I did what any self-respecting Brooklynite would do under such circumstances: I brought the old clunker out to the stoop so that someone could take it home and make use of it.

Almost as soon as I closed the door after taking out the TV, the bell rang. I opened the door to find a middle-age man standing there.

“What,” he said incredulously, pointing at the television, “no remote?”

On the Manhattan Bridge

I was biking back to Brooklyn across the Manhattan Bridge and the sun was setting. It was beautiful out. I had the wind in my hair and a smile on my face.

It was one of those simple moments that just felt so perfect I wanted to share it with someone.

I looked over and saw a train passing by. I waved gleefully at an older man who was looking out the window. He brightened and waved back, and then he disappeared.

My roommate had an internship at the Metropolitan Museum of Art, and I had a part-time job at a Starbucks on the Upper East Side. As cheap as the rent was, I needed to make more money if I was going to stay in the city.

Eventually, I landed an interview with a nonprofit group. To get to the office downtown in time, I had to go straight from work. After my shift was over, I changed into fresh pants in the bathroom, then rushed to the subway.

When a train arrived, I settling into a seat, yanked off the work shirt I had on over a tank top and put on a button shirt and a blazer. Then I tugged off my black sneakers and socks and slipped on a pair of pumps.

As I was shoving my barista clothes into my tote bag, I glanced up to see a middle-age woman looking at me.

And I got the job.

On a recent weekend, my wife worked up the courage to do what she had not been able to bring herself to do for several months: take her beloved pair of well-worn but broken boots to the textile drop-off site at the local farmers’ market.

As we approached the drop-off tent, I realized that my wife was several steps behind me. With a hint of derision, I said to the attendant there that she needed a minute to say goodbye to her “old boots.”

He responded by walking up to her and pulling out his keys.

“I understand,” he said, pointing to a thin strip of black fabric that was duct-taped to his key ring. “This is all that is left of ‘Patches,’ my favorite coat. ‘Patches’ got me through basic training and much more.”

My wife placed her boots gently into the donation bin.

“Will you take good care of my boots?” she asked.

The attendant assured her that he would.

I was 23 and hungry and tired after a Sunday of shopping on the Lower East Side when I discovered Ratner’s on Delancey Street. I was shown to a booth, and a bowl of onion rolls and a menu were slapped down on the table.

“What’ll ya have?” the waiter demanded without looking up from his order pad.

“Well, uh … ” I stammered, looking at the unfamiliar menu.

“You’ll have the stuffed cabbage,” he said. “And on the side?” (He still was not looking at me.)

“You’ll have the kasha varnishkes,” he said, scribbling on his pad and then hurrying off.

Generous portions of food soon appeared, and I ate it quickly.

“So I guess everything was OK,” he concluded as he watched me mop up a last bit of gravy with a piece of roll.

“You’ll have the Nesselrode pie,” he said, and then disappeared back up the aisle.

Read all recent entries and our submissions guidelines. Reach us via email diary@nytimes.com or follow @NYTMetro on Twitter.